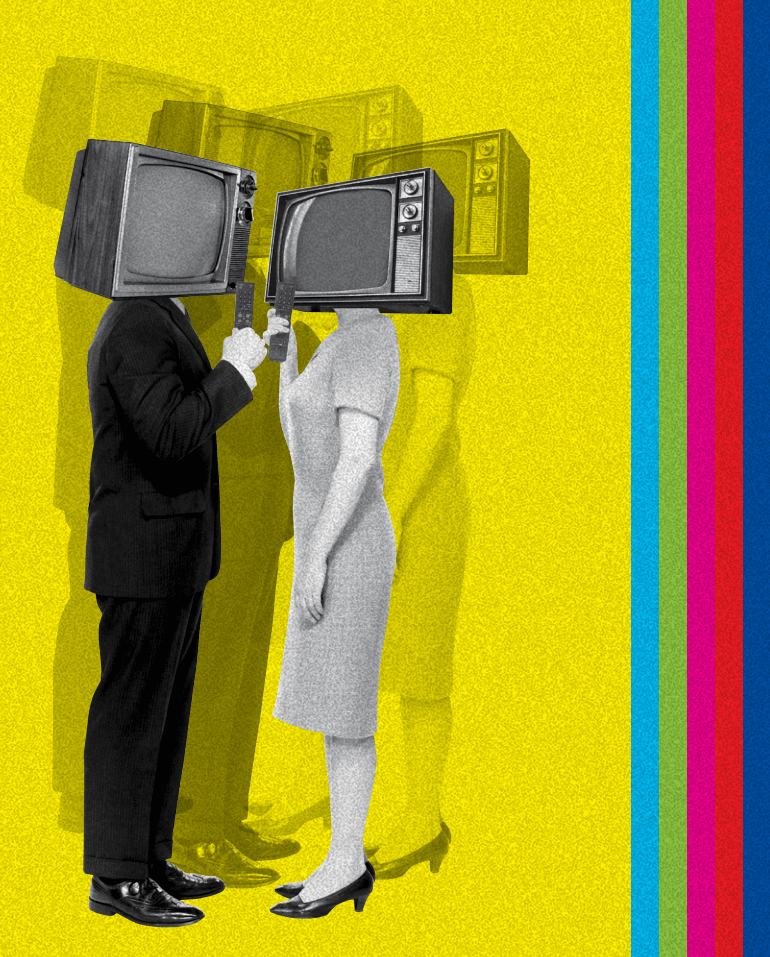 Now that my son is seven, our weekend mornings have gelled into a proper routine. He wakes up at some ungodly hour—earlier, by the way, than he gets up on weekdays—and plays for a while in his room. When he’s tired of that, he’ll grab a couple of granola bars from the kitchen and then find the family iPad. By the time I’m (finally) awake, he can usually be found sitting on his bedroom floor, his face creased into a frown of concentration as he swipes his way through whatever Netflix Kids is currently offering. His current favourites include a cartoon called Masha’s Spooky Stories and Teen Titans Go!, the latter of which made him think it was the height of hilarity to exclaim, “Look at those juicy thighs!” every time I wore shorts this summer.

I can remember the weekend mornings of my own childhood in the 1990s very clearly: the hush of our suburban neighbourhood, the ugly grey carpet scrunched beneath my bare feet and matched the colour of the pre-dawn sky, the impenetrable barrier of my parents’ bedroom door, which I was not allowed to breach until they were up for the day. Like my son, I would help myself to whatever food was available— usually Alpha-Bits, the plain kind, although I coveted the ones that had marshmallows. Then I would head down to our barely finished basement, where I would spend the next few hours watching cartoons. On the surface, this doesn’t seem so different from my son’s routine. But when I try to explain the details of it to him—the boxy old television, the five flickering channels we had to pick between, the fact that I had to wait a whole week between watching one episode of the Ninja Turtles and the next—I feel like I’m describing something so foreign that it’s hard to figure out the words to properly convey what it was like.

Where do I even start when some baseline words hold such different meanings today than they did three decades ago? When I’m telling a story about my child-self making a phone call, I picture myself talking on the big white rotary dial telephone that we had until I was 12; my son, by contrast, imagines me pressing the little green icon on an iPhone. For me, making calls is the raison d’être for the telephone; for my son, calling people is just one app among many. I blew his mind a few years ago when I told him that when I was a kid, phones didn’t have cameras. “But how did you take pictures back then?” he asked. And then: “What about walls? Did you have those? Were they even invented yet?” I can see his point: if this one thing that he considers to be a dependable and fixed part of the universe has not always been that way, then how can he know what to trust? The idea of a universe where phones can only do one thing—and not a very interesting thing, at that—both astonishes and disturbs him.

There is a part near the end of Laura Ingalls Wilder’s 1932 novel Little House in the Big Woods where she describes lying in bed in her family’s log cabin and listening to her father play “Auld Lang Syne” on the fiddle. When he finishes, she asks him what the days of auld lang syne are, and he replies that they are the days of long ago. As she considers this, she tells herself that the “now” she lives in will always be now; it could never be a long time ago. I remember reading this passage as a kid and trying to figure out the paradox it offered. The time that Laura lived in, with its calico print dresses and wood stoves and lack of indoor plumbing, had inarguably happened a long time before I was born. But even though it was obvious to me that Laura’s present had eventually become the past, I was just as certain that the clothing, culture, and technology of the ’90s would never feel old. Even when I became a parent, by which point the decade of my childhood felt like the ancient past, I didn’t consider the cultural gap that would exist between my son and me.

It’s hardest for me to understand how the way we view information has changed. I don’t mean the ways in which we consume it and relay it, although those things are obviously different now than when I was younger; I mean the qualities we attach to it. By the time I was a tween, every bit of media felt so precious. If I wanted to watch an X-Files episode more than once, I had to make sure to record it on my VCR (and then make sure that no one else in my family taped over it). I kept a shoebox full of interviews with Tori Amos, each of which I had painstakingly cut out of newspapers and magazines. If I wanted to read up on the Black Death (I was a weirdly morbid kid), I had to go to the library, find the right keyword in their computer system, and then sift through the chapters of various books until I found what I was looking for. I would often photocopy things or write down quotes that seemed especially important; I remember feeling this urgent need to hold onto everything, because nothing seemed permanent. Once an article or a book or an episode of a favourite show was lost, there was a good chance that I would never find it again.

It’s not like that for my son, though. If he wants to know more about outer space, everything he needs is at his fingertips—YouTube videos, podcasts, articles written by actual NASA astrophysicists. And none of it is in danger of disappearing; after all, once something goes on the internet, it’s usually there forever in some capacity.

This might sound like some kind of value judgment about kids these days, but I promise that it’s not. Greater access to information is never a bad thing. Consider this: my great grandmother grew up in a house with two books (one of which was the Bible) and she probably treated them with a devotion that I wouldn’t be able to muster for any individual volume in my library. Books were, for her, a nearly irreplaceable treasure, whereas if I lose one of mine, I can usually find another copy quickly and cheaply. Would anyone argue that owning literally hundreds of times the number of books that my great grandmother did somehow means that I am somehow living a less wholesome or engaged life?

Like any parent, I have some anxieties about what changing technologies will mean for my kid, but most of them centre around how he will use them to interact with his peers. Will I know what to do if he’s being bullied on social media? What limits will be fair to set on devices that he uses for learning, entertainment and socializing? How can I know if I’m making the right choices, not just making it up as I go along?

Sometimes it can feel like these are questions unique to the past decade or two, but I suspect that every generation of parents has wrestled with them in some way or another. It’s tempting to try to find someone or something to blame for the ways in which the world is changing—over-indulged kids, lazy parents, the technology itself—but to look for a scapegoat is a way of refusing to deal with a fundamental truth about life, namely that change is not good or bad, it just is.

I feel the same way about social media and smartphones and streaming services; they’re a part of our world now, whether we like it or not. There’s no going back to how things were before. Our only choice is to learn to adapt as best we can and accept that the day will come sooner rather than later when our kids’ understanding of how to navigate technology and media outstrips our own.

It’s tempting to dread what you don’t know, and I certainly don’t know what the world will be like when my kid is a teenager or a young adult. But instead of giving into that fear, I’m trying to be excited about the brave new world he’s growing up in. My parents must have faced similar challenges, and someday my son will live through his own season of realizing that the phones, tablets, and computers he grew up with are clunky and obsolete. By then, maybe our respective childhood weekend mornings won’t feel so different from each other; just two more links in the chain of ever-advancing cartoon consuming technology. Until that day, I reserve the right to feel like an old crank every time he asks me to explain the exotic functions of the VCR.