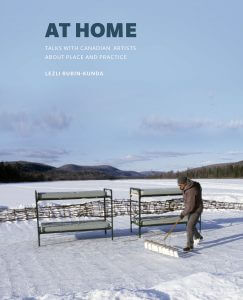 One of the crumbliest of the many old chestnuts rotting away in Canadian art discourse is that all Canadian art is ultimately about the landscape that surrounds us.

This is of course true (that’s how antique ideas last) and also very much not true, especially in an era when the digital presence of art and artists has erased traditional aesthetic markers such as regionalism, wild vs. urban settings, and the very idea (always a fraught one, being built on colonialism) of ownership and self-marked territory.

Just in time to mark this pivotal stage in Canadian art’s fourth wave comes Lezli Rubin-Kunda’s At Home: Talks with Canadian Artists about Place and Practice (Goose Lane Editions) – a thick, generously illustrated book of conversations with Canadian artists whose works unpack, celebrate, and chronicle how we move through our chosen spaces.

In keeping with the book’s chatty tone, I asked three participants – Lezli Rubin-Kunda,  Sandra Rechico, and Susan Fiendel – to talk about their art.

Home, I learned from their responses, is where the mind is.

RM Vaughan: You share an interest in observing and then responding to your surroundings. How did this start, and how do you feel the art you have made has served that curiosity?

Sandra Rechico: I’d say that I have an interest in how all types of people observe and respond to their surroundings. In a way, it’s the quotidian that is of interest to me: racking where I had been in a day or a month, or asking people to make maps of where they had been that day.

Maps have always been fascinating to me, I used to draw them as a kid (I would make up foreign lands and treasure maps), but I expect plenty of kids do that.

I am still very attached to paper maps, whether they be city plans, atlases, nautical charts… at the same time I am very aware at the inaccuracies and politics inherent in maps.

Lezli Rubin-Kunda: My interest started when I was a very young child; I would claim that it is a sensitivity to one’s physical surroundings that one is simply born with, whether artist or not.

As I mention in the book, referring to the dam I made at side of the road and other childhood activities, those experiences that relate to my immediate surroundings and my physical interaction with them are the ones that stick in the memory.

Susan Fiendel: My practice began when I was a young girl.

However, it was the experience of my tiny son’s heart surgery which led me to consider the notion of “intensive care” in all of my future subject matter.

My private thought at the time was that if I am to make art, I truly want my work to be meaningful to others beyond my personal pleasure.

RMV: Any artwork that reflects back to the viewer an environment chosen by the artist is going to contain questions about perception, and the difference between what the artist sees and what might or might not be there. How do you negotiate these distinctions, if you do at all?

SR: My project “May Drawings” was made by tracing my movements through the city during the month of  May for 5 consecutive years.

It was interesting to me that the viewers who easily recognized the city as Toronto in the drawing were people that rode the subway.

They were accustomed to looking at overall plans, while many others couldn’t recognize the city.

It turned out they were people that used the maps on their phones so their view of a map was from a very different perspective. I am fine with both responses and anything in-between.

LRK: There is always a live immediate connection, so that I don’t lose touch with what I am doing or become distanced or estranged from it.

Although I begin my observations at a basic level of connection to the immediate “stuff’ around me, if I stay open, I feel that all my knowledge and understanding come into play.

On the negative side, the work can perhaps remain too simplistic, too limited to my own personal repertoire and horizons.

I value the dimensions of physical reality, the constant connection to the physical, human dimension of everyday life, but I am aware that I might be holding on to the known and the familiar.

RMV: Even though some of the artists in this book work with constructed environments and some with natural (a tricky word), all of them are based on the principle of the artist-as-observer in a very direct way. What are the benefits of this approach and what are the problems?

SR: I think you’re talking about the “dilettante observer of urban life” hat Baudelaire identified as the flâneur and that continues with the Situationists.

I still use some of those psycho-geographical strategies, like the dérive, the unplanned walk, in my practice, but at other times the destinations are very particular.

The practice of recording where I had been created a structure, a daily practice which I found comforting, a specific strategy.

RM Vaughan: The majority of the artists profiled in the book are female-identified, and I don’t think that is an accident. Male artists who work in similar fields often appear, to me, to take a kind of observer-as-definer/over-determining approach. Or am I just gender-reading here?

SR: Historically some male artists may have taken a more over-determining approach.

I do find it remarkable that we take notice when a book has a majority of female-identified artists, it means that it still exceptional, which is really disappointing.

LRK: If we distinguish between men/ women versus male/ female sensibilities (regardless of gender of artist) then yes, clearly the male sensibility has a more active, controlling (destructive) orientation to their environment.

The artists whose process most attracted me were those who slowly, modestly, but with dedication, pursued an interest, followed through on a personal experience or process, allowing their surroundings to speak to them, and not impose on them; to show us, not to instruct us.

SF: The issues of home, of intimate communications, can suggest a gendered approach (to art making). However, male or female, there are cultural expectations that we navigate as best we can.

Workplaces are quickly challenging the “artist at home” or studio expectation.

The world is our work space, while at the same time the idea of home may well drive our thinking.