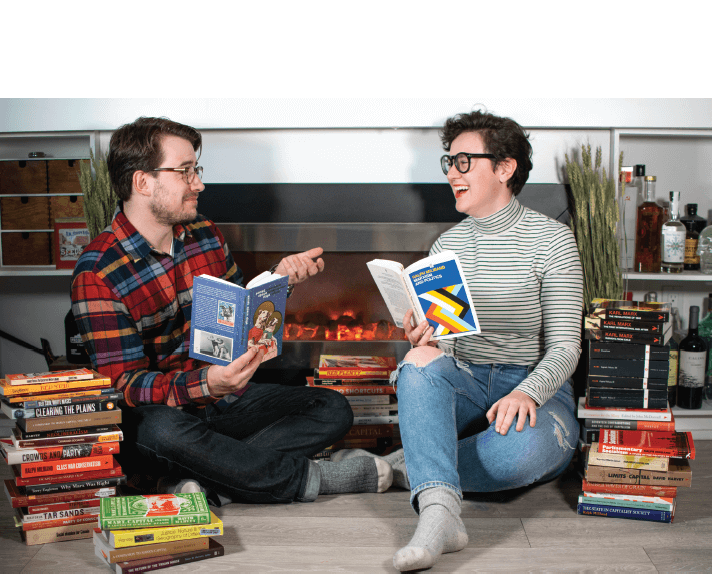 The Premier of Alberta is a Conservative. Every single seat in the province bar one went blue in the last federal election. Despite the severe lack of representation in government, those with leftward ideologies still exist in Alberta. Where can they turn to hear friendly voices? The Alberta Advantage podcast.

The bi-monthly podcast was born in 2017 out of a local Jacobin magazine reading group’s desire for political representation at home.

“We found there was a real lack of any kind of conversation about topics from a left-wing perspective,” says Joël Laforest, producer and panelist with the Alberta Advantage. “We figured we could use the ability to have discussions that we built up as a reading group and try our hand at putting it into a podcast.”

Since then, Alberta Advantage, whose name is a play on a 1990s Tory moniker for the province’s unique tax structure and non-renewable resource-derived revenue, has been lauded as Calgary’s best podcast and now receives over $1,700 a month through Patreon.

It isn’t all awards and donations, however.

“Being left-wing in Alberta has real challenges and material consequences,” says host and sound engineer Kate Jacobson. “We face real risks to our employment and our physical safety…. The right in this province is very organized.”

Jacobson says she’s fortunate enough to have secure employment outside the podcast, but others on their team of about 20 volunteers have to be more clandestine about their work on the Advantage.

“Sometimes it can feel very difficult to live here,” she says. “You’re basically swimming against a tide. There are all these ideas that people have been trained to believe about the oil industry, trade unions, socialism, and the government. You have to counter those at every level.”

Jacobson and Laforest say they’re both particularly proud of a November episode that tackles an advertisement they refer to as “oil propaganda.” Presented by representatives from the Birchcliff Energy and Tourmaline Oil companies, published by a group called Canadians for Canada’s Future and endorsed online by premier Jason Kenney, the ad in question says oil companies have been taken for granted for too long by “all too many people who vigorously condemn what we do while relishing in the fruits of our labour.”

The ad goes on to marry the narrative that oil companies keep the country running with emotionally arresting imagery, such as workers embracing their children.

For nearly an hour, Advantage dissects the ad, which they refer to as a “crypto-fascist piece of media” and part of a concerted effort to make the rest of Canada feel a protective, nationalist pride for the oil industry, as they say Albertans have been trained to do.

Looking forward, Jacobson and Laforest say the Advantage plans to begin producing video and text content for their online audience. They say the latter is particularly important after the folding of StarMetro, Calgary’s only liberal-leaning daily newspaper.