Footsteps quicken behind you, a large physical presence gets closer, sending shivers up your spine. You walk faster, they keep up. Then all of a sudden they pass you, or push you slightly out of the way. Maybe you are scared because a scenario like this has ended a more violent way, or maybe this hasn’t happened and you aren’t keen on it happening. Women haven’t been taught the way men have to be so entitled to space, physically nor vocally.

“Studies show that men interrupt women during meetings, while in groups with friends, and while speaking one-on-one,” writes Lucy Vernasco in Seven Studies That Prove Mansplaining Exists published by Bitch Media July 14, 2014. Rebecca Solnit, author of Men Explain Things to Me, coined the term “Mansplaining.” In her essay, titled the same as the aforementioned book, she shares her experiences with mansplaining, including that of one man who interrupted her to tell her about a book—one that he hadn’t realized she’d written. “The battle with Men Who Explain Things has trampled down many women,” she pens. “Of my generation, of the up-and-coming generation we need so badly, here and in Pakistan and Bolivia and Java, not to speak of the countless women who came before me and were not allowed into the laboratory, or the library, or the conversation, or the revolution, or even the category called human.” 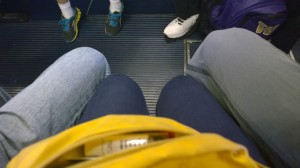 Image from Men Taking Up Too Much Space on the Train

Then there’s the physical space. The perfect example of “public assertions of privilege,” is the blog, Men Taking Up Too Much Space on the Train, a collection of guys enjoying extra space, despite packed public transportation vehicles.

Women are supposed to take up so little space, that even our bodies must be thin. Lily Myers speaks of her parents and grandparents in her spoken word poem, Shrinking Women. While her father and grandfather grow fatter, the women in her family shrink, to take up less space; “Maybe this is why my house feels bigger each time I return; it’s proportional.”

Gender roles tell us that women must be small and quiet, while men must be large and commanding. We aren’t supposed to take up space but men are expected to have, and take, it all. Last summer, during Slut Walk Toronto, it was requested those walking take up as much space as possible. I make this same request to all women.