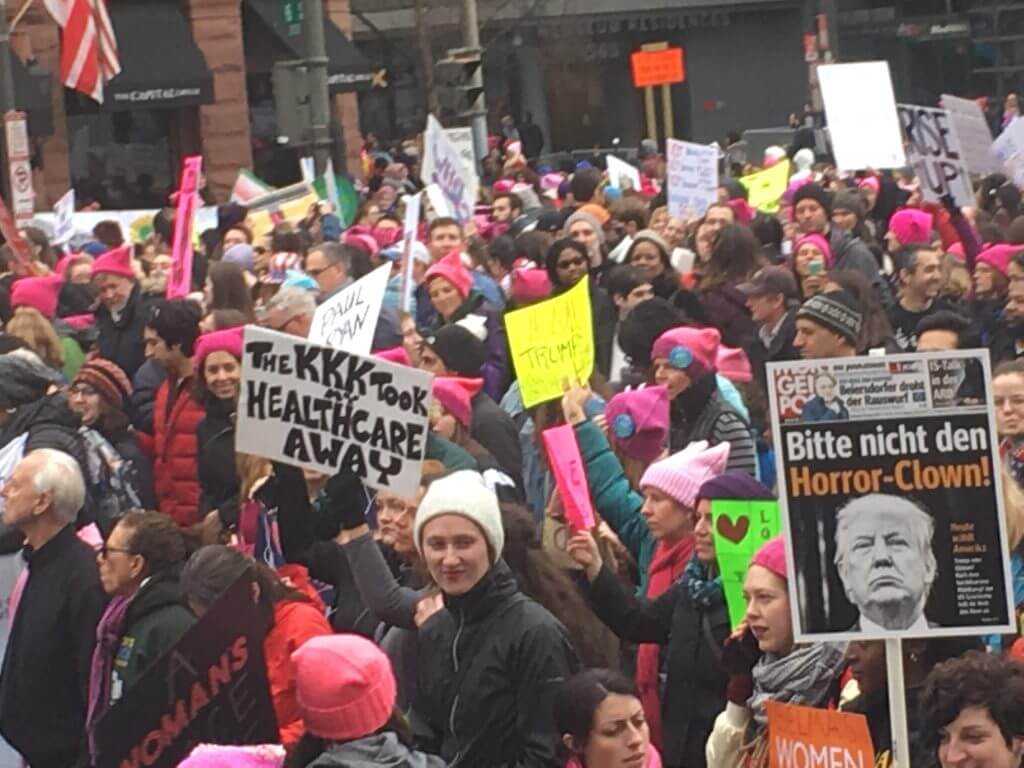 Last weekend, Washington, D.C. was the locus of celebrations marking the transfer of presidential power from Barack Obama to Donald Trump. The traditional ceremonies—from the swearing-in and the inaugural parade along Pennsylvania Avenue to the plethora of balls and galas—coincided with events such as the “Deploraball,” organized by members of the racist, sexist, far-right coalition that calls itself the “alt-right” and that threw its wholehearted support behind Trump. Hats bearing the slogan “Make America Great Again” were a common sight throughout the city, as were blue scarves bearing the name “Trump” in white at each end.

In addition to those grim scenes, the city also played host to myriad protests running the gamut in terms of size, politics, and tactics. A few hundred people gathered to protest the Deploraball on Thursday night, lining up opposite police who used chemical spray on them throughout the evening. There was a sizeable anti-fascist contingent there and at protests the next day; more than a few “Antifaschistiche Aktion” flags, as well as those of various socialist and even communist organizations, could be seen rippling in the breeze throughout the weekend. 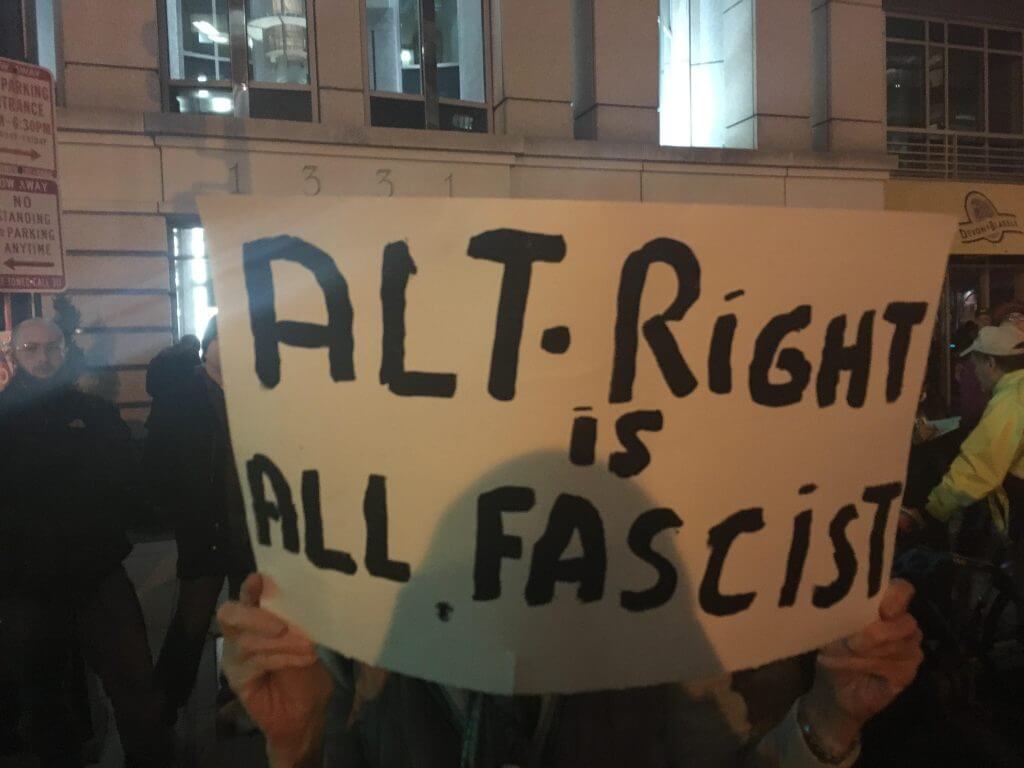 One Trump supporter got into a skirmish with antifa protesters at the Deploraball, instantly drawing a huge crowd of cameras and reporters. It was a fitting prelude to the punch seen ‘round the world, when alt-right leader Richard Spencer—who, despite claiming not to be a neo-Nazi, supports a white ethno-state, has advocated forced sterilization and yelled “Hail Trump” at a conference in late 2016, leading several attendees to do the Nazi salute—was hit in the ear by a masked protester on Friday. Debates are now ongoing regarding the ethics of punching fascists, but if the goal is to stop them from feeling comfortable parading their ideology in public, it appears to have done its job.

On Inauguration Day, several groups, from Black Lives Matter to NoDAPL anti-pipeline activists, formed blockades at checkpoints along the inaugural parade’s route and attempted—in many cases successfully—to prevent Trump supporters from getting through. The anti-war and anti-racist ANSWER Coalition convened as early as 6 a.m. to get protesters onto the parade route. A number of marches converged at McPherson Square for a rally. A group of black bloc protesters engaged in limited property destruction of corporate windows, MAGA hats and, most memorably, an empty limousine; the response from police was aggressive. Flash-bang grenades and chemical irritants were deployed liberally. A group of 222 protesters, legal observers, journalists, and bystanders were kettled and detained, according to the National Lawyers Guild. They are being charged with felony riot, which carries a possible 10-year sentence. 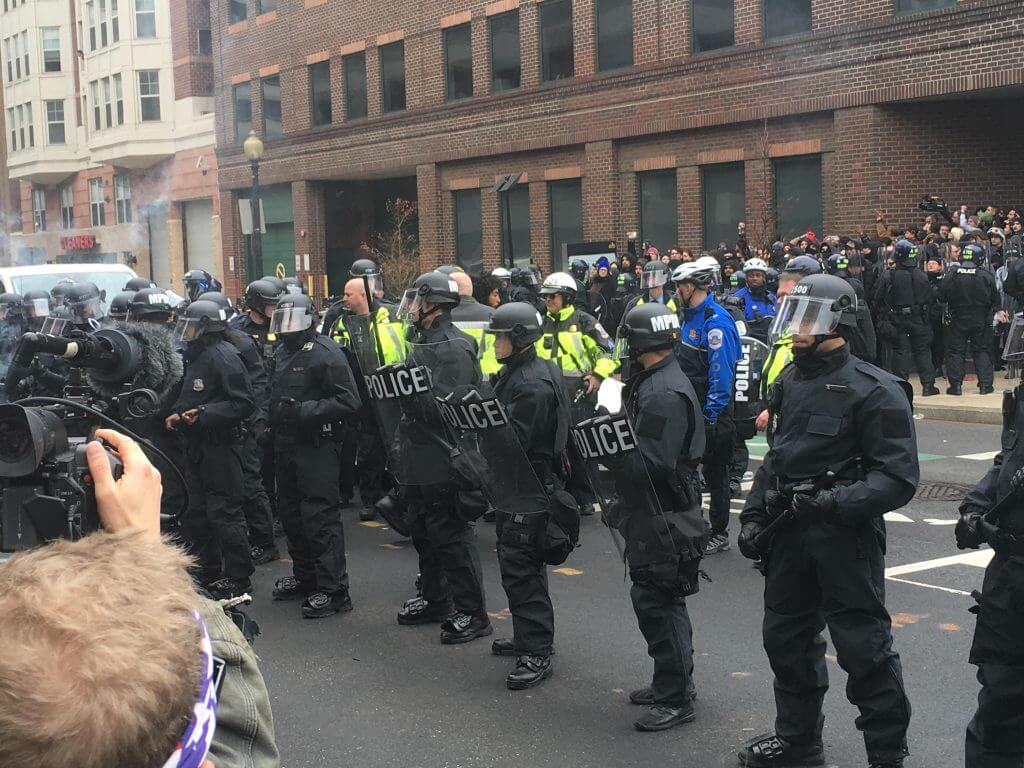 Police line up around a group of detained protesters.

The Women’s March on Washington, the most-publicized protest, drew more than half a million people as well as huge crowds to “sister marches,” with a low estimate counting around 3.6 million in attendance globally on January 21. Easily the largest demonstration of the weekend, the women’s march was also the least overtly political. Many attendees seemed focused on general messages of gender equality and supporting women’s rights without necessarily having considered how best to do that, or what that might mean for women with various intersecting identities. Pink “pussy hats” were everywhere, as were signs that promoted a strictly cisnormative idea of womanhood, and messages from white women thanking police for keeping the peace at the protest pointed to a failure on their part to understand the antagonistic role police play in many women’s lives and in the protests that happened less than 24 hours prior.

It’s unclear if the oppositional energy on display will be effectively harnessed by organizations prepared to push legislators, elect their own candidates and provide alternative means for survival in the meantime, but there are promising signs. The Democratic Socialists of America, billed as the States’ largest socialist organization, has seen its membership skyrocket, and a call-in campaign early in the year led the Republican Party to reverse its decision to gut the Office of Congressional Ethics.

What can we in Canada take from the D.C. protests? Aside from the fuzzy feeling of attending one of the various women’s marches across our fair country, there must be something from this moment of great unrest we can apply to our own political circumstances.

At an event held by Jacobin magazine on January 20 in D.C. titled the “Anti-Inauguration,” journalist Anand Gopal stressed the importance of resisting not just Trump, but “the system that makes Trump possible.” In other words, the failed economic policies that have decimated unions, encouraged stratospheric wealth inequality, promoted corporate gluttony at the expense of the climate and of workers; a foreign policy that patrols other countries with unmanned execution robots, that spies on foreigners and citizens alike, that eats up trillions of dollars without making anyone in the world safer; domestic approaches to policing and housing that disproportionately affect racialized and particularly Black people; and a nightmarish immigration policy that sees families broken up or held in detention.

These are aspects of the dominant agenda of both political parties in the U.S., and as the speakers last Friday night noted, this agenda has failed people to such a degree that they have by and large abandoned hope in the political process. In 2016, as barely half of all eligible American voters cast a ballot, just enough in the right states latched onto a destructive strongman whose promises to help are empty but whose threats to hurt are already being fulfilled.

That agenda exists in Canada as well. As with most comparisons between the two countries, it warrants saying that the situation here is less stark in most cases. Canada fought in Afghanistan but not Iraq; we are part of the Five Eyes spy alliance, but didn’t mastermind the NSA’s intrusion into lives all over the world. We have health care, and a social safety net, even if they’re underfunded. The wealthiest one percent of Canadians took in 10.3 percent of all income in 2013, according to Statistics Canada, while economist Emmanuel Saez calculates that the top one percent of American families took in 58 percent of all income from 2008 to 2014.

But Trudeau’s plans for the “middle class and those working hard to enter it,” his pet phrase for the Canadians deserving of the government’s help, are smoke and mirrors. His party appears to understand that people are unhappy with the existing political order, and are expressing such in the votes for Brexit and Trump, but so far they are unwilling to distance themselves from it in anything other than rhetoric.

We saw a huge presence in Canadian cities on January 21 to protest Trump’s inauguration, but there hasn’t been nearly the same response nationwide to the neoliberal agenda put forth in our country. It’s true that Trump presents a unique and immediate threat to the U.S. and the world, through embracing disastrous environmental practices and the fear of an international conflict instigated by his erratic and bombastic behaviour. He is a uniquely hideous figure in almost every possible understanding of the word. His long and storied history of sexual misconduct, which includes several allegations of assault and harassment and him bragging on tape about assaulting women, certainly provided a focus of protest for women who may not otherwise be drawn to politics.

Heeding Gopal’s words means understanding that the same conditions exist to create widespread malaise and dissatisfaction in Canada. They’re not as advanced, to be sure, but we already have a test of our liberal democratic values on the horizon: Kellie Leitch and her advisors have made the calculation that the best way to win the Conservative nomination is to adopt anti-immigrant xenophobia like Trump. Bizarrely, she’s even begun to tweet like him. Whether her attempt at rabble-rousing will succeed is another matter; it seems unlikely without at least a patina of economic populism and charm, both elements she’s lacking.

Canada is not yet at the point America reached before it elected Trump, but we would be wise to be aware of what might lie ahead. The tide appears to be turning in one country after another away from the neoliberal order, and at present, the far right is the only group in most countries offering anything remotely appealing to the average working person. Now is the time for the left to throw itself into resistance, organizing and offering a full and positive alternative to the politics of austerity and division. An alternative that includes the entire working class, that sees identity and class as a “both/and” rather than an “either/or” proposition. We are in a moment of flux, one in which Friedrich Engel’s call to “transition to socialism or [regress] into barbarism” rings truer than it has in decades. One advantage in Canada is that, if the left is able to rise to the occasion now, we might do so before electing our own barbarian.