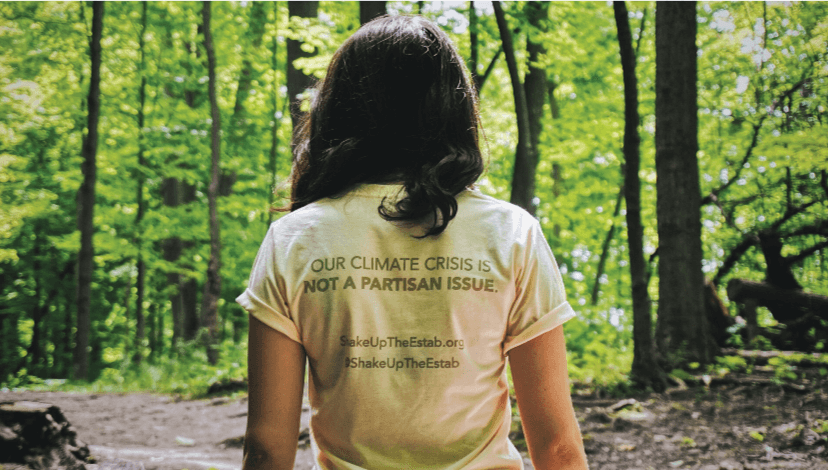 Photo courtesy of Shake Up The Establishment

What happens when two bio-medical science graduates, a philosophy PhD candidate, and an arts major commiserate over climate change in Canada? Positive activism is born.

In April 2019, a group of University of Guelph students and recent graduates, Manvi Bhalla, Janaya Campbell, Taro Halfnight, and Cameron Fioret, were commiserating over Canada’s response to climate change. Disheartened by misinformation in the political sphere, they wanted to make information available and accurate; they decided to act.

“We wanted to make climate change more of a priority in the Canadian federal election and noticed a media frenzy in America on party platform issues a year in advance of their 2020 election,” says Bhalla, an award-winning activist and leader with numerous NGOs. “Yet Canada had not really announced anything despite our election being six months away.”

Shake Up The Establishment, or SUTE for short, was born that evening. “We wanted to shake up the establishment, shake up how we do politics; shake it up with information, positive change and power to the people,” says Fioret.

SUTE’s objective is to increase informed voting and voter turnout regarding the fight against climate change while maintaining positive government relations. The group decided to make all information on their website non-partisan, up-to-date, and fact-checked, citing credible sources, such as academic papers and links to party platforms. It is entirely volunteer-run and currently receives no funding. They may seek out funding in the future, they say, but will never accept partisan funding.

“SUTE is a one-stop hub for up-to-date federal party platform information, not a regulatory body,” explains Fioret. The website’s content is updated weekly with new announcements or party corrections via politician speeches or MP’s offices. “The goal was to encourage people to obtain accurate, up-to-date information [through] a lay summary of climate change, how it works, and how it affects people. We try to add information [to the website] that is as specific as possible [to counter any bias in the media].”

In the week after launching, the four millennials contacted MP offices and the party profiles poured in. Bhalla created a simple, straightforward chart to compare each federal party’s policies and promises on this hot-button issue, which they have categorized by different types of emissions.

“We wanted to provide reputable information from reputable sources to encourage positive activism,” says Bhalla, noting 300 people contacted their MPs within two days after SUTE posted a “how-to reach your local MP” social media post. Another highlight Bhalla shares is when their post, “Breaking news: Canada has declared a climate emergency,” received close to 1,000 likes in one day.

The group has also received kudos from leading climate scientists, 1960s environmental activists and some high-profile media coverage, including a CBC interview, print media features and being featured on a podcast that also included Catherine McKenna, Environment and Climate Change Minister, and Ed Fast, Official Opposition Critic for the Environment. But their most important audience is their growing social media following. On Instagram, for example, hundreds of people tune into SUTE’s weekly Q&A each Monday.

“Youth are very excited and energized. We’ve seen them mobilize [on social media and through letter campaigns], so that’s very exciting,” says Bhalla, noting that SUTE’s most active followers are the 18 to 25 millennial cohort. (Their target audience is 18 to 34 because that is the highest percent of electorate this election.) Bhalla also points out that many of their followers message regularly for updates on certain climate emergencies when the media does not cover it.

“People want to help,” Campbell acknowledges, citing SUTE’s success with shareable social media alerts and campaigns. “But if it’s too hard, it will deter people.”

Armed with easy-to-use letter campaigns and MP contact information, SUTE has provided effective tools for the public to mobilize, speak up and challenge Canadian federal government parties who are not living up to election party promises.

“Climate change definitely isn’t going to go away, even after the election. Our organization is about giving power to the people to hold their leaders accountable in an accessible way,” says Fioret.