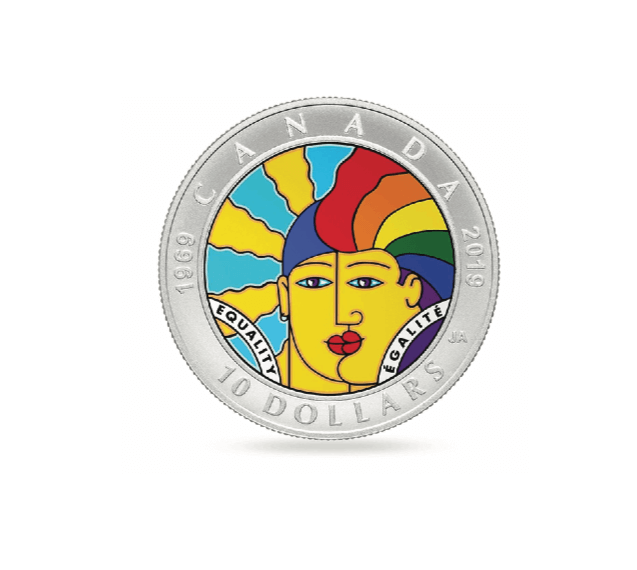 2019 marks 50 years since the Stonewall rebellion, now regarded as the watershed moment in American and even global (Euro-American-centric) queer liberation. A hot summer night at the mafia-run Stonewall Inn in New York City became a six-day-long riot after queers refused to submit to police violence, and its anniversary is now celebrated as the turning point in the course of LGBTQ2S+ history.

The American celebration of this anniversary is marked this year by sponsored events such as WorldPride, as well a plenitude of institutional commemorations. Love and Resistance: Stonewall 50 is an exhibition in the New York Public Library’s main branch on Fifth Avenue, lit in deep lavenders, cobalt, and neon red made to look like the iconic bar’s signage. The show is replete with “little magazines” (what we would now call zines, or chapbooks) and photos of the years directly preceding, and then after, the Stonewall rebellion. Before 1969, the photographs are mostly in silhouette, hiding the identity of the subject; newspaper articles ridiculing pansies and drag queens. Pamphlets, handouts, and other paper ephemera line the walls as the public gains of the era generated more press, more attention and more celebration. It showcases community joy: the dances, the bars, and party culture. But Love and Resistance was deliberately culled in its curatorial scope so that the materials highlight the activism of a first generation fighting for “gay liberation,” but elided any material related to hiv/aids. While this is often how the historical timeline is divided, curator Jason Baumann aimed with this exhibition to inspire our contemporary population to action and activism. By framing the exhibition as a triumph over adversity and leaving out contemporary struggle, the Stonewall moment is effectively neutralized. Stigma around HIV/AIDS; transsexual, transgender, and gender non-conforming people—even the fight for equal employment rights is far from over across North America. There are numerous ongoing struggles in the queer community. These must be addressed through legal frameworks, policy reform, and destigmatization of sexual identity and behaviour within Canada and the United States. The potential energy of the Stonewall anniversary flags in its efforts to galvanize people to activism when it’s positioned as separate and disconnected.

But we’ve made it this far, and we’ve minted it now.

The shining new “gay loonie” was launched on April 23, 2019 commemorating the 50th anniversary of Bill C-150, which is also cited as the Criminal Law Amendment Act, 1968-69, and Omnibus bill of 1969. Our collective memory echoes the words of (Pierre) Trudeau:”…there’s no place for the state in the bedrooms of the nation.” In this statement, he was referring to the reform that was tucked into the bill marking Canada’s first move towards state deregulation of sexual conduct. While C-150 lessened the official censure of gay sex—only acceptable in private between two consenting adults over 21—the taboo of gay life was still a pesky, divisive topic. In the bill there is no mention of the word “homosexual” and instead this bill aimed at widespread decriminalization of sodomy and other sexual acts between two adult persons. The decriminalization of gay sex was a by-product of protections and non-interference by the Canadian government—all the bedrooms of the nation would be safe as long as there was no public display, or group sex. This wall between the public and private served as a thin barrier between pseudo-legality and gross indecency.

Bill C-150 was neither a strident act for the rights of queer people in Canada, nor one that would solve social homophobia. The milquetoast effect of the bill—neither fully legalizing gay sex nor actively outlawing discrimination against queer people—today represents the peak of homobanality that floats into gay villages every summer. Scholars and activists have contested the release and celebration of the coin. The Anti-69 Network is a group of affiliated scholars and activists across the country against the shoring up of the “myth” of 1969, as historian Tom Hooper of York University states. The network points to the underlying insidious nature of the ’69 criminal code reform. Their actions include the organization of the Anti-69 conference, Against the Mythologies of the 1969 Criminal Code Reform, held at Carleton University in Ottawa in March of this year. The conference was aimed to heighten awareness of the increased surveillance of queer life and sex post-Reform. Gary Kinsmen, co-author (with Patrizia Gentile) of The Canadian War on Queers: National Security as Sexual Regulation, mentioned in a conference plenary statement that Trudeau’s famous quote about the bedrooms of the nation has been historically misremembered: while the bedrooms of the nation were safe, very few other places were, because of the differentiation between the public and private sphere, laws regulating group sex and the ways in which homosexuals were seen as simultaneously dangerous and pathological, tolerable only away from the “normal” public. The surveillance and criminalization of queer people in Canada intensified and was more explicit as the parallel gender-based violence of the colonial state continued to inflict assimilationist policies on the Indigenous Two-Spirit communities through residential and day schools, and the drafting of the 1969 White Paper by Trudeau’s Liberal government.

Today, while (Justin) Trudeau marches at Pride celebrations, trans people are often unable to access healthcare because of social and medical barriers and Indigenous Two-Spirit people are subject to heightened violence and discrimination in settler and Indigenous communities. These challenges as well go unaddressed by our cadre of popular and populist political leaders: Andrew Scheer refuses to participate in Toronto Pride, while Doug Ford actually leaves town. We have parades; we have currency, but we don’t have political leaders who care about the distinct challenges in the lives of actual queer people within Indigenous and settler communities. In an election year, the platitudes can be numbing, just washing over us like pink waves, or rainbow smoke.

It’s easy to celebrate the ’69 Reform and our neighbouring queer history at Stonewall as particular, rich moments. To commemorate something, we often want to be able to look back and have uncomplicated feelings about what happened then, how bad it was then, how good we have it now. But celebrating the past means also looking critically at the inclusions or exclusions that make it into, or are left out of, our commemorative ephemera, and exhibitions. In celebration of our collective struggle we owe it to ourselves to pursue a memory that can recognize our past while establishing a dialogue with our present.