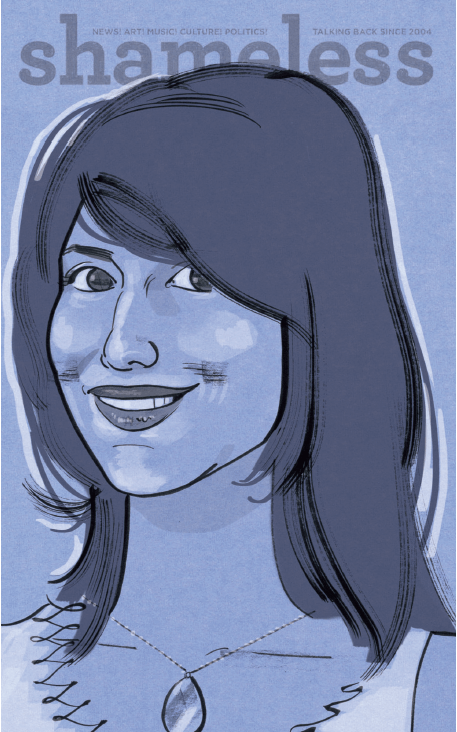 IT’S OCTOBER 2014 and I’m sitting on the floor in Sheila Sampath’s Toronto living room, discussing the progress of the newest issue of Shameless, an independent magazine for teen girls and trans youth. Surrounded by communal snacks, the team talks about contributors and deadlines while trying not to disturb Peter Mansbridge the cat, wary of anyone coming too close to his favourite end of the sofa.

Sampath, who leads Shameless as editorial director in addition to running activist design studio The Public, is alternating between tapping out meeting minutes on her MacBook and programing alerts into her iCal. She’s dressed in a fox motif: there’s a fox face on her pullover sweater, which is tucked into high-waisted short shorts, and her legs are wrapped in opaque tights, with her feet capped off with bright, fox-faced socks. Though this high level of sartorial effort for an informal meeting is marvelous, it’s not that strange; those who know Sampath expect colourful fashion choices. But this one has extra panache. “Oh!,” she says with characteristic gentle enthusiasm when asked about her foxy inspiration, “I’m trying it out for my Tumblr, Professor Femme.”

The idea for Professor Femme, whose tagline reads “undermining the academic industrial complex one brightly coloured outfit at a time”, grew from Sampath’s other other job as design instructor at the Ontario College of Art and Design. When she first took the role, her look sometimes caused her to be mistaken for a student or to not be taken seriously by a new class. “I’m brown, I’m a girl, I have bangs and wear goofy socks. I don’t look like other people who work there,” Sampath says. “I had this moment where I thought, ‘Maybe I should buy a blazer?’ But then I thought no, it’s not me. Plus, I think it’s radical to be femme in an academic space.” Women shouldn’t have to look like men to succeed, she thought. And so, starting with her threads, Sampath determined to say something big with small, continuous everyday choices. The micro-revolution, after all, is her specialty.

Sampath remembers clearly the first electrifying moment of microrevolution nearly 15 years ago at the Toronto Rape Crisis Centre (TRCC). During an anti-oppression workshop, the white women and racialized women were separated to compare notes on navigating the day-to-day, based on how they present to the world. It was the first time Sampath had spoken to women of colour in a political way, learning how systemic oppression wasn’t just about a glass ceiling or affirmative action but how its tentacles reach deep into the human psyche. And then something clicked. It was oddly empowering, says Sampath, to learn that the world stamped her with a societal code based not only on what she did but how she looked.

“Growing up, I had such low self-esteem and felt I never measured up,” she says. “But these women helped me realize that my dislike of myself was also because of a system reflected at me by others. It had honestly never occurred to me before.” It became the kernel of an ambition that would fuel Sampath’s working life, leading the conversation of systemic oppression and collaborating with others on how to pull it up from the roots. But though she figured out the kind of work she wanted to do, she had no idea how to do it. She liked counseling at the TRCC but eventually found it emotionally exhausting; providing front line work required the kind of stamina she didn’t have. So how to help? “I like making things,” she says. “And I thought: ‘That’s what I can do.’”

After design school and a cursory trial with the advertising industry, Sampath helped create social justice design studio The Public in 2008. Its work has received sizable recognition (including a recently-awarded Elder Abuse Prevention campaign for Newcomer Women’s Services of Toronto) and Sampath has cemented herself as a social justice ambassador, frequently appearing on conference and radio panels, including a recent spot on CBC’s The Current. But despite the accolades, The Public is most interested in accessible design, especially through popular education and skill share workshops.

“I learned some powerful lessons when I was there,” says Jessica Bartram, former intern at The Public and OCAD student. Instead of working on client work, which Sampath finds “exploitative, really. They’re here to learn, not to be cheap labour,” all paid interns are tasked with two projects. The first is to design a poster with an ubiquitous theme, like Take Back the Night or Idle No More, that’s free to download on The Public website. Users can tailor the type on the poster, download and print, allowing those without design ability the access to promote worthwhile campaigns in their community.

The second task is to create a skill-share design zine, like Intro to Typography or Intro to Colour, also free to download. Bartram says her first zine draft was really formal, academic writing—what she’d been taught. “But Sheila asked me to rethink it,” she adds. “The process taught me how not to be a gatekeeper of my education with highfalutin language but to be generous with my resources by being simple and clear. That’s a pretty powerful lesson, for design and for life.”

Shameless, the entirely volunteer-run teen magazine, recently celebrated its 10-year anniversary. While it’s roller-coasted through a few incarnations of itself, under Sampath’s direction Shameless has evolved into creating feminist work that aims to dig beneath the surface of gender divide and into the intersection of oppressive forces such as race, class, and ability to cast a spotlight on communities largely ignored by mainstream media. Even so, activist-speak has a downside: It can be intimidating and shut out the curious. Some might know that colonialism has been hurtful but aren’t even really sure what colonialism is, for example, says Sampath, and Shameless allows a space for them to learn.

When Julia Horel began work at Shameless as a web editor, she says she was just starting to become political. “Sheila gave me the freedom and support to explore it,” says Horel, who is now the magazine’s publisher. “It can be a scary thing, but she gave me the space to grow my education and voice without any judgment. She taught it’s courageous to say you don’t know something but are willing to learn and she doesn’t shame anyone for not being ‘activist’ enough because she knows she’s still learning, too. If I can now offer any leadership to others in this kind of way, it is 100 percent because of Sheila.”

“Work at The Public and Shameless can be pretty insular,” Sampath tells me as she untwists an Oreo. “You make this thing and then out it goes; it’s hard to measure the effect.” But then, she says, you see dozens of people come to a magazine launch, or thousands leave notes for a poster campaign on Tumblr, as was the case with The Public biphobia awareness campaign, This is Our Community. “Ya, that kind of thing makes me feel good as a person and a maker, sure, but I also realize it means something to people in a way that has nothing to do with me. And then you think maybe these little things that you do are connected to really big things and that’s connected to making little feelings. If everyone’s little feelings exist together it can lead to big, collective feelings. And that can change something.” She peaks up between her Sheepdog bangs, “Want an Oreo?”