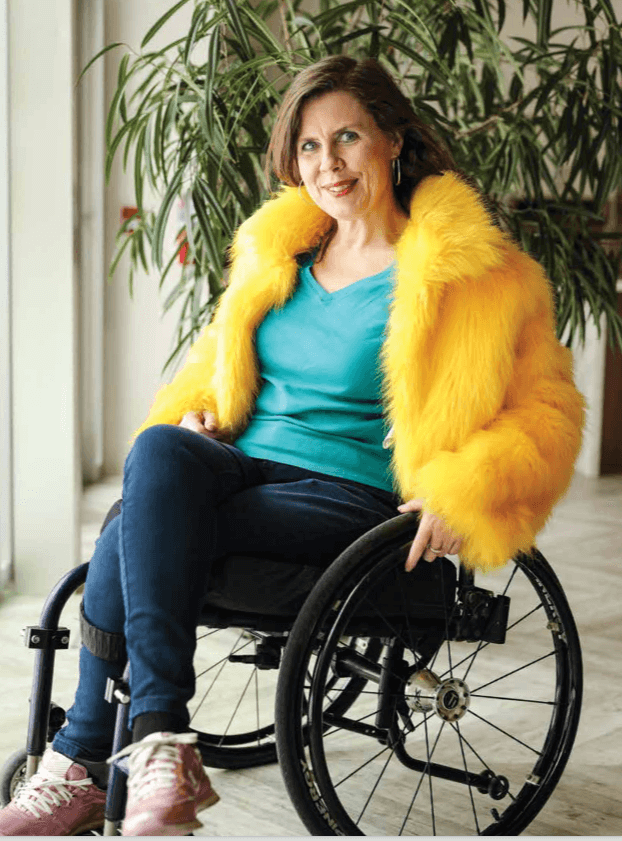 Debbie Patterson stands in a circle with her castmates, swaying from side to side, from crutch to crutch. The group is performing The Threepenny Opera, a 1928 German musical critiquing capitalism. The cast consists mostly of disabled theatre artists—and that’s especially powerful in this context: Living with a disability directly challenges capitalism, according to Patterson, in that it demonstrates “people have value beyond their ability to produce.”

Patterson is the founder and artistic director of Sick + Twisted Theatre, a company that has been bringing explosive, unapologetic productions with disability at their heart to Winnipeggers. Motivated by the idea that “theatre is for anyone with a body,” Sick + Twisted counters the notion that “we have nowhere to put [disabled bodies] other than to objectify them.”

Patterson has multiple sclerosis (MS). She also has a reputation as one of the hardest-working people in the Winnipeg theatre scene. I first met her two years after my stroke and was immediately drawn to her fierce commitment to the craft. In 2017, I performed in Sick + Twisted’s Lame Is… , a disability cabaret featuring about 20 performers. I wrote and performed an existential poetry piece about my condition, and a bouffon clown played my epilepsy. In this role, Patterson chased me around the stage, trying to knock me over as I recited my piece. The next year, I told the story of my medical history in a spoof of the musical number “Cell Block Tango” from Chicago. These performances forced me to perform aspects of my disability and neurodiversity and reveal myself in profound ways, often through the absurd.

When Patterson was diagnosed with MS in 1999, she was sure there was no place for someone like her on stage. She feared her noticeable limp would undermine any play she was in. So for more than a decade, she shifted her attention to writing and directing, convinced that no one wanted to watch a performance intruded upon by her “aches and pains.”

Then in 2012 Patterson was writing Sargent & Victor, a play exploring an infamous intersection in Winnipeg’s West End, which had in recent years become a low-income, high-crime area. The late Iris Turcott, a pillar of Canadian theatre, was giving feedback on the project. Turcott opened up Patterson’s perspective, by saying: “What’s happened to this neighbourhood is what’s happening to your body.” The comment helped Patterson start to understand the dramatic potential of her body on stage—how it could support and enhance performances. And so she expanded the play to Sargent & Victor & Me, and she included monologues about her condition alongside interviews with people who lived in the area. She felt that a radically different company would be needed to produce this highly personal work. And so Sick + Twisted Theatre was born.

Sick + Twisted enables performers with diverse physicalities to create work that speaks to the human condition that awaits most of us by the end—the true nature of mortality is to be limited. This company builds narratives around people who have learned from being limited for a longer time than most. Patterson’s writing often looks death in the eye and explores how we prepare for it. For example, her play How To Deal When You Just Can’t Even, which was read at the 2018 Carol Shields Festival, follows a woman with cancer who refuses to undergo chemo and instead embraces death on her own terms. As Patterson puts it, “All of us live with the crushing truth that our bodies cannot support what our imaginations believe possible.”

By equipping people with disabilities to work professionally in any theatre company, Patterson is making sure our stories will be told more widely, and that there will be diverse bodies and brains on stage, sharing subversive and challenging narratives. Ultimately, Patterson says, “the goal of Sick + Twisted is to be obsolete.”