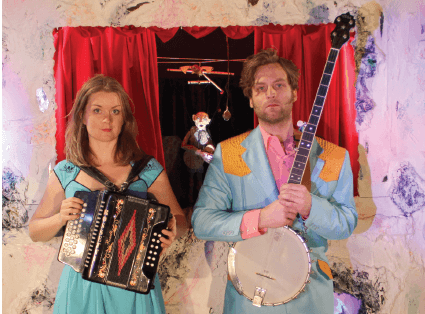 The wonderfully non-human retelling of a Canadian novella on stage

IT’S A STORY that needs to be retold.

“The Faustian bargain is a classic hook,” says Gil Garratt, referring to Derek McCormack’s 2008 novella The Show that Smells. Garratt is adapting the book for the stage via Clawhammer, the small company he founded in 2011 and that he runs with his wife, Gemma James-Smith.

The story rests on Jimmie (as in Rodgers, the real-life country singer and yodeller). As he lies dying of tuberculosis, which actually killed him in real life in 1933 at age 35, Jimmie is visited by another historical figure: the 20th-century Italian designer, Elsa Schiaparelli, who is not as she seems here. (She died at 83 in 1973.) Vampirish and devilish, Schiaparelli offers to restore the singer’s health in exchange for his wife Carrie’s participation in her latest project, a perfume. Coco Chanel, a contemporary and rival of Schiaparelli’s, and the Carter Family Singers intervene as well.

“Visually, it called to be staged, built, seen,” says Garratt, who is also artistic director for the Blyth Festival. The Clawhammer production, The Show that Smells (or The Last Temptation of Jimmie Rodgers)—running May 13–31 at Toronto’s Theatre Passe Muraille Backspace—is an intensive project. Along with writing, performing and producing, Garratt and James-Smith operate the sound and lights. They also provide the voices, music and movements of the puppets who play Rodgers, Schiaparelli et al.

James-Smith, who works as a studio assistant with Ronnie Burkett Theatre of Marionettes, researched images, stories and recordings of the characters’ real lives for her design drawings. She and Garratt also studied Schiaparelli’s designs, the sculpture of Swiss surrealist Meret Oppenheim and the work of Canadian artist David Altmejd, whose image is on the cover of McCormack’s book.

Once the drawings were complete, James-Smith and Garratt started writing. “Once we had a storyline laid out, we began to actually build the puppets,” she says. The puppets are made of wood, wire, Paperclay (a kind of paper maché, James-Smith explains), glass eyes, human hair, assorted fabrics and, of course, string. Construction took nine months, with much experimentation and “engineering” involved to ensure the marionettes moved properly, from joint rotation to maintaining posture (no lolling heads). 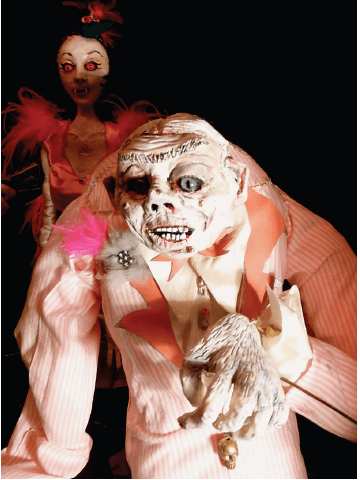 “We wanted to find ways to make objects that were themselves beautifully conceived, meticulously and deliberately constructed, but also hideous and nightmarish,” explains Garratt. “The puppets [are] simultaneously portraits, caricatures and monsters.”

Last year, the pair publicly workshopped the play. Leading up to that performance, they met with McCormack several times. Garratt recalls playing Rodgers’ tune “T.B. Blues” for the author in their living room. They all fell silent afterward. “It was a moment when the emotional core of the show became clearer,” says Garratt. It’s a play with heart: lightheartedness, silliness, and a dark heart, too.

“Derek has done this brilliant thing with the tone of the piece: it’s outrageous, and very silly, and yet incredibly disturbing, too,” says Garratt. “And the ending is actually quite moving,” Figuring out how to translate that tone to live theatre has been a big part of the challenge. Improvisation helped, according to James-Smith: “When we presented the workshop, we improvised quite a bit also. A lot of new characteristics came out of that, informed by the audience and our heightened energy.”

The play is a roughly 70-minute performance with no intermission. Though they’re still developing aspects of the production, some things are fixed: Garratt’s fondness for operating—playing—Schiaparelli, for example. “I won’t share,” he says. The couple takes turns playing Rodgers. Considering Clawhammer is a two-person operation, this particular string of performances will test their endurance. “The show is definitely a workout for both of us,” says James-Smith. “It can be a bit of a bloodsport. We push each other a lot,” says Garratt.

But it works because they keep pushing each other, say these partners. They wouldn’t trade it for anything.