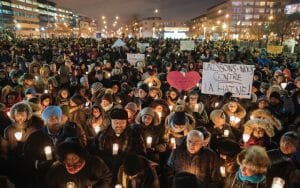 ON A COLD NIGHT IN DECEMBER 1989, Rachel, a first-year student at McGill University, was sitting in the emergency room with a friend suffering from a migraine.

About an hour after they first arrived, paramedics began rushing women on stretchers through the ER. Rachel’s first response was confusion: She couldn’t understand why so many women were injured, on what appeared to be an average Wednesday.

It was only the following morning that she learned they were victims of the École Polytechnique Shooting, the worst mass shooting in Canadian history. “It was awful,” Rachel, whose name has been anonymized during reporting, says. “I will probably remember the details of that forever.”

I wasn’t alive then, but as a young woman growing up in Canada, I’ve been told about that night and its aftermath, watching the names of the women who died scrolling across screens in school assemblies.

I learned that a young man named Marc Lépine went into an engineering class on one of the last days of the school year and separated the women from the men. After declaring his hatred for feminists, he killed 14 young women, some of whom were about to graduate. I learned that we call December 6 the National Day of Remembrance and Action on Violence Against Women, established in 1991 after a national debate about who or what was to blame for the tragedy.

Two winters ago, I watched another tragedy unfold before me, in real time: Quebecers were attending their evening prayer in the Islamic Cultural Centre of Quebec City. It was snowy and cold, typical for a January day.

Across the border, President Donald Trump had just issued the first travel ban against citizens of seven predominantly Muslim countries, causing mass panic at airports across the United States. A young man named Alexandre Bissonnette attended the evening worship at the mosque. Then, he killed six of the men worshipping there. Most of the world didn’t notice.

That night, CBC’s The National devoted about five minutes of airtime to it. (On the night of the London Borough attacks in the U.K. later that year, they spent several hours reporting live). Where searches about the Boston Marathon bombing on CBC, the Globe and Mail, and the Toronto Star revealed 768 results, there were only 194 results related to the Quebec mosque shooting.

Remembering the six men who were killed and the causes of the violence did not seem like a national priority.

After witnessing the real-time forgetting of this event, I spoke to over 40 Canadians, including to Rachel, as part of a research grant from Stanford University. (Those who participated in the research were anonymized, and I have kept their identities hidden throughout the remainder of this story.) I asked questions about those two dates—January 29, 2017, and December 6, 1989.

What did we do in response?

I interviewed people on subway platforms, in shopping centres, and on the streets of Canadian cities, including Toronto and Montreal. I wanted to know:

Why are some tragedies less memorable? More easily forgotten? And what does that say about Canada’s national identity?

The answer, I found, reveals a complicated story of how Canadians understand themselves.

WHEN I ASK RACHEL ABOUT THE Quebec mosque shooting, her voice changes; she seems detached. “I just remember, obviously, feeling the pain for the families, and the usual outcome of these events, which seem to be more frequent these days,” she says. “When something hits close to home like that, I don’t know, that’s when I become most sensitive to it. I can’t remember the exact situation though—was it a young man?”

Many of the people I interviewed expressed similarly vague sentiments. They spoke from places of removed sympathy, often expressing their disbelief that such a thing could happen in Canada. “I think that could not happen in Canada; that’s not the Canada we know,” one person tells me. “It was a shock, it was a surprise…That was the biggest challenge, what was happening with the image of our country.”

But above all, the people I talked to could not or did not name Bissonnette’s targets, who were all Muslim, men of colour, immigrants. Most often, the words used to describe them were “victims,” “innocent,” or “people.”

Meanwhile, the majority of people could easily name women as the intended targets of the Polytechnique shooting. Over and over, they repeated this enduring fact: Women were singled out by the shooter and killed because they were women. But the majority of those I talked to could not recall that Muslims were attacked in January only a year before.

“I do remember that,” a young man tells me, about the Quebec mosque shooting, “and I do remember that there was a priest there, and that they had slaughtered a lot of people, in some random attack,” (emphasis added).

Stripping any identifying features of the victims, he makes no mention of Islamophobia, Bissonnette’s governing doctrine, or why he actively targeted this particular space of worship—as did so many others I interviewed. This kind of abstract, universal language did not just show up in the people I talked to.

In Parliament after the attack, Conservative MP Scott Reid introduced Motion No. 153, which would “declare January 29 Canada’s national day of solidarity with victims, whatever their faith, of anti-religious bigotry and violence,” (emphasis added).

For him, the date did not signify an attack against Muslims or an act of Islamophobia but of violence against religion more broadly.

Are these Canadians avoiding the words “Muslim” and “Islam” deliberately? Even if done unconsciously, the way we remember and contextualize matters.

Last November, Statistics Canada released data showing there has been a 151 percent increase in hate crimes against Muslims in Canada in 2017—more than double the year prior.

Further, the National Council of Canadian Muslims (NCCM) named 70 instances of hate crimes against Muslims in 2017—including hateful posters and vandalism seen in cities across Canada like Toronto and Winnipeg, graffiti sprayed on mosques, and a bomb threat at Concordia University targeting Muslims. In Barrie, Ont., this summer, a Muslim woman sitting by the lake with her daughter was approached by a man, who asked them, “Where are your guns and bombs?”

The Quebec mosque attack was not a random, outlier event; it fits into a pattern of growing anti-Muslim sentiment and violence in Canada. Indeed, six months after the attack, hate letters and a defaced Qur’an were sent to the same mosque. And one month after that, the mosque president’s car was set on fire.

IF CANADIANS DON’T SEE Islamophobia as a problem, or regard the Quebec mosque attack as random, how will we work as a country to prevent this ongoing violence?

There are explanations for why so many I interviewed could not name Muslim men as the victims of the attack. One is that white women more closely align with society’s assumptions of what victims look like, whereas racialized men are often associated with threat, terror, and aggression.

It comforts white Canada’s (racially biased) assumptions to ignore how Bissonnette targeted his victims, and instead to see it in a universalized way.

At Yorkdale Shopping Centre in Toronto, a woman tells me about the mosque attack, “I couldn’t believe it was something that was happening in Canada. It seemed so wrong, especially where it happened, where they were praying, it seemed really sad.”

The way we frame events in history is not an apolitical, or abstract process; it is often fought over.

In the case of École Polytechnique, feminists fought for how we now talk about that tragedy. They insisted that Lépine’s actions were not simply those of a madman, and pointed to how Canada had long been experiencing a largely invisible epidemic of violence against women.

It is because of their actions that the majority of Canadians I talked to saw the day of December 6 as an emblem of gender-based violence. In a discussion in 1991, Senator Suzanne Duplessis told Parliament:

“By recognizing December 6 as a national day of remembrance and action on violence against women, Parliament will send a signal to those women. As members of this House, we will be
telling them that we know such violence takes place, that we know of their trauma and that they are not alone in their suffering. We will be inviting them to join us as we move forward together
to eradicate violence against women from Canadian society.”

Like the feminists who organized to make December 6 a day of action and reflection, the NCCM are at the forefront of making January 29 similarly designated. In January of 2018, they circulated a petition online, and sent a letter to Prime Minister Justin Trudeau calling for the day to be known as a “National Day of Remembrance and Action on Islamophobia.” Yet this November, they sent a new request to Parliament asking for the special designation of January 29, which was endorsed by more than 100 other organizations.

This letter argues that January 29 should be known as the “National Day of Action Against Hate and Intolerance.” This move toward the more generalized language speaks to the fraught project of naming, in glaring specificity, anti-Muslim violence. To gain greater support, the NCCM now is calling for a generalized designation.

Just like I was taught about École Polytechnique in school assemblies so many years ago, designating January 29 as a day of remembrance—even more generally labelled—would teach young Canadians about the very real epidemic of violence against people of colour in Canada, and instruct them to act. It is not a perfect or complete solution—but it is a start.

Senator Duplessis, in her speech about December 6, said: “For all Canadians, women and men, who had believed that we lived in a progressive society, a society of compassion and the pursuit of equality, the event has been a reminder of how far we have to go.”

We can’t continue to live in disbelief that such violence can happen in Canada. It has happened and will continue to happen, if we cannot adequately name the problem we are facing and start to address it.