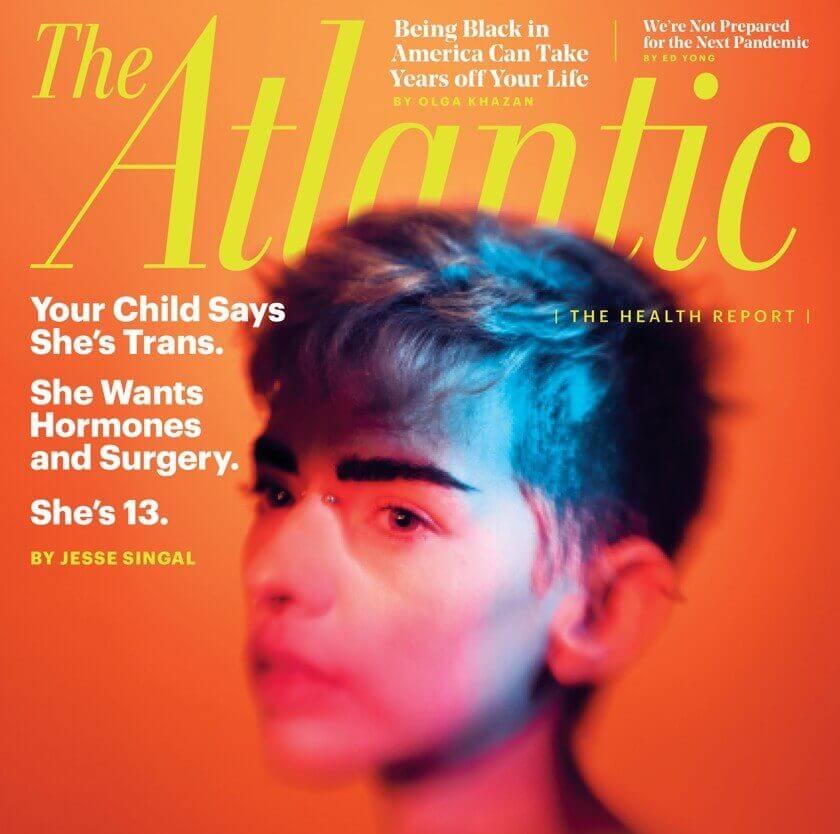 Over the summer, I worked on two articles about non-traditional gender transitions, and interviewed 11 people about their experiences. Through email, over the phone, and at their kitchen tables, I talked with transgender people across Canada and the U.S. about navigating their transitions through the medical system—using hormones irregularly, ordering medications online, lying to doctors, languishing on waitlists, pleading with specialists, and begging to be treated with dignity.

Some of the interviews were heartbreaking. Others made me laugh: From counterfeit prescriptions to homemade hormone therapy, trans people have an impressive capacity to overcome obstacles in outlandish ways. I am continually blown away with the resourcefulness of my community, and those who persevere despite a minefield of opposition from parents, principals, politicians, pathologists, and care providers.

The week after my last interview, Jesse Singal’s controversial cover story about “detransition,” or the process of reversing one’s transition, debuted in the the summer issue of the Atlantic.

For many, the article was groundbreaking. I disagree. Singal’s piece, like most stories about detransition written by a cisgender person, goes like this: We meet a hypothetical girl who’s too young to know better. She and her parents are taken down a rabbit hole of suggested medications by an overeager activist medical team. We then meet a number of other girls who once fell prey to the same conspiracy, realizing too late that they were being led astray by wolves in white lab coats and the hairy-legged harpies of the transgender movement. Their fight against the trap of transition is a tale of science and circus, men playing women playing god, and the crises facing the modern medical system in a climate where feelings dominate over facts.

I’m exaggerating, of course, but not by much. Detransition discourse is embarrassingly formulaic and cartoonishly redundant, recycling the same tropes to create the image of a girl gone wrong. These kind of articles misrepresent facts and sow panic—over the loss of girlhood, the end of innocence, and the theft of women’s bodies from the realm of male property. It’s heterosexual border policing dressed up as clickbait.

In reality, most of what we’d call “detransition” occurs among transfeminine people who were assigned male at birth. That’s because of the amount of time, energy, and money involved in living decently as a transfeminine person—and being a transgender person in public is a high-risk exercise. Trans women, particularly women of colour, deal with hostility in almost every facet of daily life, from using the washroom to buying clothing to looking for jobs.

In some ways, “detransition” works as a temporary self-preservation tactic. Advocating for yourself is exhausting. Unless you have money and a great community to fall back on, there’s little in the wider world that’s telling you, “Keep going.” Gender-affirming care is also considered the safest approach to transgender health care.

With the exception of Singal, cisgender writers have recently begun talking to transfeminine people about their detransition experiences. But these articles are equally as misrepresentative. They function as cautionary tales, warning of the power of some mythical “transgender lobby” and presenting their subjects without nuance or context. One particularly egregious example republished in a mainstream Canadian newspaper states that detransition most often occurs in trans women over 30, but provides no context for why that may be the case.

As writers, there is no one among us who is not guilty of oversimplification. And it’s true that, in our rush to defend what rights we’ve have obtained, trans people may find ourselves fighting for narratives that more closely resemble pathology than reality. Being transgender isn’t something I believe should be understood purely in the framework of diagnosis and treatment. Yet I often find myself defending this perspective to push back against attempts at barring us from access to transition-related care.

Detransition discourse restrains how people speak about themselves and their experiences. It leaves no room for talking about trans lives as richer than just risks or symptoms. The way cisgender people write about detransition reflects assumptions about transgender experiences as binary and linear. In these stories, trans people aren’t recognized as human beings living real lives; they’re simply characters playing their part in a cautionary tale.

But when you talk to those who do detransition, their stories are far more complex. There are few people who once identified as trans that now consider themselves cisgender. Instead, they often have a changing relationship with what it means to embody their gender. They may delay medically transitioning, start and stop hormones, or redefine their relationship with a gender binary. I have at least five friends who have done this. I’ve done it myself. And many people who stop their transition end up resuming it in some capacity. We’re taught to see transition as some sort of irreversible, seismic event. In fact, we should recognize transition—and by extension, detransition—as an ongoing process of self-actualization and navigation.

People’s experiences evolve. They should be free to make choices to reflect their experiences without cisgender people weaponizing them against other members of their communities. These people aren’t representative of anything other than their own experiences. They are not characters in a grand narrative; they are human beings.