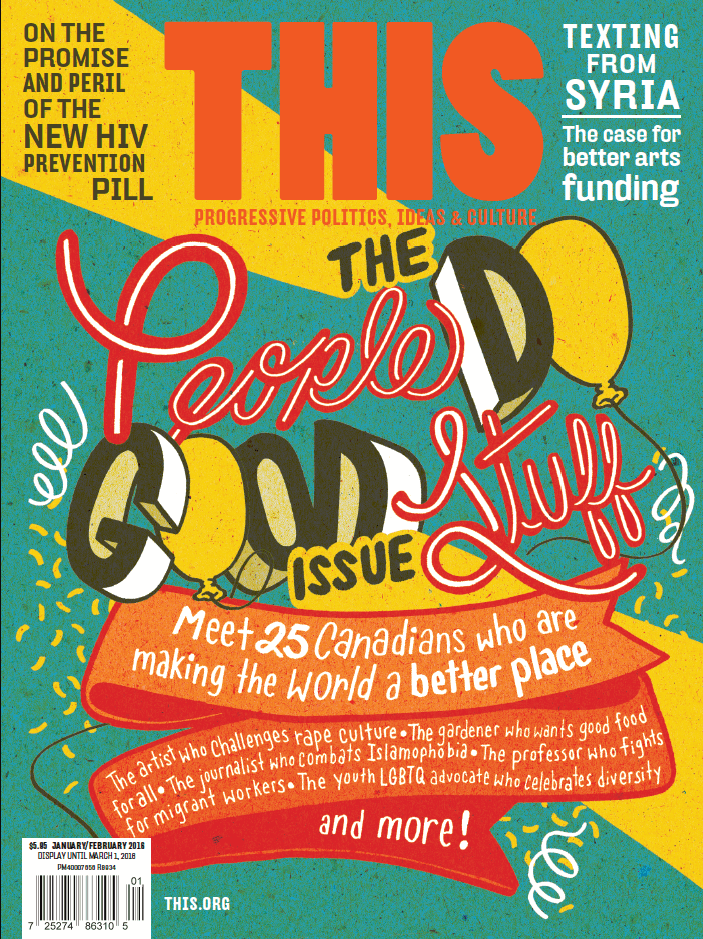 HERE AT THIS MAGAZINE, we spend a lot of time focusing on what’s gone wrong in Canada. It’s our job as independent media to loudly speak out and brightly shine a light on issues too often left in the dark. And there is, after all, so much that’s worth criticizing: violent Islamophobia; an ever-deepening rape culture; shrinking access to abortion; growing anti-black racism; and so much more. Sometimes the world seems like a gloomy, hopeless place, indeed. There are days I’m half (okay, fully) tempted to fill the office with an absurd number of kittens just to lift our spirits and to remind us it’s not all bad out there.

A better solution (and one that stops me from embarking on a very illegal but adorable kitten-robbing spree) is our annual issue focusing on all-star Canadians working to make the world a better place—renamed this year to reflect our simple goal of highlighting people who are doing good stuff. From fighting for aboriginal, LGBTQ, and women’s rights, as well as better access to food and mental health services to fighting against Islamophobia, discrimination, harmful stereotypes, and race-based violence, these 25 people doing good stuff give us sunshiney hope for the future. (And keep certain magazine editors from turning the office into a kitten jungle.)

Inside the feature package, you’ll find in-depth profiles of inspiring Canadians whose activism and advocacy work incites change, gives communities agency, and empowers those who believe in a more just future. There’s the radical historian who leads walking tours to reimagine iconic neighbourhoods; the former journalist who works to end dangerous, discriminatory anti-Muslim sentiment in the media; the Indigenous student who challenges damaging, limiting Aboriginal stereotypes in the education system and beyond; the hip hop artist who raps for human rights and social justice; and more. You’ll also find a map of Canada with shorter profiles of people doing good work across the country—some of them even nominated by you, dear readers.

We know this is, by no means, a comprehensive list. Our country is vast and while it may often feel like the world sucks, there are plenty of kick-ass, brave Canadians who are working to create a kinder, better, fairer place. So please, tell us about the people doing good stuff in your communities. In late 2015, we launched a new This department to highlight our all-stars on an ongoing basis. If you know somebody who’s doing good stuff, let us know. We want to feature as many as we can! Until then, read on, be inspired, and maybe go pet a kitten.

This issue is available to buy on newsstands now—or better yet, subscribe and get the issue delivered directly to your door!

Lauren McKeon is the editor of This Magazine and a self-proclaimed cat lady. She hopes you enjoy reading The People Do Good Stuff issue as much as she did.