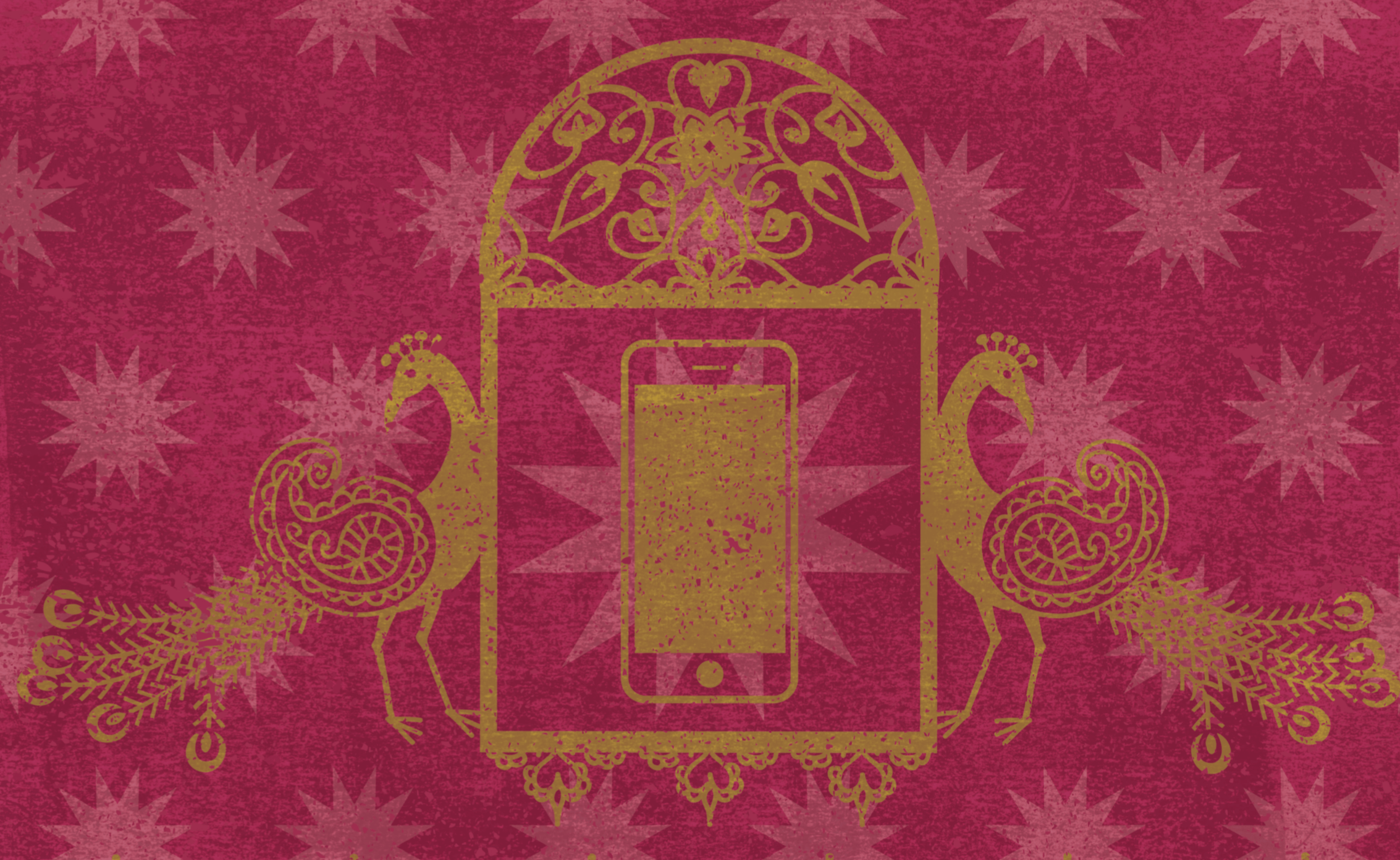 You still didn’t feel comfortable drinking in front of your parents. You texted “bless you” to Vikas, as he received your drink from Sumeet Uncle at the open but not self-serve bar. You then said the same words out loud when the cold glass met your sweaty palms. Vikas was your best friend and a recovering alcoholic. He’d once tried to tell his parents, explaining about AA, the Twelve-Step Program. But disease to them was physical and microscopic: a virus, bacteria, something happening deep within in your cells. And even if they could concede that a love of Johnny Walker was infectious, they couldn’t grasp this concept of therapy: gathering with strangers in a gymnasium reciting the Lord’s Prayer. Why didn’t he just tell them when he’d reached the tipping point? Why didn’t he just stop? You took a sip. Bless you, number three.

Some of the middle-aged women were singing along with your aunts, one of whom had taken charge of the dholak and was keeping a lively beat. Though the lyrics were in Punjabi, you couldn’t help but hear them in English. A lot less rhyme, a little more reason.

Other women were dancing, their shoulders moving up and down in time with the drumming, their henna’d palms pointed to the plastic canopy, their saris flashing intricate patterns, gazes locked towards one another. Even the eldest woman there had abandoned her constant private recitation of Hari Om, Hari Om, Hari Om, and was now tapping two spoons together. You’d been keeping your eye on one man. The older generation called him “Sethi Saab”, the younger, “Sethi Uncle.” When you were eleven, your family would visit the two-bedroom apartment where he lived with his wife and daughter. In the time it takes to aim an autofocus lens and shoot, “Uncle” would corner you, grab hold of your shoulders, and press his lips tightly against yours. It only stopped when you’d moved away to university.

That was where you’d met Vikas. He was only on the path to alcoholism back then. He taught you to read John Ashbery, appreciate organic chemistry, and play pool. The first time you found yourself behind an eight ball, Vikas came over to your side of the table to move the white cue ball out the way. That’s when you’d told him. Why didn’t you tell anyone? I don’t know. Did it happen every time? Every. Single. Time. How long did it last? Three to six seconds. Four point zero seven, on average. What did he say? You are looking so grown up now. He didn’t ask you what you wore. But you knew. Tight Sergio Valente jeans, size 24.

Tonight, Sethi Saab looked distinguished with his grey temples and black Nehru jacket, unmarked. In fact, he looked happy. Perhaps he’d repented. Perhaps he’d donated money to the Violence Against Women Campaign or the World Wildlife Federation. All those battered women and pandas. You realized you’d forgiven him. You were having a hard time getting upset about anything or anyone. You’d had two gin and tonics.

It was getting dark and lanterns had been lit. People were still taking selfies. You saw Sethi take a tween named Meena by the shoulders, smile, and give her a hug. It lasted more than five seconds. You took your phone out of your beaded red purse and held it up to the night. At the same time, the girl pulled away and held her smartphone up to his face. You saw her flash. What you couldn’t hear: she’d whispered #thismanisapervert into his ear. She didn’t even have to make eye contact.

“Do you want me to say something?” Vikas had brought a third drink and also a plate of carrot halva. He’d asked this question every time Sethi was at the same gathering, though tonight he’d waited until near the end to bring it up. “No. I don’t.” You were pleased enough with your ability to spend an entire evening not even crossing paths with him. Like you’d figured out precisely the necessary reaction steps to build some complex molecule. Stored in your phone were your red, red lips. The inner square had had a hard time focusing on Meena and Sethi, so you’d turned it into a selfie.

“But out of curiosity, if tonight were the night, what would you say? What would you say right now?” Vikas thought for a few seconds. Before he could answer, you kissed him on the mouth. You counted to five, backwards and slowly, in your head. You were sure no one noticed. Vikas tasted a hint of juniper.

Madhur Anand’s debut collection of poems is A New Index for Predicting Catastrophes (McClelland & Stewart, 2015). Her poetry and prose has since appeared in the Walrus, the Rusty Toque, the New Quarterly, Joyland, the Puritan, and Brick magazine.