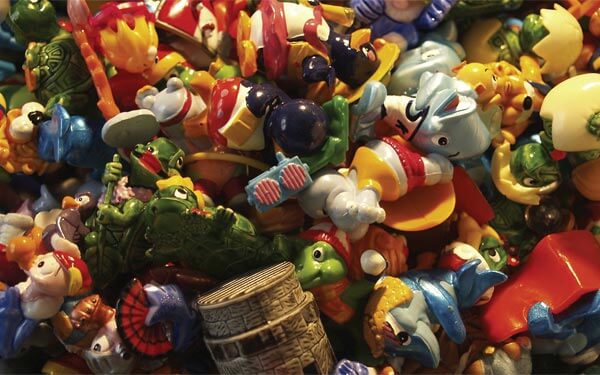 “Oh, for fuck’s sake!” Becca said. She showed them a female coyote-mechanic wearing overalls, holding a wrench. “I want something to put together!”

“Then you’d be whinging about the fragmentation of the female body in a patriarchal society.” Wes was a new friend of Becca’s from uni. Dave had liked him, at first.

“Listen, I accept fragmentation as a necessary part of the Kinder Surprise form, in order to fit into the little plastic shells and to comment on the disintegration of the self in post-modern societies. But I want something I can play with.”

Dave opened an egg on the tube and pieces scattered. He reddened but no one even looked up.

He was twenty-one that day, his first time away from home. All the Americans at the hostel stuck together. He avoided them. Waited to be found.

A Canadian at the hostel introduced Dave to Kinder Surprises. She seemed delighted to find out they didn’t sell them in the States. Her bulbous toes wriggled in their flip-flops when he asked where she got her rabbit toy. She had an enormous flag sewn on her backpack, to separate herself from him.

Unwrap the paper. Put the chocolate aside. Shake the inner egg, yellow and orange. Listen. Squeeze and twist to open. Snap the toy into place, without glue and without using the instructions. Play and smirk ironically, the way adults do since nothing is as much fun as it used to be.

Dave met Becca on the tube. Gave her a Kinder Egg, explaining that they were new to him and he’d developed a habit. She giggled. Inside was a green and orange fly that they put together without the instructions. Then they took it apart, returned it to the plastic shell, and hid it in a secret place for someone to find.

There is no Kinder Surprise to represent love triangles. Its pointy edges would be a choking hazard and we are led to believe that death isn’t fun.

Everything about Becca is like home now. Her soft skin, crazy hair. Her small hands touching someone else.

“I told you, I just don’t think people are made for monogamy.”

He keeps eating Kinder Eggs, crams them in his mouth one by one.

Grow up, Dave. Can’t we talk about this? Like adults?” “What’s that s’posed to mean?”

Becca still steals toys from him. They reappear in pockets, in drawers, in between her breasts for his hands to find. One dinner contains his favourite: a green seahorse playing polo with a crab on its shoulder. He hopes that this is her way of saying she loves him, this giving back what is his.

The first time they made love, he almost cried. To be with someone again. He clutched Becca’s neck, poured out into her. Said her name.

Becca noticed. “You big pudding,” she said. That accent. Those dimples. Dave laughed and laughed.

“I’ll stay if you stop seeing him.”

“I’m not going to stop seeing him, Dave.”

“I’d fall to pieces again without you.”

“But it was right here on the table!”

When was Wes there? Apparently Wes spent the night.

“I can’t believe you ate my Happy Hippo,” Dave says, and turns to go.

He wants to go home. Because he’s skint and looking for work is difficult. Because British girls get too drunk and make too much noise and are ugly and bad in bed. The only thing he’ll miss is the fucking Kinder Eggs.

They had celebrated after three months together. Becca gave Dave an egg. It contained a smiling cave-child on its mother’s back—the last figure he needed to complete the series. They walked along the river, holding hands. He had collected ten cavemen.

She takes him to Heathrow. He hugs her, feels the firm pressure of her body. Kisses her neck, the spot above her mole. This last time.

Becca gives him an egg. She smiles. Those dimples.

He stares out the window of the plane, watching London tilt away from him. He unwraps the chocolate and puts it aside.

He opens the inner egg. It contains a peacock. The tail is a 3-D puzzle. He is worried that the pieces won’t hold together without glue, but they do. It’s beautiful. Complete. Dave puts it on the plastic tray in front of him and swallows until his ears pop.