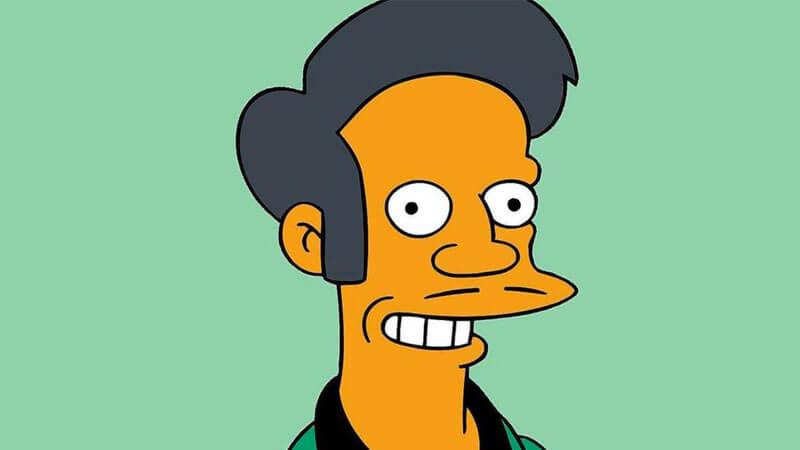 On April 8, The Simpsons aired the episode “No Good Read Goes Unpunished.” The 15th episode of the series’ 29th season addressed the issue of the racist portrayal of Kwik-E-Mart owner Apu Nahasapeemapetilon. “Addressed” insofar as Lisa Simpson looked at the camera and said, “Something that started decades ago, and was applauded and inoffensive, is now considered politically incorrect. What can you do?” She asks this question, a picture of Apu beside her, signed, “Don’t have a cow.” Apu is otherwise not in the episode.

In a 2015 interview, the voice actor who voices Apu, and dozens of other Simpsons characters,, Hank Azaria, described himself as an “equal-opportunity offender.” Footage of Azaria can be found where he says he was asked by show creators in the early days, “Can you do an Indian voice and how offensive can you make it?” In the same 2015 interview he acknowledges that Apu was, at a time, the only South Asian character in pop culture and that South Asian kids were being bullied because of the normalized racism of the character. In November 2017, comedian Hari Kondabolu released his film The Problem with Apu, about the character who Kondabolu describes as “a white guy doing an impression of a white guy making fun of my father.” With the issue becoming a mainstream focus, Azaria told TMZ a month after the film’s release that the folks behind The Simpsons would be thinking about it.

And so Lisa talks about how things applauded decades ago are now considered politically correct. In a Young Turks video titled, “Why Did The Simpsons Change Lisa Instead of Apu?” Nerd Alert host Kim Horcher wonders who exactly applauded Apu in the first place: “The all white writing staff? The white centric zeitgeist of the 1980s and ’90s?”

Comedy is a reflection of current culture and political climate. There is an argument to be made that comedians are today’s philosophers. It seems obvious that comedy spaces cannot be used effectively while being dominated by white men; plus it’s boring.

New spaces are being created where, as Horcher describes, “voices that were previously not heard because they were inconvenient to the prevailing culture are being heard now.” Not only are they being heard, audiences are vocal about their need for change.

The Toronto comedy show series SHADE is doing just that. SHADE is a self-described “monthly comedy show that represents and celebrates comedians of colour, comedians from the LGBTQ+ community, and comedians who identify as women.” Its audience is largely people of colour—people who have told SHADE founder and producer Anasimone George that they aren’t usually at these kinds events. “[People tell me], ‘I don’t usually come to comedy shows, I feel like I’m going to be unwelcome,” she says. Since its January 2017 debut, SHADE has sold out every show.

Comic D.J. Mausner lists SHADE in a compilation of “people of colour, female-identifying/non-binary, and queer centric shows around Toronto.” This compilation is what White Guys Matter host Aaron Berg would call “opportunities to marginalized people,” not an opportunity to make people laugh. White Guys Matter is just one example of how not everyone is happy that white men’s voices aren’t the only ones being heard. The show, created by comedian Kevin Brennan, has been a regular show in New York and made its Toronto debut on April 11. It promises to “Make comedy great again” and prides itself on not being a safe space—while being hosted at local club Yuk Yuks, which has a strict no-heckling policy. At the beginning of the show, Sarah McLachlan played; even the feminist references being mocked are dated in the ’90s.

“They think it is this open idea to also include these hateful ideas,” says Alicia Douglas, a comedian who has performed with Second City Toronto Touring Company and Second City Theatricals. “But that’s not an open mind. Those hateful ideas are shutting other ideas out.” Douglas understands that comedy is competitive and comedians may think they need an edge of some sort. But she suggests that if someone needs to prove themselves, why not have more people in the room to prove themselves to? There is this idea, she says, that white men are being pushed out, when in reality, other people are being welcomed in.

When it comes to White Guys Matter, Douglas says, “people are trying to say it’s just a show or it’s just a name; no, that name carries too much weight. As comedians we should understand better than anyone how much our words and the context of those words matter. We should understand as comedians out words have power. A lot of those guys have been doing comedy for a really long time; and because of that they have this idea that, ‘well, we understand this better than you guys since we’ve been doing it for a long time.’ But the scene is really changing, and the atmosphere is really changing. I honestly think it is out of fear that this kind of thing happens.”

Comedy, commentary on life, is not doing its job if it is exclusively commenting on the lives of the same demographic—cisgender, straight, white men. In my own life there has been an obvious need for more from the comedy I grew up consuming. It started when watching Comedians in Cars Getting Coffee, a show where Jerry Seinfeld spends way too much time talking about how rich he is and how awful millennials are because they work in coffee shops (instead of in expensive offices) and record themselves; meanwhile, Seinfeld records himself getting coffee with friends, and guest Norm Macdonald compares women on phones to yappy dogs. These were two guys that I, a teenager living in the suburbs using dial-up internet, thought were hilarious. And boy did I love The Simpsons.

On April 25, The Late Show With Stephen Colbert uploaded on YouTube Colbert’s interview with Azaria, titled, “Hank Azaria: ‘The Right Thing To Do’ With Apu.” In this interview Azaria goes back on earlier comments, saying he didn’t realize how harmful the character of Apu is. “I wanted to spread laughter and joy with this character,” he says. “And the idea that it’s brought pain and suffering in any way, that it’s used to marginalize people, it’s upsetting, genuinely.” He continues to say he was unhappy with the April 8 episode and suggests the show includes Indian and South Asian writers, and not in a tokenized way.

Times have changed, the culture is changing, comedy needs to reflect this.