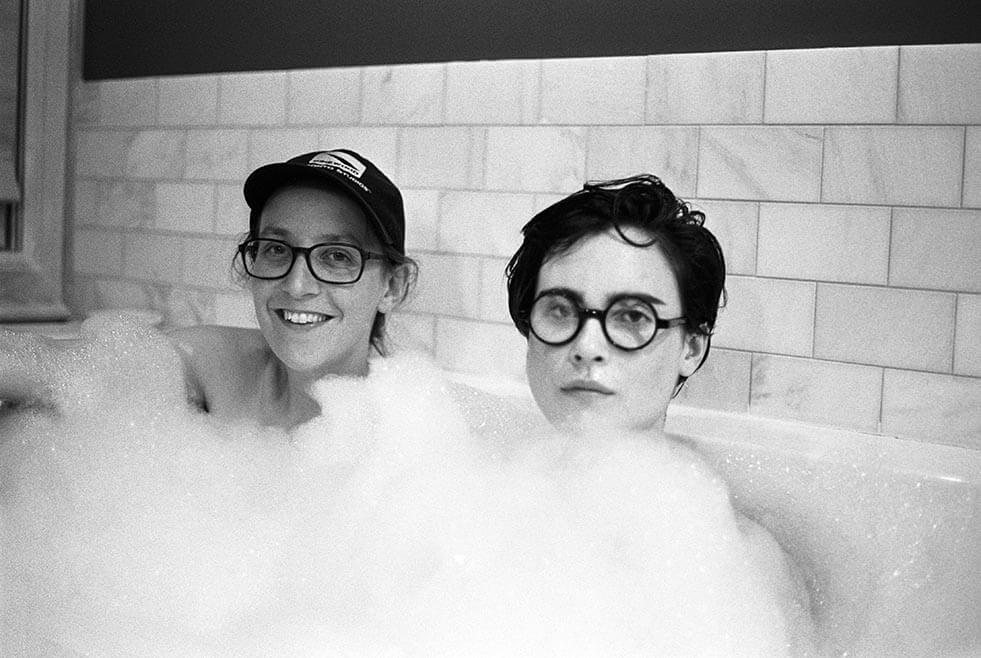 Although labelling a band “lesbian garage rock” may sound reductive or even backhanded, in the case of Sackville, N.B.-based Partner, it’s welcomed. “Most songs are straight, but our songs aren’t straight, because we’re not,” says the band’s guitarist- vocalist Lucy Niles. “We’re just plain old fashioned dykes, really.”

These kinds of matter-of-fact declarations are scattered in conversation with Niles and co-frontperson Josée Caron, who despite being in two totally di erent parts of the country at the time of interview, insist on doing it together. Within moments it’s clear why: they are two parts of the same whole. They take turns telling jokes, gushing over their favourite music, and generally embracing their quirkiness.

When their second single “The ‘Ellen’ Page” went viral in 2015, Partner was quickly snatched up by Canadian indie label You’ve Changed Records. Earlier this year, they released the first single off their debut LP, Comfort Zone, ostensibly about “whatever it is that makes you feel at ease.”

Niles and Caron met in 2010 at Mount Allison University in Sackville, where they instantly bonded over reality television and guitar rock, the latter inspiring them to start a band. The results of their early recordings were casual and playful in tone and performance. “[Those recordings] were pretty lo-fi, pretty fun, pretty laid back,” says Caron. “We recorded all of the older stuff over the course of a week.”

In a landscape that often trivializes artists for their most easily discernible characteristics, Partner finds strength and sustainability in keeping things real. “I don’t think we’re necessarily going to be subsumed into a trend wave because we express our sexuality in a very not cool way,” says Niles “We’re not like, dignified about it. People tend to be to be very dignified these days when they talk about their sexuality, and we’re not.”

What is dignified is their musicianship, their charm, and their work ethic.

Caron has been known to wield a double-necked Gibson SG at shows for her Thin Lizzy-esque solos and the two hopscotch between syrupy harmonies and glassy-eyed musings on songs like “Hot Knives” and “Everybody Knows You’re High.” Before they even put out an album, they released four music videos.

Though the band’s set to play major cities in North America this summer, they have a proclivity for small-town shows. “You never really got ‘good stuff’ coming to your town as a kid so that feeling [playing smaller cities] is so pure and so special,” says Caron, a native of Summerside, P.E.I.

“You just get a better welcome, and nothing against big cities, but there’s so many things you can do,” says Niles. “And in a small town there’s only one thing you can do, which, when we’re there, is to go see us.”