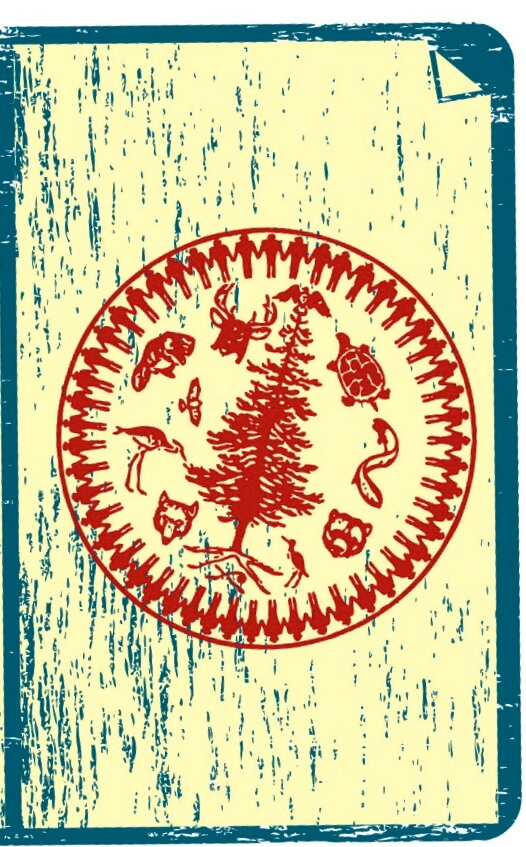 Harry Doxtator can remember attending the ceremony as a toddler, and now sits on the Border Crossing Committee as the Oneida representative. “We are establishing our right of having the ability to cross the border that they have designed. We are saying that we have the right to freely travel, as we call it, Turtle Island.”

Since the 1783 Treaty of Paris established the boundary between Canada and the United States, the Haudenosaunee have become a people divided. The borders of Canada, the United States, Ontario, Quebec, and New York demarcate their lands.

Since 1928, the crossing celebration acts as an affirmation of the rights laid out in Article III of the 1794 Jay Treaty. Signed by Britain and the United States, this article purports that the First Nations people dwelling on either side of the border can cross to and from and freely carry on commerce.

The Haudenosaunee Confederacy says that they have neither been defeated by, nor accepted citizenship from, Canada or the United States and thus remain sovereign. Respect for the nation is expressed as early as 1613 in the Two Row Wampum Treaty. “As allies, the Haudenosaunee people were promised that their freedom and independence would always be recognized,” explains Grand Chief Mike Mitchell of Akwesasne, a Mohawk reserve that straddles both international and provincial borders. “From the imposition of the Indian Act, of residential schools, to brainwashing to make us forget who we are, the end product is still that, we are citizens of our own nation.” They have also held their own passports since the 1920s, and ID cards since the 1950s.

All members of the Six Nations—Oneida, Seneca, Mohawk, Tuscarora, Cayuga, and Onondaga—can hold a Haudenosaunee ID card and passport. The ID card is used is at the Canada-US border, and passport-holders have successfully used them to travel around the world. But heightened border security since 9/11 has caused escalating conflicts over the legitimacy of the Haudenosaunee passport.

Through the Western Hemisphere Travel Initiative (WHTI), the United States released a restricted list of documents acceptable for entering the United States. The Haudenosaunee responded by creating a documentation committee in order to bring both pieces of identification up to date, both in terms of security and political acceptability. “We are in negotiations with the United States about having it accepted as compliant with WHTI,” says committee member, lawyer, and professor Paul Williams. “We’re also in negotiations with Canada, whose law at this point doesn’t have a list of acceptable documents.” Canada’s regulation only states that the documents should be satisfactory to the officer at the border crossing. “It gives the officer a bundle of discretion,” says Williams.

The latest upset was in June 2011 at the Cornwall border, which divides the Mohawk Nation in half, when Joyce King produced her Haudenosaunee passport as identification to enter into Canada. The Border Services Officer seized the document, deeming it unsanctioned.

Problems persist more on the Canadian side of the border than the American one. This is because, unlike the U.S., Canada never incorporated Jay Treaty’s article III into law. The Treaty of Ghent, which provides the restoration of the rights of First Nations as they existed prior to the War of 1812, has only been enacted in the U.S. The Crown promised to do the same—but never has.

“There are 28 articles in the Jay Treaty,” says Grand Chief Mitchell. “Canada has ratified and sanctioned 27 of them.”

The federal government believes there isn’t a reason to keep this promise, claiming that circumstances have changed. But Williams relays the stories of over 200 families that are broken apart by their inability to leave Canada, such as a woman from Tuscarora who, married to a Cayuga man at Six Nations, cannot return to the United States to visit her father who is dying of cancer. Forced to stay in Canada in fear that they won’t be permitted re-entry, it is clear that there are plenty of reasons for the Haudenosaunee to continue protesting for their rights to cross a border that their community precedes by hundreds of years.