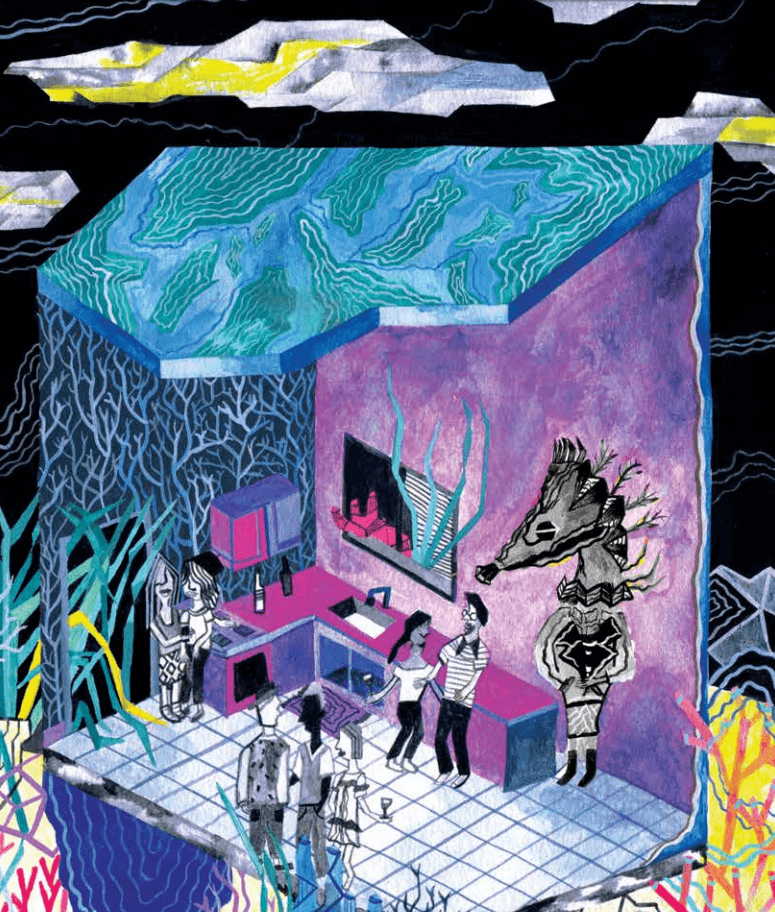 In the kitchen everyone is talking about Kendrick Lamar. Health Goths. Social workers. Lovers being just a little bit mean to each other.

But who am I to judge? I who watch nature documentaries in the bath.

The bride-to-be stretches her toes on the sofa. I sit beside her and look at photographs of dark-haired children. She tells me their names, arranged in variations of a’s and r’s and u’s. I stare at her lovely pink feet.

It was good of you to come, she says. And I wonder why she says this. And then I realize that I am the only guest who has arrived alone.

I used to believe parties were whirlpools where one wore necklaces and silk sleeves and danced around a white piano and the dance floor would be lined with men, strangers and old acquaintances, each with a delicate face and a secret.

Now days it’s rare to find a white piano, says the bride. Or maybe she says, now days, there are no secrets. Or maybe what she says is, this is all that’s left.

The guests stack their shoes in the hallway. They hang their coats over the banisters. They comment on the temperature and the different routes they have taken through the city to get here, to this hallway, to this room where they now stand, shoeless, drinks in hand.

It took one couple 47 minutes to drive. Another 32 minutes, but they took the bus. One couple spent 55 minutes on the highway. They win.

The man who has made the longest commute explains that with the collective amount of time the average American spends sitting in cars or waiting for buses in a year we could build the Great Pyramid of Giza 26 times.

Why would you want to do that, says his girlfriend.

I’d rather wait for the bus, she says.

You know, someone else observes, they used slaves to build the pyramids.

And someone else says, I wonder how long it took the slaves to commute.

In the living room a woman draws a pyramid in the air.

Love, Work, Sleep, she laughs and I realize she is not drawing a pyramid but a Venn diagram. She is explaining to another woman how she has successfully divided up her life.

The groom is drunk and charming and half asleep. He hugs me for the first time in 10 years and I remember that I once found him attractive. And also that I might have once, 10 years ago, called him in the middle of the night and invited him to eat soba noodles.

He declined the invitation.

All the men in the kitchen have started to carry around these little mushroom coloured satchels under their shirts. Even the thin men. They donate to good causes. Hurricane relief. Plan parenthood. They offer me directions to the bathroom.

I hear horses galloping across a field. Their hooves like water, moving easily over the grass.

I momentarily find myself alone in a dark room. An office with bookcases and computers and a well cared for bonsai tree. One shelf is dedicated entirely to Fredric Jameson. One shelf is lined with miniature gold cats.

The bride-to-be leads me through rooms and asks me what I think of the oak dresser or the daybed with its hemp throw. Or the bread island. Should it be kept or  returned? Everything can be returned in 30 days with a valid receipt.

Horizontal raindrops push their globular shadows across the window.

I admire the effort of pushing a shadow; it’s easier to drag one.

People stand in the kitchen with their phones in their pockets. Apart from our age and the fact that we are alive we have nothing in common.

I’m the only one not wearing black jeans. I don’t have a phone in my pocket. It lies on the table like a hand mirror. Every time I look at it I want to pick it up and look at my face.

Phones are the reason men don’t want to have sex anymore.

I find myself offering the room facts about Chernobyl. This turns out to be  unpopular.

In Chernobyl mushrooms grow to the size of human heads.

In Chernobyl animals flourish, despite poisoned forests and poisoned rain and poisoned earth. Due to the absence of humans, they flourish.

In Chernobyl life expectancy is shortened by 27 years.

Everyone in the kitchen is competing for the seat of the Best Tragic Poet.

I used to be in a screamo band. I was the lead screamo.

I used to paint landscapes.

I used to paint landscapes with horses, believing horses to be the most godlike of all creatures. The only animal that needed no improvement. Seahorses too.

The bride-to-be has disappeared. She returns an hour later, barefoot, with pizza stains on her mouth and hair curling from the rain.

When I look at the bride’s face I think: Venn diagram.

When I look at the groom I think: soba noodles.

Outside I share cigarettes with someone I knew as a child. Well, not quite as a child. He arrives at midnight and hugs me several times. When we were 14 he had an hourglass figure.

We talk about poetry. Global warming. A woman he has recently left. We don’t talk about the town we grew up in or the fact that we only ever got chorus roles in summer theatre productions.

I ask him to describe the woman he has left. He always dates beautiful women but he is not good at describing them.

He says she is tall and slender and I imagine a cedar tree.

A cedar on the west coast with golden leaves.

We are still young, but no longer very young. We are nearly young.

Our faces float together in the streetlight. We have 40 years. We have 50 years to spend.

What is childhood? What is time?

Lying in a bath until it gets cold.

A mysterious cat approaches. We stand unjacketed in the cold spring night.

The cat wheels around into the vanished world of gloves and windowsills and dark gardens.

Love is another way of wasting time.

I hug people I don’t know. The hug means that now our bodies know each other a little better. Our bodies now feel more comfortable in the room together.

I avoid hugging men with girlfriends or watches. I avoid touching anything that doesn’t belong to me.

My childhood friend worked a double shift. Remember when we found restaurant work glamorous, he says. Yes, I can actually remember that. All the jobs I didn’t get because I was clumsy or too young or not pretty enough. He tells me that his feet smell and he’s afraid to take off his shoes but he’s also afraid to not take off his shoes, to be the only one at the engagement party wearing shoes.

Do they smell, he asks me.

They do but I don’t tell him this. Instead I touch his hand and his face relaxes. I have a distinct memory of walking along a beach with him. We are both wearing togas after a production of The Frogs.

I wonder if he is perhaps just a little bit of an alcoholic.

We talk about whether or not we believe in a round earth.

I don’t even know anymore to be perfectly honest.

I agree with him, there is very little evidence to suggest that the earth is anything other than flat.

We have lived in the same cities at different times. I watch him closely for signs of weakness and then compare his vulnerability with my own. We match up perfectly:

On the shore of the flat earth.

In the exact spot where the ocean liner sinks.

In the conversation between the slippers and a glass of milk.

On the bread island.

At the foot of a miniature iceberg.

In the unthinkable nuclear paradise.

In the folds of a discarded toga on a beach.

In the journey of the seahorse across the ocean, the slowest moving fish, swimming upright in the curious sea grass, a tiny gold blade.

Kasia Juno van Schaik received the Quebec Writers’ Federation Short Story Prize in 2009 and was a finalist for the CBC short story prize in 2017. Her writing has appeared in the Los Angeles Review of Books, The Best Canadian Poetry (2015), the Rumpus, and more. Find her at @kasiajuno