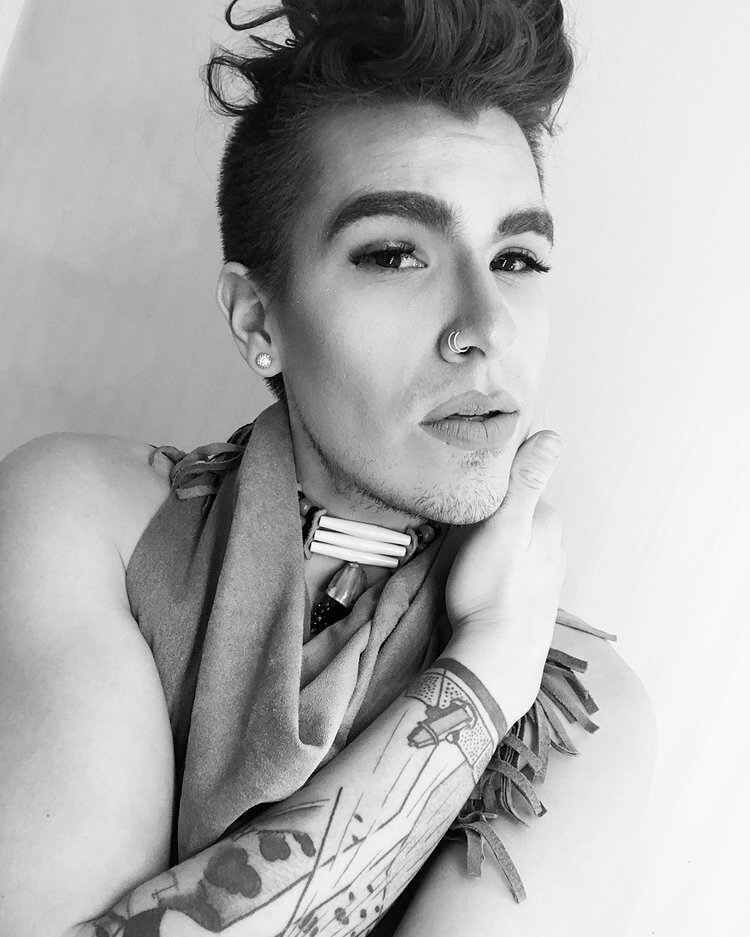 Joshua Whitehead has a lot to say. The 29- year-old Oji-cree, Two-Spirit otâcimow, or storyteller, often finds himself fuelled by anger: from the day-to-day frustrations to systemic-sized injustices, and Canada’s political climate and the ongoing colonization of Indigenous peoples in Canada. His collection of poetry, full metal indigiqueer, came from this fire, this feeling “of wanting to destroy shit. To destroy the canons that I was forced to read for two and a half degrees.”

Whitehead started publishing poems while working on a degree in English and a minor in Creative Writing at the University of Winnipeg. Then, inspired by Nisga’a poet writer Jordan Abel’s “weird but amazing Indigenous experimental poetry,” Whitehead realized he could write an anthology of his own. He wanted to tell the underrepresented story of Indigenous people who are Two-Spirit and queer, or, as Whitehead calls it, “Indigiqueer.”

Whitehead realized that many of his poems already had a narrative arc that connected them. He also discovered that a protagonist was already woven through the works: an “epic poetic hero(ine),” an “Indigiqueer trickster,” or, as Whitehead fondly refers to them: “Zoa.”

The result is an epic odyssey that he likens to Beowulf. But Whitehead’s version of an epic is a “super queer organism,” one that is wild, feral, vibrant, sex-positive, beautiful, and also dirty at times, he says. For Whitehead, it was important that he created something that placed Indigiqueer people in the contemporary world. He does this “to remove us from the was, to remove us from this romanticized anthropological notion and place us into the now—into the future.”

According to Whitehead, some people call full metal indigiqueer poetry, some say it reads too much like prose, others call it experimental. For him, being an otâcimow encompasses all of the above. It’s why Whitehead also began working on Jonny Appleseed, his debut novel, which is to be released this April.

His work is an extension of his own body. He’s even tempted to call his poems “biostories.” “They’re not memoir, they’re not nonfiction, they’re not quite fiction,” he says. “Perhaps it’s just because as an Indigenous queer person I don’t have access to write as a disembodied person. I’m tied to my body. The world tells me so every chance it can get. You’re brown, you’re Indigenous, you’re queer, you’re too femme.” Whitehead points out how many writers can shed themselves in their writing, to write only for the sake of story. “Literature, the act of speaking, the act of writing, is a wholly political act,” he says—and he can’t remove the body from that.

But these days, Whitehead also finds himself writing from hope, he says. This was the case with Jonny Appleseed, which came from him focusing his energy on his communities and the love that he wants to give back. He cites an “Indigenous renaissance” of literatures being rewarded, something that only furthers his hope. “I’ve nurtured anger into a state of excitement and love for the Indigeneity and Indigenous literatures that will come beside it.”

If you enjoyed this article, please consider supporting This and help us continue producing our award-winning journalism. Subscribe to the magazine or donate today!