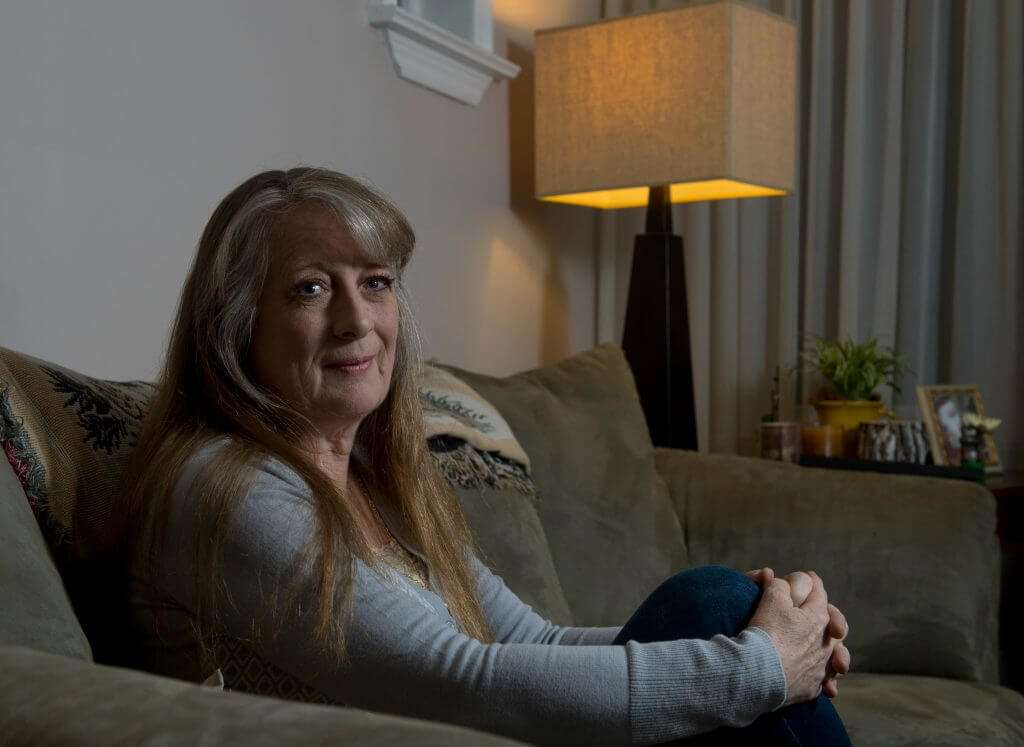 Photo material republished with the express permission of: National Post, a division of Postmedia Network Inc.

One Friday in late January, a photo on Facebook had Debra Selkirk in tears. Weeks earlier, she’d received a desperate email from a woman in the U.S. The woman’s 30-year-old sister needed a new liver, but she had to be alcohol-free for six months before she could get a transplant. The question was: Did she have time to wait? Selkirk quickly sent over a list of American transplant centres and a doctor who would waive the waiting period. Now, as Selkirk scrolled through her feed, she spotted a picture of the two sisters together—post-transplant. “I helped with that,” she sighs.

Selkirk’s name made headlines a few years ago when she fought that very six-month policy in Canada. Her husband, Mark Selkirk, died in 2010 just two weeks after he was told he wasn’t eligible for a transplant—he’d only been alcohol-free for six weeks.

While there are U.S. transplant centres who don’t follow the policy, it’s much more consistent in Ontario, where Mark was being treated, and across Canada. Proponents argue that those who haven’t been alcohol-free long enough are likely to relapse after surgery, or that patients are likely to get better over the six-month abstinence period (and possibly avoid the need for a transplant). But Selkirk says it’s discriminatory and misguided. She often cites medical research, such as a University of Pittsburgh study that found that only six percent of liver transplant patients who once misused alcohol relapsed each year, and only two-and-a-half percent returned to heavy drinking. That, and other studies, conclude abstaining from alcohol has only a moderate impact on transplant success. In 2015, Selkirk filed a constitutional challenge to change the rule in Ontario.

Last September, after more than two years in court, the Trillium Gift of Life Network, the agency that runs the province’s transplant network, agreed to launch a three-year pilot that would eventually waive the requirement for all patients. While the policy remains unchanged for now, the agency will watch participants’ progress and determine whether to alter the criteria. Selkirk believes the pilot will succeed, and hopes the outcomes will convince other provinces to change their policies. The program begins in August, but other cases have already popped up in the news. Last fall, Cary Gallant was scheduled to ask a judge for an injunction to force authorities to put him on Ontario’s transplant list. And in December, Indigenous rights activist Delilah Saunders’s story spread after she, too, was denied a transplant.

Selkirk has been watching these stories, and offering support where she can. As her court case wrapped up, she realized she wanted more than a legal battle that would end. Patients still need so much support, she says. “I just started to have a million ideas, like I should do this, and someone should be doing that.” And so, in October, she began narrowing down the mandate for the Selkirk Liver Society.

She wants to encourage a holistic approach to treatment where patients manage their disease with the help of not just a liver specialist, but a nutritionist and other health professionals that they can periodically visit all in one day. She also wants to reshape public perception starting with the media, and she’s asked the Canadian Press to finalize their decision to replace words like “drunk” and “alcoholic” with “person with an alcohol use disorder” in their style guide. And, long term, she wants to support people through the process of transplantation by making things like accommodation easier. Paying to stay in Toronto for six weeks during the surgery and recovery process, for example, can be an extra burden on families—especially when a spouse or partner has to be away from work for so long. She hopes to set up more affordable short-term housing where families can stay.

There’s a lot to be done, but Selkirk says she’s found her calling. “I’ve never loved what I do,” she says. “I just always wanted to go home to Mark.” These days, Selkirk occasionally gets a message from another stranger watching a family member suffer, and she’ll channel her passion into that. Soon, she says, they’re texting like they’re best friends