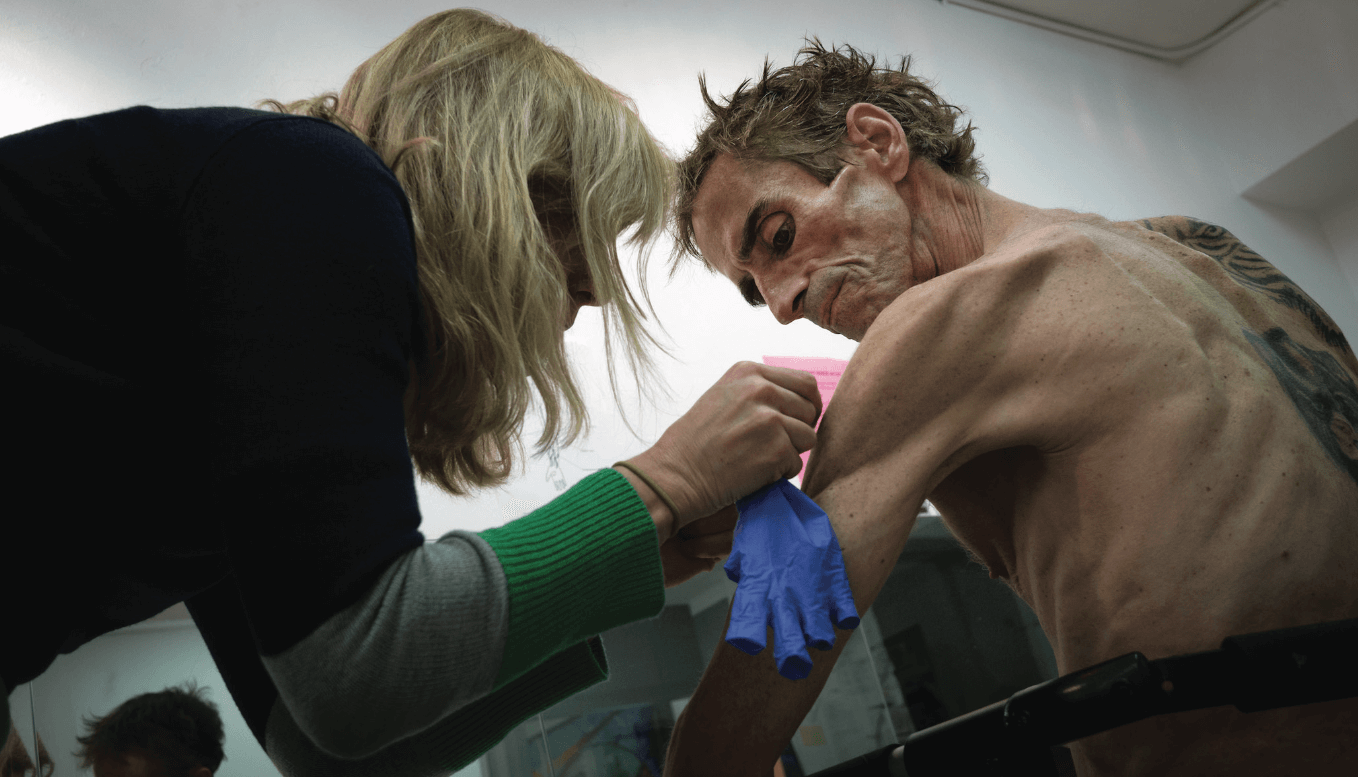 In Aaron Goodman’s The Outcasts Project, the photojournalist captures opioid users from Vancouver’s Downtown Eastside in their day-to-day lives as they participate in the North America’s first heroin-assisted treatment program. Above, subject Johnny is photographed as a nurse aids in self-injection at Vancouver’s Crosstown Clinic. “The reason why I do the dope is different from why a lot of other people do it,” he says. “They do it to get high, I do it to help with some pain issues I have. I don’t want people thinking, ‘You know, these guys are going in there taking our tax dollars and doing heroin and getting high, look at them. You know, they’re nothing but detriments to society.’ Well, I’ll tell ya, it’s saving my life.”

Pacing frantically around her living room, Audrey yelled at herself in frustration: “Just put down the fucking phone!” It was mid-February and, having been sober since New Year’s Day, Audrey, 35, whose name has been changed to protect her privacy, decided to see a show with friends at Toronto’s Danforth Music Hall. After getting ready with the band’s album playing and “just one” drink in hand, she became consumed by an inner battle between the urge to dial her dealer for the drugs she usually took when going out with friends, and her long-term desire to kick the habit.

Audrey had been a heavy drinker since her early 20s. Over the past decade, she developed a compulsive drive toward cocaine, even knowing that it can sometimes be laced with fentanyl. “It scared me at first,” she says, “but I just don’t read those headlines anymore.”

Audrey was the lead programmer at a Toronto tech firm, yet her personal life was unravelling. Her husband wanted children on the condition that she stop taking drugs for at least a year, but she had struggled to pass a month. Some days, Audrey found herself sniffing cocaine before breakfast.

That night in Toronto she cracked and called her dealer, instantly easing her anxiety. But feelings of guilt and defeat returned the next day. “I was so mad at myself. I’d been sober for over a month,” she says. “It’s like another person takes over.”

Like millions of other Canadians, Audrey has an addiction. By definition, addiction is when we compulsively engage in rewarding acts, even when we understand the adverse consequences. One can become addicted to many things: alcohol, cigarettes, gambling, sexual activity, shopping, junk food, even work. In non-compulsive amounts, some of these can be good for you. It’s only when they’re incessantly sought out, despite knowing the negative repercussions, that use becomes addiction.

The current answer to addiction is based on outdated assumptions and disproven theories. If we believe that narcotics on their own cause addiction then it makes sense to criminalize drugs; but a four-decade-long War on Drugs has done little to curb the problem. More people have been jailed for possession and profiteering than ever before, though addiction is rising in lockstep with an epidemic of overdose deaths.

If we believe that genetics alone causes addiction, then it makes sense to prescribe the disease away with pharmaceutical responses. But no specific gene can be pointed to as the cause of addiction, and no pill can cure it. Current medical and public policy approaches largely believe addiction is a problem to prescribe or jail away. Yet the roots of why people become addicted must be tackled to find lasting solutions.

Dr. Gabor Maté, a Vancouver physician and renowned addictions author, has long advocated for deeper comprehension. “If we’re going to understand addiction,” he says, “we first have to understand what it is that the person gets out of it.”

Addictive acts and substances activate neurochemicals known as endorphins, our brain’s natural opiates. By acting on the brain’s reward centres, opiates—both natural and synthetic—calm the body and mind. After consistent repetition of the behaviour, stimuli such as smells, sights, and sounds associated with the endorphin-releasing act trigger dopamine in the brain.

Dopamine is a neurotransmitter responsible for increasing energy, heightening drive, and narrowing focus. For Audrey, stimuli that typically preceded taking drugs—drinking and listening to music before a concert—triggered dopamine that focused her drive to obtain cocaine.

“If I were to start using heroin, the first time I did it…I wouldn’t get high until the heroin hit my brain,” says Dr. Alexander Goumeniouk, emeritus pharmacology professor at the University of British Columbia. “But the fiftieth time, I’d be high before the heroin even got in my arm.” Repetition facilitates the release of these compounds, Goumeniouk says. “There definitely is a behavioural component to addiction.”

Maté often tells audiences on his speaking tours that the real question is not “why the addiction” but “why the pain.” If we’ve experienced stressful life events, we are more likely to reach for substances that release feel-good endorphins. “The first time I did heroin,” a sex worker told Maté, “it felt like a warm, soft hug.”

An overreactive nervous system and its need for soothing both stem from trauma. During childhood, abuse and neglect affect the brain and nervous system’s development, amplifying stress responses in adulthood.

When asked about her upbringing, Audrey disclosed she had been neglected as a child. Her father left when she was very young. “The new man my mom married was verbally abusive; a pretty angry guy,” she says. This abuse frayed her nervous system. “I think that’s why I can’t connect with others without being high.”

While data suggests that 80 percent of those in rehab centres have some trauma, childhood or otherwise, Goumeniouk’s experience puts that figure at 100 percent. Despite his own field trying to solve addiction with pharmaceuticals, he’s quick to note the effects of trauma on addiction, calling it an “underappreciated component of addiction-ology.”

In addition to childhood trauma, isolation is another crucial factor in determining the chances of addiction. Social and economic exclusion leaves the brain in the absence of environmental conditions required for healthy neurochemical activity.

Maia Szalavitz, a neuroscience author and reporter for the New York Times, often writes about the importance of connection for brain health. “You could define addiction as falling in love with a drug rather than a person. The same kinds of brain systems and chemicals are involved,” she says. The underlying message, Szalavitz notes, is that if people are alienated, traumatized, and desperate for a solution, simply taking away a drug doesn’t solve the problem.

But the way we’ve set up society works against “making warm and reliable connections,” she says, which are crucial for relieving stress. “When you have inequality, you have competition,” neither of which are useful in helping people get the social support they need.

“There’s a very universal human desire to be included, to be social,” says Chris Arnade, addiction and poverty journalist with the Guardian. Drugs perform many tasks, he says; beyond numbing pain, they provide someone with a social network. “It may not be the social network that you or I may approve of, but on the streets, they have family, often for the first time.”

If addictive substances soothe us, calming troubles stemming from childhood trauma or social isolation, then society must tackle addiction at those roots. To create more affection and inclusivity, we need a deeper awareness of the lasting effects of childhood abuse and the isolating effects of stigma and disenfranchisement left over from the drug war.

With so many advocating for an addiction approach focused on mental and physical health, rather than a punitive or strictly pharmaceutical response, it’s time we accept the research and activism that prove we must tackle addiction at its roots.

UPDATE (02/14/2018): Some of the language in this story has been updated to better reflect vocabulary standardly used around addictions.

Tracy Giesz-Ramsay is a journalist currently focusing on the neuroscience of addiction and mental health. She is also the host of a conversation and portrait series called Capture Queue.