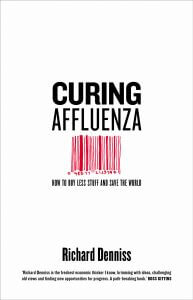 “You can mine for gold, but you can sell pickaxes.”
-Anonymous

One of the biggest fortunes made in the Californian gold rush of the nineteenth century was that of Levi Strauss, who made his money selling everything from tents and buckets to the denim pants that still bear his name. He got paid whether his customers found gold or not. All retailers make money whether we find happiness in the products they sell us or not. Indeed, the longer people search for gold, or happiness, the more pants and other stuff Mr. Strauss and other retailers can sell them.

Affluenza has fuelled a massively inefficient search for happiness. Rather than dig through the earth in search of gold, or dig through Keynes’ rubbish dump looking for bottles of money, modern capitalism relies on billions of people searching for new products that will fill the hole in their lives that was briefly plugged by the last purchase. The banks, the manufacturers, the advertisers and the retailers all make their fortune by selling us the dream that ‘there’s happiness in them there hills’. Of course, the last thing retailers want is for us actually to find it.

As we have seen, poorly understood economic indicators such as GDP help to ensure the global debate about building strong economies focuses on the flawed idea that the amount of economic activity is in some way a proxy for the rate of economic or social progress. In fact, the empirical link between growth in the size of an economy and human happiness is very weak – some would say non-existent. This should come as no surprise. Consider the following:

So why are politicians and business leaders impressed when told that GDP has grown because of a spike in the consumption of imported appliances and bottled water (otherwise known as ‘strong retail sales figures’)?

The answer is both simple and cynical. Wasting natural resources to produce stuff that will soon be thrown away doesn’t generate true national wealth, but it does generate enormous wealth for some people in the supply chain. That’s all it does, and that wealth creation is naturally very, very important to those people. But to suggest that borrowing money from overseas to buy things that were made overseas – things that are quickly thrown out and buried in local landfill – plays an important role in making a national economy strong is simply absurd.

It is hard to believe that all the rowing machines that accumulate in the spare rooms of the nation might be seen as an indicator of wealth or progress. But, as enormous amounts of energy, natural resources and human labour are wasted on making products that are never used, or that are designed to fall apart, what have the economists and politicians had to say about this consumerism-induced waste? Almost nothing, except for implicit praise. Indeed, rather than highlight the economic and environmental harm of such waste, an enormous number of economists and politicians have spent decades trying to shift the rules of global trade, and the norms of ‘sensible economic policy’, to generate more such waste.

The term ‘Washington Consensus’ has often been used to summarise the fundamental tenets of the neoliberal agenda at the global level. According to its adherents, who have shrunk in visibility if not number since Donald Trump was elected and the UK supported Brexit, the way to increase the efficiency of an economy is:

While there is no doubt that there are times when lowering trade barriers can lead to an increase in the quality of life of some people in some countries, there is also no doubt that far more effort has been expended by groups such as the World Bank and the International Monetary Fund on trying to reduce trade barriers than on trying to reduce water pollution and income inequality – which have also been shown to improve economic performance and human wellbeing.

Once we draw a distinction between whether an activity will create wealth for a producer and whether it will create wellbeing for a community, it becomes much easier to decode the flood of econobabble used to justify the obsession among advocates of the Washington Consensus for lower taxes and less regulation rather than for reduced tax evasion and more environmental regulation. While it is possible for the owners of multinational companies to profit from poor labour and environmental standards in low-income countries that export stuff to rich countries, it is far harder for rich people in rich countries to benefit from an improvement in the standard of living of workers in those developing countries.

A cynical answer to that question is that most economists operate on the assumption that the customer is always right. So when the IMF and the World Bank offer to pay economists to explain the benefits of using borrowed money to buy new stuff, most of them are happy to take the money. On the other hand, many economists have highlighted the problems with placing the pursuit of GDP ahead of the pursuit of community wellbeing, but such economists are far less likely to be asked to give keynote addresses at the most ‘prestigious’ events. Culture shapes not just economics, but the economists anointed to explain economics to the populace.

Similarly, if a tax was imposed on the sugary drinks that cause so much ill health, and the tax revenue used to fund a labour-intensive program such as active playgroups for kids, supporters of small government would likely scream about the inefficiency of a program that improved health and created jobs at no net cost to the budget.

It’s not the size of government that is a key concern for many conservatives, but the size of the private sector’s profit margin. When we spend $100 on pie makers and table-top electric wine chillers, the majority of the money goes as profit to the owners of the various parts of the supply chain, but when we spend $100 on a publicly funded teacher, nurse or aged-care worker, there is little or no profit margin to be sliced off. That’s why the proponents of small government who rage against excessive spending on public health care usually don’t mind huge public expenditure on aircraft carriers and fighter jets. They know the military hardware will be built by the private sector and that the manufacturers, like Levi Strauss, will make their profits whether or not the ships, jets and weapons are ever used. The shape of our economy doesn’t just determine how much harm is done to the environment, it helps determine how much profit will be collected by the owners of the supply chain. One thing that manufacturers, retailers, advertisers and transport companies can agree on is that none of them make a buck out of higher taxes being used to fund better quality high schools.

While choosing which activities do most to improve community wellbeing will always be controversial, identifying the economic consequences of such choices is quite straightforward. For example, if consumers shifted away from buying lots of stuff towards buying lots of services, it would have a huge impact on the shape of the economy but almost no impact on its size. And if citizens switched their spending away from stuff they didn’t need and towards services that governments provide efficiently – health care, education, public transport, bigger parks and more museums – there would be no reduction in the size of GDP, but there would be a significant reduction in the amount of profit earned in the economy (the profit margin on $1000 worth of publicly provided childcare is a lot smaller than the profit margin on $1000 worth of branded merchandise . . . but there are more jobs created per dollar spent on childcare than for each dollar spent on handbags and sunglasses).

A shift away from privately provided stuff towards publicly provided services would also lead to much lower consumption of natural resources. Yet as long as people get the same or more satisfaction from high-quality public services as they do from foot spas they don’t use and food they throw away, this shift would have no adverse impact on the happiness of citizens. Indeed, people would likely be happier.

Excerpted from Curing Affluenza: How to Buy Less Stuff and Save the World by Richard Denniss. Published by Between the Lines ISBN #9781771133678. Purchase the book online today.