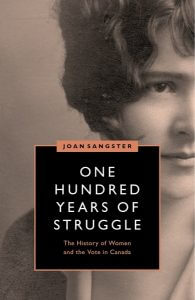 One Hundred Years of Struggle: The History of Women and the Vote in Canada
By Joan Sangster
UBC Press, $27.95

In One Hundred Years of Struggle: The History of Women and the Vote in Canada, Joan Sangster recounts the complex history of Canadian women’s enfranchisement during the 19th and 20th centuries. Sangster delves into the multiple and diverging political perspectives of the movement’s key players and illustrates the flaws in our normative conceptions of the chronology of Canadian suffrage. In particular, Sangster’s honest analysis of the role that imperial and racist attitudes played (and continue to play) in the fight for women’s equal political participation offers a challenge to those who believe that struggles associated with women’s suffrage are entirely historical.