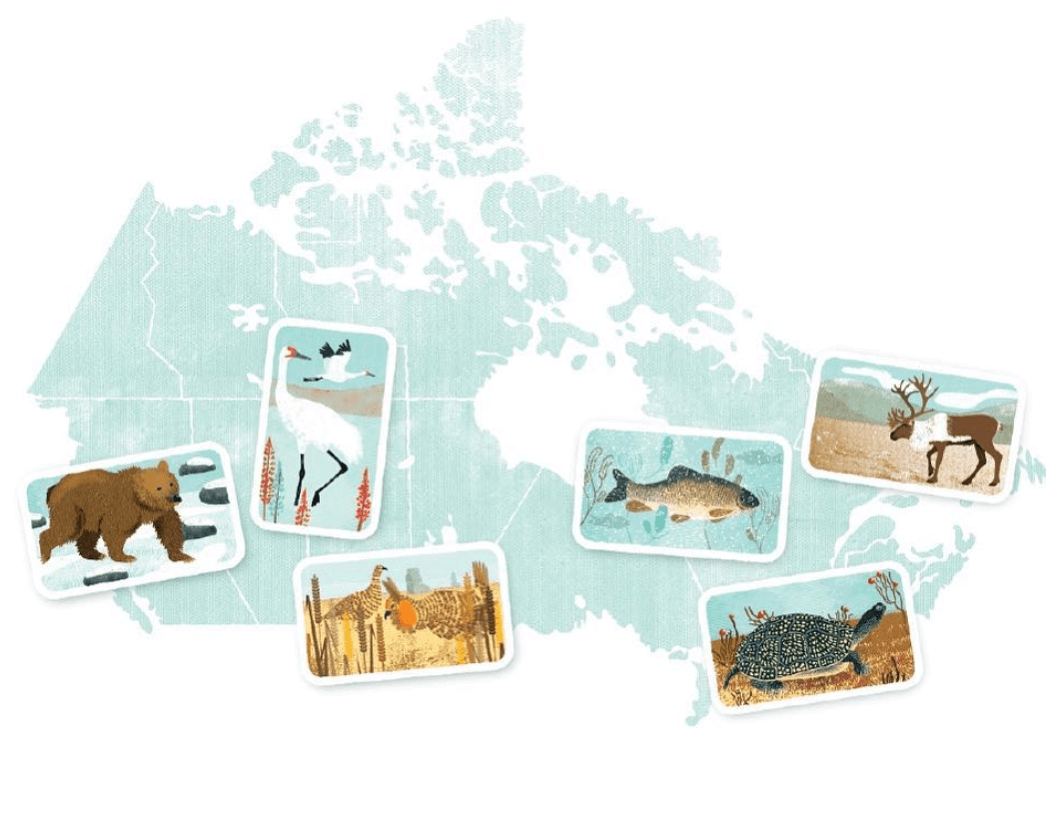 In October 2017, WWF-Canada released its “Living Planet Report,” assessing the country’s endangered and threatened species. Their findings paint a bleak picture of Canada’s wildlife: Between 1970 and 2014, half of the 903 monitored species had declined in population—a loss of approximately 83 percent on average. Habitat destruction, climate change, and human activity are the most common threats to these animals. We’ve selected a few species living across the country to illustrate just how widespread the problem is.

British Columbia is one of the last places that grizzly bears can be found in their natural habitat, but for decades the population has dwindled in some of the province’s most densely populated areas. We’re also killing them—sometimes deliberately. According to the auditor general of B.C., 389 were killed between 2006 and 2015 due to “human/bear conflict.” Though regulations have been put in place to stop trophy hunting and to better track grizzly bear numbers, they have been extirpated in places like Kamloops, Kelowna, and Vancouver. While there has been some population growth in areas of B.C.—in 2012, the Finlay-Ospika and Muskwa Grizzly Bear population units had the highest estimated number of grizzlies in the province, with 971 and 840 respectively—that growth is thought to be happening independently of the ministry’s efforts.

You can guess by its name where the Greater Prairie-Chicken formerly lived: in the large, lightly grazed grasslands of Alberta, Saskatchewan, Manitoba, and Ontario. Because it needs between 5,000 to 6,000 hectares to maintain a thriving population, the urbanization and agribusiness of these prairie lands have all but extirpated the grouse from its Canadian homes. The Greater Prairie-Chicken can now only be found in parts of the United States.

The copper redhorse is the only fish that lives exclusively in Quebec waters. It’s been listed as endangered on the Species at Risk (SARA) Public Registry since 2007. While there are no concrete numbers as to their current population, researchers have found that the remaining fish have problems reproducing naturally, due in part to the fact that they reproduce later in the spawning season than other fish.

Pesticide application happens around the time the copper redhorse lays its eggs, and the spike in pollutants in the rivers—along with lower water levels—adds to their vulnerability.

Atlantic-Gaspésie woodland caribou are on the brink of extirpation. In 2006, the population’s numbers were pegged at approximately 200. Deforestation and industrial expansion have limited their natural habitats, with many of them now found on the border land of Parc national de la Gaspésie.

While there have been regulations put in place by the park to stop hunting, and to deter predators like black bears and coyotes, the population has continued to decline. In 2015, the SARA Public Registry followed up on that report, and found that the population had dwindled to about 120. They’ve forecasted that the Atlantic-Gaspésie populations will become extinct by the year 2056.

While a large portion of Blanding’s Turtles can be found in Quebec and Ontario, an isolated population in Nova Scotia was designated as threatened in 1973, and is now endangered. In total, there are only about 180 Blanding’s Turtles left in their central Nova Scotia home. These turtles don’t reach maturity until at least 15 years old and lay eggs once every year or two. Because of their relatively small numbers, even one female fatality can heavily impact the population. Their biggest threat, apart from increased road development and traffic, are what are called “subsidized predators”—animals, like raccoons, whose populations have grown thanks to human development and urbanization. These predators hunt and eat the Blanding’s Turtles’ eggs before they even have a chance to hatch, further decreasing the number of turtles that actually reach maturity.