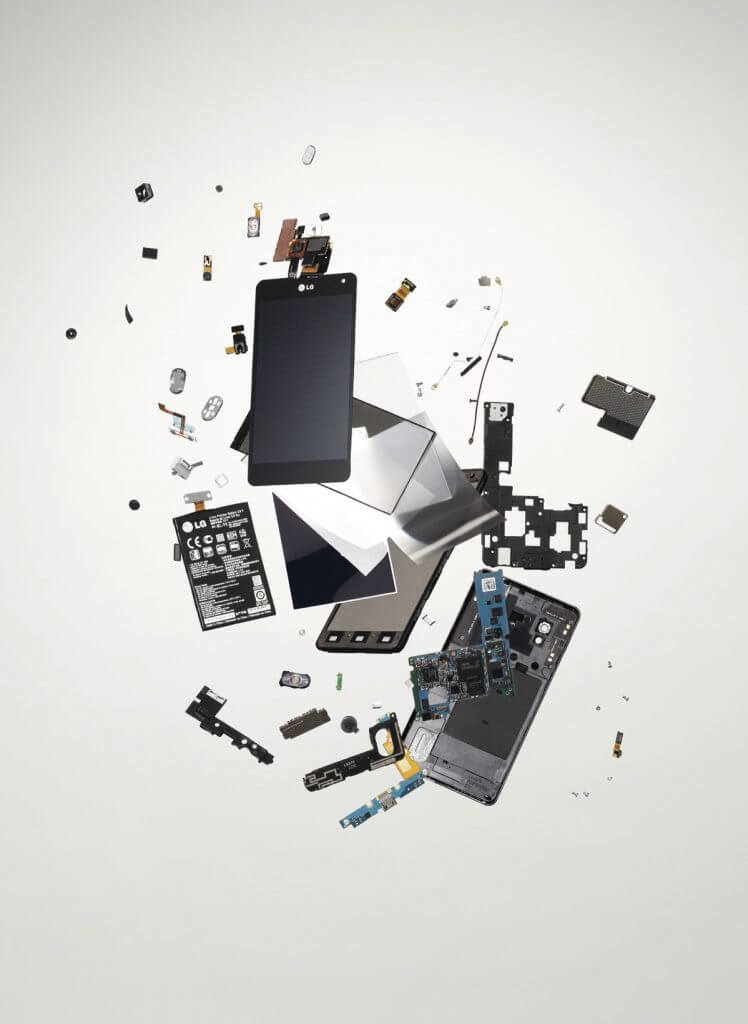 Todd McLellan’s Things Come Apart series features disassembled technology, both old and new, to explore our relationships with their disposable nature. As technology improves and we replace our gadgets at a rapid pace, what comes of the components that make it work? McLellan shoots each disassembled machine by dropping it from a platform, creating a stunning view of technology, inside out.

The next time you look at social media, I want you pay attention to a subtle detail on each post: the timestamp. If you’re on Twitter, for example, when was each post published? When I was writing this paragraph, I glanced down at my Twitter feed, and here’s what I saw: A tweet about a Chinese internet CEO acting nuts (53 seconds ago), a snapshot of a friend’s cat asleep in an inbox tray (one minute ago), a hot take on Hillary Clinton’s book (two minutes ago). And on and on, backwards into time, minute by minute.

This is what’s known as “reverse chronological” design, and it’s the organizing principle for nearly every social media giant. Log into Instagram, Facebook, a discussion board on Reddit, and just about any blog, and boom—it’s all reverse chron. They’re constantly refreshing the feed, pushing the newest, latest updates to you. History recedes in a flash. What happened last minute is immediately pushed away, as is last hour, and the last day. It makes it awfully hard to examine the past, even the quite recent past. If I wanted to see what my feed looked like, say, last week? I’d be sitting there scrolling backward until my forefinger fell off. Twitter doesn’t want me doing that.

These days, we’re warned about the myriad of ways that social media corrodes our culture. We worry about how it creates “filter bubbles” and fosters a rotting swamp of abusive trolls. We’re told it’s sapping our penchant for face-to-face human contact: “We have sacrificed conversation for mere connection,” as MIT professor Sherry Turkle writes. And hey, how about those gormless millennials? Their selfie snapping and relentless hustling for likes has become “a conduit for individual narcissism,” if you believe psychologist Jean Twenge, co-author of The Narcissism Epidemic.

Me, I’m not so sure. I’ve been writing about technology and its effects for two decades, and my sense is that many of these fears are overblown. Toxic trolldom is real, certainly; but fears that technology will turn us into numb, self-obsessed morons are as old as the hills. They’re likely driven more by intergenerational friction, the habitual scorn of the olds for the youngs.

If you asked me what the true danger about social media is, I’d say it’s much more subtle. It’s the problem of time—and becoming stuck in the present. It’s the relentless pressure of reverse chron.

When we talk about Canadians famous for analyzing new media, we often think of Marshall McLuhan first. With his koan “the medium is the message,” McLuhan synthesized his basic idea: Our tools, from electric light to television to phones, change not just how we communicate, but what we communicate about.

But if you asked McLuhan, he would tell you that Innis got there first. In the 1920s and ’30s, Innis cut his teeth as an economist studying how Canada’s abundant resources—furs, wood, fish—shaped the country’s economy. Later on, he became one of Canada’s first red-hot cultural nationalists, inveighing against the way American art and military power warped Canada’s own industries.

Late in his career, though, Innis suddenly pivoted, becoming mesmerized by how media changed the timbre of our cognition. In The Bias of Communication, published in 1951, he went as far back as early Mesopotamians to analyze how their medium, clay tablets, affected the power of elites. Clay, Innis noted, was durable—it’ll last for aeons—but heavy and hard to move. As a result, any religious edicts written down in cuneiform would hang around for a long time, but wouldn’t reach very far, geographically. You can’t easily lug a thousand pounds of religious texts for a hundred miles. So power endured over a long time period, but each empire had a small radius.

The shift to paper, beginning with papyrus in Roman culture, inverted this proposition. Now, Innis noted, written-down rules and edicts and religious tracts were lightweight, so they could be carried for thousands of miles by horse. This is part of why the Roman Empire spread all the way up to Britain, and why—in the 15th century, when Gutenberg created the printing press—Martin Luther’s rebellious theses spread across Europe in a matter of months. Paper accelerated the spread of ideas. It was great for memes.

But paper also, Innis pointed out, made ideas transient. That’s because, compared to clay tablets, paper isn’t very durable. It fades, it gets ripped; the Library of Alexandria burns. Perhaps worse, from Innis’s point of view, is paper encouraged disposability. Once newspaper printing presses started cranking in 17th century—pushed into overdrive by steam power in the 19th—society was flooded with the weird new form of “daily news,” something you discarded immediately after reading.

Many regard early newspapers as cradles of modern democracy and human rights, and there’s obvious truth to that. But Innis worried that newspapers had a structural bias: They focused culture relentlessly on the present. To make money, newspapers had to train us to come back every day—to become convinced that if we stopped keeping up, stopped checking the papers, we’d miss something important, or mesmerizing, or, more likely, deliciously lascivious. (That’s partly why newspapers quickly discovered the allure of covering long-running trials: “It is doubtful whether anything really unifies the country like its murders,” as Innis quotes one 19th-century wit.)

Modern media was changing our relationship to time. It gave us “an obsession with the immediate… a criticism of the moment at the moment,” Innis argued, quoting Henry James. News media’s message, in the McLuhan-esque sense, was to stop paying attention to the past; hell, to stop paying attention to last week, or even yesterday. It was a format that “inevitably shrinks time down to the present, to a one-day world of the immediate and the transitory.” It made us creatures of “present-mindedness.”

A culture that is stuck in the present is one that can’t solve big problems. If you want to plan for the future, if you want to handle big social and political challenges, you have to decouple yourself from day-to-day crises, to look back at history, to learn from it, to see trendlines. You have to be usefully detached from the moment.

What Innis feared—as his biographer Alexander John Watson puts it—is that “our culture was becoming so saturated with new instantaneous media that there was no longer a hinterland to which refugee intellectuals could retreat to develop a new paradigm that would allow us to tackle the new problems we are facing.”

Which brings us back to today’s social media and its omnipresent reverse-chron design.

What in god’s name would Innis have thought of Twitter? He died in 1952, so on a sheerly technological level, smartphones and the internet would have seemed like distant, unfamiliar sci-fi. But if you showed him the way social media is organized? He’d probably wince in recognition. Reverse chron is present-mindedness jacked into hypermetabolic overload. Hey, someone said something 15 seconds ago! Now someone’s saying something else! Drop what you’re doing and check it out!

If you ask me, Innis nailed it. Present-mindedness is our biggest danger. Forget all the handwringing about our social habits; I doubt technology is turning us into much bigger narcissists than we already were. And politically, tech has had many wonderful effects—particularly when long-ignored voices have learned how to connect and persuade online. Black Lives Matter and the “We are the 99 percent” economic message of Occupy Wall Street, for instance, both blossomed via social media.

But reverse chron? That’s well and truly a mental trap. Social-media firms know this: They’re experts at hijacking our attention, sucking us into the day-to-day drama of whatever’s blowing up online right now. They use reverse chron because it’s so addictive.

It’s up to us to heed Innis’s warning, and fight back. On one level it’s a personal battle, seizing back control of our own attention: We have to learn to enjoy what’s powerful and delightful about online tools, but to resist their casino-like seductions into the here and now. Some of society’s biggest problems, such as global warming, require careful long-term planning; we can’t tackle them if we’re being dragged in 20 directions every hour by shiny objects and oven-fresh hot takes.

We could use better tools, too. Since their very design affects how we use them, how about forms of social media that don’t focus so narrowly on what’s happening right this instant?

Facebook and Twitter have recently tried to gently tinker with such experiments, occasionally highlighting posts from a few hours or days ago. But I’d love to see more designs that are even more radical yet.

How about this: When I post about a subject, have the social network show me powerful, useful related posts and threads from weeks, months, or even years gone by. Or remind me of thoughts or ideas I myself posted on the subject from years past; connect me with the history and trajectory of my own cognition. Or let’s be even more radical: Why not crawl through Google Books’ public domain archive and find me related work published on the subject in the 1900s? Imagine a social network with content that spans centuries!

This sounds a bit nuts, I realize, and utopian; I’ve no idea how you’d convince social-media barons to rejig their wildly profitable mechanics of reverse chron. But I suspect many people already have an appetite for posts, news, and material that drags them out of the present. Behold, for example, the weird success of @HistoryInPics, an account with more than four million followers that does nothing but tweet pictures of historical photos. (Even better, it was started by two teenagers; they’re now young twentysomethings.)

There’s no simple answer here. But it’s worth thinking about this subtle trap that social media has created. History is long, and worth learning from. It’s time we grappled with the problem of time itself.