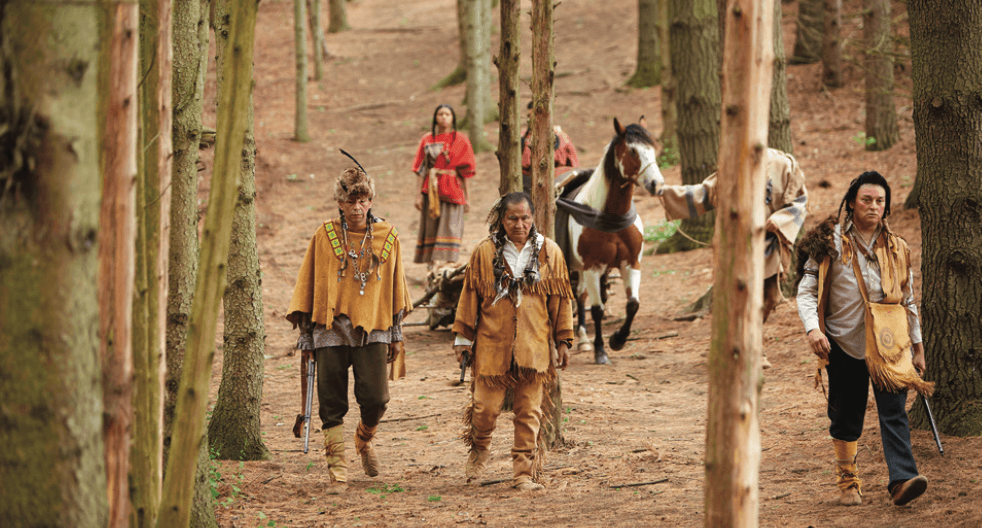 When I was a child, I used to confuse the title of Us Weekly magazine—a glossy about celebrities—as U.S. magazine, the entirety of America summed up in a glossy about celebrities. Twenty years later, the same can be done with Canada: The Story of Us. First-person plural pronouns are a messy affair, and it turns out that the CBC, rather than developing its own approach, borrowed a format from production company Nutopia that had previously been used to create America: The Story of Us. It shows.

Originally, I decided to watch The Story of Us because, as a white Canadian settler, it’s particularly important to be aware of national myth-making so that I can recognize my own role and understand how my country sees itself. (Or, at least, how the CBC sees us when it’s asked to make a glossy docuseries to celebrate Canada’s 150th birthday).

But the series is both a failure in the way it navigates and frames history as well as the way it presents that history. Though each CGI-enhanced, this-is a-CRUCIAL-moment-in-the-fabric-of-Canada episode aims for action-movie-level tension, I couldn’t make it through more than four. Each one felt like the longest 44 minutes of my life. I say this having had broken bones, suffered severe food poisoning, and made many awful life decisions.

The series suffers from both momentary and major problems. Momentary: The War of 1812 is referred to, for example, as Canada’s “War of Independence.” No. Canada did not confederate until 1867, and, last time I checked, we are still a constitutional monarchy! The U.S. invaded, and groups of British colonists banded together with First Nations and fought to repel them. A war repelling an invading force is not a war of independence. It’s just a war. (One in which the British burned down the White House, which sadly does not receive play in this dull-as-dust episode.)

Major: Each episode features a blend of dramatic reenactment and commentary from experts and, no offence to handyman Mike Holmes or MMA fighter Georges St-Pierre, irrelevant celebrities. It’s hard to say, but the experts seem to have been fed lines from a script—lines that often echo the narration instead of adding anything interesting. For its part, the narration isn’t much better: Too little time is devoted to historical complexity, and too much time is devoted to underscoring, in case the viewers had not noticed it themselves, the deep and lasting importance of the moment at hand. The most egregiously ridiculous celebrity talking heads include Jim Balsillie and former Dragons’ Den panellist Michele Romanow who provide an “entrepreneurial” context for everything from the making of the Canada stove to the digging of the Welland Canal. Lesson one: Canada’s reason for existence was almost wholly mercantile. Lesson two: Our current government’s obsession with innovation is cut from the same cloth, and we’re just as unaware about it now as we were then.

In an effort to draw audiences in with star power and CGI, each episode feels incredibly slow and bogged down by extraneous contextualization. Had the structural defects of the Welland Canal been handled in narration, the series could have made more space to stop and question the overhunting of beavers or some tales from the seedy, racially complex and often violent history of the Hudson’s Bay Company.

The CBC had 10 hours, before commercials, to tell whatever stories it felt was important to our history. Those 10 hours could have come together with maps, visuals, and recreations to outline a cohesive timeline of Canada from well before settlers until now—something like the David Suzuki-narrated Geologic Journey, which tells the story of the geologic history of present-day Canada. Or they could have been used to challenge the dominant narratives of history we’ve learned in school, focussing on lesser-known figures, complicating our understanding of people like Sir John A. Macdonald, and challenging the difficult racist chapters of our past—like the Chinese head tax, the proposed ban on Black immigrants, or the Sixties Scoop. Or, as Metro columnist Vicky Mochama pointed out on her podcast with Ishmael Daro, Safe Space, all that time could have turned into many new Heritage Minutes.

Almost anything would have been better than shoehorning Canadian history into Nutopia’s format. Canada continues to celebrate the military and mercantile highlights of our past while overlooking much of our complex history—history that is more interesting and more important than much of what’s included in The Story of Us. When it comes to learning about our history, it’s time to change the frame—to focus less on celebrity and more on policy and everyday people; to move away from celebration, and toward education and understanding.