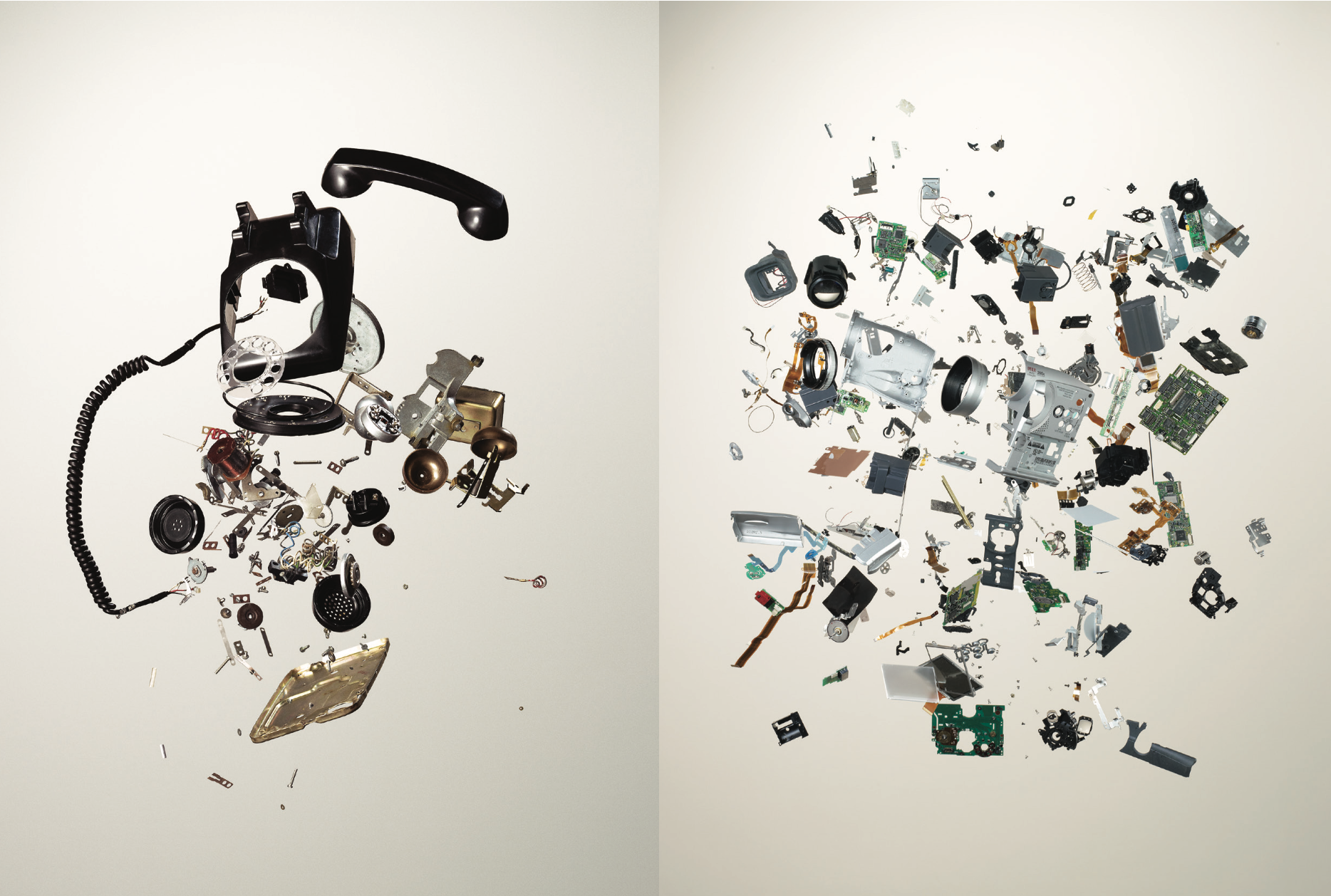 On February 1, 2003, Space Shuttle Columbia came apart somewhere over Texas, reminding us that putting people into space is hard to do and very, very dangerous. Engineers determined a piece of foam that broke off during launch had damaged the heat shield on one of the wings. NASA knew about it almost immediately and for the two weeks Columbia was orbiting Earth, they worked overtime with the Boeing Corporation to figure out whether or not they had a real problem on their hands, wedging their findings and analysis into about 28 slides’ worth of PowerPoint. One of those slides included the word “significant” five times, as in “can cause significant damage.” The gist was that yes, this could be a “significant” issue, but it’s also “significantly” outside the test parameters, so there’s no way to be certain. The bit of the slide that emphasized there was good cause for concern was a bullet point nested under a bullet point nested under a bullet point, which is the most PowerPoint-y way to display information.

The interpretation of the deck was that the risk to the craft and its astronauts was minimal. The misunderstanding stemmed from PowerPoint itself—the way we use it and how it inherently shapes content. “How is it that each elaborate architecture of thought always fits exactly on one slide?” writes American statistician Edward Tufte in his essay, “The Cognitive Style of PowerPoint” (emphasis his). “Medieval in its preoccupation with hierarchical distinctions, the PowerPoint format signals every bullet’s status in four or five different simultaneous ways: by the order in sequence, extent of indent, size of bullet, style of bullet, and size of type associated with various bullets. This is a lot of insecure formatting for a simple engineering problem.” Presenting the problem in PowerPoint stripped it of gravity, because PowerPoint is an unserious tool. If something is really important, surely it would be presented using words in sentences and paragraphs, in robust reports with nuance and elaboration, not decks with bullets and fun slide transitions. The smartest minds on the planet were thwarted by presentation software. Seven people died.

But blaming the software is unfair. It wasn’t buggy. On the contrary, PowerPoint always works exactly as it’s designed to work. The error was with people. It’s not about the specific people who looked at the slide that said “significant damage” and thought, “I’m sure it’s fine.” It’s about all of us. The problem is who we’ve become in a world where PowerPoint exists.

When trying to describe Marshall McLuhan’s ideas in a 1967 Saturday Review article, John Culkin wrote, “We shape our tools and thereafter they shape us.” We love to make things, but it is our things that come to define us. We make the thing, then we turn into people who have the thing. We made PowerPoint, then we became people who have PowerPoint.

McLuhan made a career of saying smart and prescient things. But it’s the thing he’s most known for—“the medium is the message”—that keeps impressing in its beautiful, simple brilliance. In his (relatively) famous 1969 Playboy interview, he said, “Man remains as unaware of the psychic and social effects of his new technology as a fish of the water it swims in.” When technology becomes invisible, so do its effects. Predicting what those effects will be, or even noticing them while they are happening, is basically impossible. Correlations look (and often are) spurious at best. Futurism is a mug’s game. Something is new and scary and amazing, and then all at once it is ubiquitous and ignored. The moment we take a technology for granted is the same moment it goes to work shaping us.

Consider cars. We made cars and then we turned into people who have cars. We changed manufacturing, jobs, and unions because of cars. We carved roads into the landscape and built cities out of pavement. We put garages on houses and red lines on maps. Teenagers got pregnant and Kerouac took a road trip. We created an entire global economy that relies on sucking stuff out of the ground and lighting it on fire while the stink chokes the planet. For a while we “asked for directions,” and then we just put the directions on our phones. Think of the effort required to get real-time directions: A thing in space knows where you are and tells a thing in your pocket to stick a blue dot on a map you can control with your finger. That exists because we are car people, though it’s not something Carl Benz or Henry Ford had in mind.

How could it not?

The smartphone is a perfect little package of personal distraction and cultural disruption. We look at our phones more than we look at each other. We text and tweet and snap more than we talk. We like and fave and heart more than we love. The phone permeates our lives—first it was our work lives, then our home lives, then our sex lives— reducing the complexity of being human to a few simple gestures.

Okay, I’m being hyperbolic. But not by much. The phone has become a synecdoche for all the ills of the modern world. In September, The Atlantic ran a story by psychologist Jean Twenge asking: “Have Smartphones Destroyed a Generation?” She argues that the one-two punch of phones and social media has left today’s kids miserable and generally unprepared for the world. It was as convincing as it was horrifying. Even beyond the stats and research, it feels accurate. Anecdotally, my two-year-old is a ninja with an iPhone, firing up Peppa Pig faster than you can say, “What the hell is a Peppa Pig?” My five-year-old would swipe a million Poké Balls at a million Pokémon if given the opportunity. My teenager will tap his way through oblivion if not prompted to come up for air. I don’t think of my kids as being miserable (or at least not any more miserable than I was), but I also remember how my parents never seemed in tune with my feelings when I was young (and I definitely watched too much TV).

It’s easy to point out possible solutions to what we mostly see as bad habits. Limit access to screens. Set timers. Keep your phone in your pocket. Take the kids outside and do something—anything—with them. At the very least, it won’t hurt them to get a little more fresh air while fresh air is a thing that still exists. But it is also beside the point. You can take your kids camping every weekend and they’ll still eventually be on Facebook. They’ll still swipe right to date, post selfies, share memes, play Candy Crush. You can do everything to make sure they grow up knowing there’s more to life than a black slab made of glass and magic, but someday they’ll own one just like everybody else. The butterfly has flapped its wings and we’re just waiting to see the effect.

In 2001 I met my wife at a student journalism conference while we were living on opposite sides of the country. We spent two-and-a-half years like that, which wasn’t ideal, but it also wasn’t as tough as people assume because we talked to each other a lot. Käthe and I are both very verbal, so I’m not sure our relationship would have worked any earlier in history. To ultimately end up together we needed everything that led to Alexander Graham Bell’s original telephone patent, decades of infrastructure development stretching wires from coast to coast, and cordless phones to talk for hours away from our respective roommates. And we needed capitalism—a complicated beast of a thing—to force somebody, somewhere (probably in marketing, certainly a hero) to come up with the brilliant concept of “unlimited evenings and weekends.”

The shape of society owes a lot to the phone. Like the smartphone, the old-school telephone had effects on work and home (and, yes, sex). It made the world smaller and faster. In Understanding Media McLuhan wrote, “The child and the teenager understand the telephone, embracing the cord and the ear-mike as if they were beloved pets.” (He then spends several paragraphs on prostitution and phones.) I’m sure he wasn’t specifically referring to two 21-year-olds meeting at a conference and deciding Nova Scotia and British Columbia weren’t so far apart, just as I’m sure none of the people involved in inventing the phone considered how it might impact our young romance.

So how do you prepare for a future when you don’t know what it is you don’t know? How do you create a car in 1885 or 1908 or 1950 or pretty much any time before 1990—before climate change was a thing we talked about? How do you invent television before Netflix? How do you create the phone before Facebook, Twitter, Snapchat, Instagram, and the millions of other things we use our phones for that have nothing to do with phoning people? How do you design PowerPoint so it doesn’t blow up a spaceship?

In writing of McLuhan, Culkin suggested in his Saturday Review article that the results didn’t have to be inevitable “as long as there is a willingness to contemplate what is happening.”

But usually it just feels like we’re fish oblivious to the water.