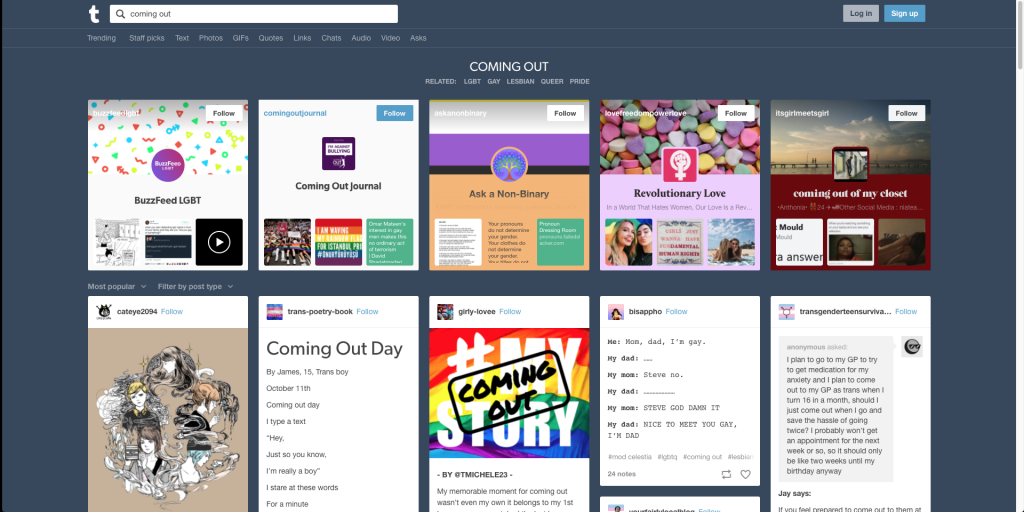 It’s 1:30 a.m., and I’m in my family’s living room giggling and staring at my laptop screen. I’ve been online for 10 hours in a chatroom with a rotating cast of friends. We have members from every time zone, scattered across the globe; the Australians are just coming online while some of the Americans are logging off. Some have work tomorrow, most have school like me. But the current topic is more important: The newest episode of Doctor Who featured a lizard lady and her lesbian lover, and it’s a big deal.

This is how I spent most of my nights from age 14 to 18. Years online allowed me to build up a network of queer friends across the globe when I was sorely lacking any in real life.

I grew up with my sexuality a secret. I always knew that I liked girls, but people around me kept reminding me why I shouldn’t tell anyone. When I was four, a friend told me it was yucky to kiss girls. I told my best friend I might like girls and boys when I was 11; when she told a bunch of my peers at a sleepover I wasn’t invited to, they decided that it was disgusting. At 13 a teacher told me gay marriage was a sin. My French Catholic school upbringing instilled in me the idea of guilt, so I felt ashamed when I looked for queer content. Over time I learned to keep my sexuality, my feelings to myself.

My mom hooked up our household with an internet connection in 2006, shortly after the sleepover incident. I found my comfort zone online. It started slow, Googling terms and immediately clearing my search history in fear. Forums became my go-to for stories of people’s lived experiences. I’d stay up late using the web browser on my handheld video game console to read as much as I could. Hiding under my blanket with the lights out, I’d go through pages of LGBTQ support forums. I found out other people liked girls too, and that it was normal to have crushes on my friends.

Queer mentorship is complicated: In my everyday life I didn’t have anyone to talk to or look up to. But online, there were thousands of people who could offer support. My parents were initially uncomfortable with the amount of time I was spending online; they didn’t understand why I was staying up late and constantly on my phone. One night, I had my mom come into my room and meet my chatroom pals. They introduced themselves and made small talk, and from then on there was a new understanding. She would tell me to say hi to people I was messaging, and even bought a card to mail to one friend with whom she shared a birthday. She saw how important these people were to me, that I had found a lifeline in friends who supported each other. The internet can seem like a cold and untrusting place; but for youth, like me, struggling with identity, online connections are invaluable.

By 2013 the internet helped me understand the nuances of my different identities, and I came out as both queer and non-binary. For me being non-binary means being completely outside of the gender binary of male and female. I try to avoid gendering products, ideas, or behaviours. I prefer to be confusing rather than categorized. I like to imagine my gender like a void—endless and vacant.

I also started making online LGBTQ friends. Mazz, for instance, was only a few months older than me but knew much more about queerness. After my first LGBTQ dance held in a neighbouring town’s high school, Mazz encouraged me to message the cute girl I’d met and danced with. I made a Tumblr blog when I was 15 and slowly began following other blogs run by queer kids. Some analyzed queer representation in media; others were an online record of their owners’ existence as LGBTQ people. This online, intangible world became a haven: It was proof others like me existed.

My online support system bolstered me to talk openly about my identities in real life. Later in 2013, I came out with a Facebook post that friends, family, and classmates could read. A few hours later I got a message from my mom asking what non-binary meant and what she should know. That was that: No awkward conversation, no crying, no shouting. The internet helped me streamline my coming-out process: It gave me the power to plan my words and share my identities with a chosen audience, and it gave my mother time to understand and research. The next time we met in person, she used my preferred pronouns—and it’s been that way ever since.

Coming out online gives the process a form of permanence: It’s always in my web history and I can re-share it without having to stress. This year when I moved and made new friends, I posted on my Instagram story for Trans Day of Visibility to remind everyone and let new friends know that my pronouns are they/them/their. The internet also provides filters: I can easily remove those who don’t approve of my identities from my life without a scary and potentially dangerous in-person interaction.

These days I’m vocal about being non-binary and queer, and I’ve built a community offline. Online, I’ve kept in touch with my chatroom friends. I might not need them as much as I did, but we still send each other links about our favourite shows and encourage one another.

The internet has revolutionized how queer youth can learn about themselves. Queer knowledge and mentorship is more accessible than ever before. More kids will be able to educate themselves, find communities, and even change the world along the way.

Sidney Drmay is a white, queer, non-binary weirdo who lives on the internet and loves sour keys. You can find them on Twitter @webspookie.