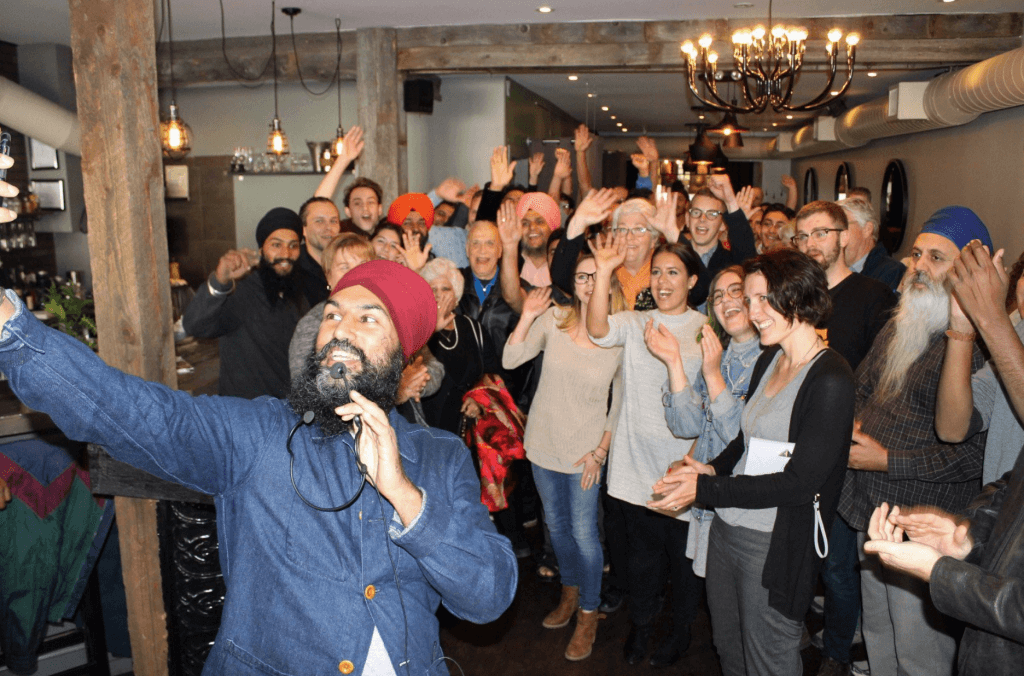 This month, the NDP and Canada achieved a historical first. Jagmeet Singh, former Member of Provincial Parliament in the Ontario legislature was named the eighth leader of the federal NDP. The moment marked a dramatic shift for the party, which has struggled to connect with youth and racialized voters. But it also signifies new possibilities of what political leadership in Canada can look like.

At the beginning of this leadership race, there were plenty of changes I wanted to see in the NDP: namely, the party needed to return to its bold progressive principles to effectively hold the Liberals to account—particularly on their more progressive campaign promises. My vision? The NDP needed a stronger version of social democracy to emerge from the race, one that would defend and expand on principles such as environmental protection, health care, Indigenous relations, income inequality, and precarious work, all while creating an accessible pathway for the realities of racialized people to be a part of and feel represented by the party. The latter part of my vision weighed a tad more heavier.

A shift to the left is a goal often spoken of within social democratic discourse. It may be to convert to democratic socialism in order to emphasize the need to nationalize and increase public ownership of services; or to strive for a more subdued version of our current economic system that merely addresses the ailments of capitalism. However, what often gets lost in the midst of these conversations are how sexism, racism, and other forms of identity-based discrimination are accounted for. In a diverse country, with a typically three-party system, accounting for these experiences are essential in order to engage and appeal to those who are not white. This two-part version of social democracy, like the one I put forward above, in my observations, has yet to be achieved in Canada. Perhaps until now.

On October 1, Singh captured 54 percent of the vote on the first round. It may have appeared to be a landslide victory, but the media and Canadians shouldn’t discount the hurdles Singh faced in order to get here—from a public racist heckler, to what often appeared like an “anyone but Singh campaign” during the leadership debates. Withstanding these challenges, some race-watchers, like me, felt that Singh would be the answer to the party’s woes, even while others remained in vigorous opposition.

Singh was largely criticized for what some called his “centrist” policies. To support these centrist claims, comparisons were drawn between Jagmeet’s and Niki Ashton’s campaign. Ashton, a fierce democratic socialist, came out the gate with a proposal for free tuition, a plan for a national pharmacare and dental care program and plan for economic justice. However, what set her apart from the other candidates was her desire to see increased nationalization of public services. Despite being an admirable goal, it’s one that translates poorly to the overall general public—firing up a small subset of Canadians: the highly educated and disenchanted socialist.

The criticisms launched against Jagmeet for not being left enough had me reflecting on what success should look like for the NDP post-leadership race. I’m of the belief that before the NDP can make such a democratic socialist shift, the party needs to bring racialized and young people into the fold. A hard left would not only alienate those who are unfamiliar with the principles of social democracy, much less, democratic socialism; but it would impart a purity test willing to exclude those whose viewpoints don’t exactly line up. This would make it nearly impossible to grow the party and form a pathway for new members to feel welcomed and view the NDP as a place to learn and grow within. A Singh-led NDP can help to fill that gap.

While I commend the NDP membership for choosing Singh as their new leader, this important victory simultaneously requires a reflection on the racism entrenched within progressive politics. A lack of sensitivity over racialized voters who opposed the Ontario sex-ed curriculum that Singh worked closely with to help ease their transition were quickly labelled as conservatives during the debate and deemed not worthy of being engaged by the NDP. Furthermore, polling put forward during the race to determine whether Quebec is ready for a racialized, turban-wearing leader were disturbingly received with a sense of normalcy. As a progressive party that prides itself as the “social conscience” of Canada, an evaluation on whether Canadians are ready to have representation by historically marginalized groups are unacceptable. Public readiness should never be polled and used as justification when determining whether a person’s race or religion deems them appropriate for a job. The smear campaign launched against the new members Singh brought into the party—who were predominantly racialized—barely received an ounce of criticism from his opponents or the party. Singh still came out victorious, but this doesn’t mean that the racism plaguing progressive politics has been defeated.

During this time, lest we forget that urge of institutions and political entities to use racialized people as props, either to win votes or receive a surge in popularity. The tendency to want to appear inclusive and responsive to the changing demographics of Canada, at times, often overrides the need to actually do the necessary work to address and/or change both pre-existing attitudes and workplace culture—all of which are necessary for people of colour to thrive and be successful. Political institutions and parties of all stripes are guilty of this.

Without a doubt, Singh’s win is a pivotal moment for the party. But he is not the only charismatic, progressive-minded person of colour working hard to join and take on leadership roles within the NDP. The stories often missing from this historic moment are the countless racialized organizers, volunteers, and candidates who see the NDP as a party worth joining—partly in fact due to Singh and the courage he displayed when he joined the race. He did what many saw as an impossible, inspiring a new generation of future political leaders.

It is now the responsibility of the NDP to support and nurture these candidates, new members, or those simply interested in the political vision the party has to offer, to encourage them and provide them with the resources that are needed in order to be successful. The party cannot rest on their laurels now that they have a person of colour at the helms of their leadership. This act of history-making must be followed-up with an organizational shift in attitude and approach. In doing so, the NDP can then truly be a party where justice, inclusion, and equity is not only preached but also enacted from within.

Brittany Andrew-Amofah is a public affairs commentator. She writes and speaks about Canadian politics. Follow her on Twitter @BrittanyAmofah