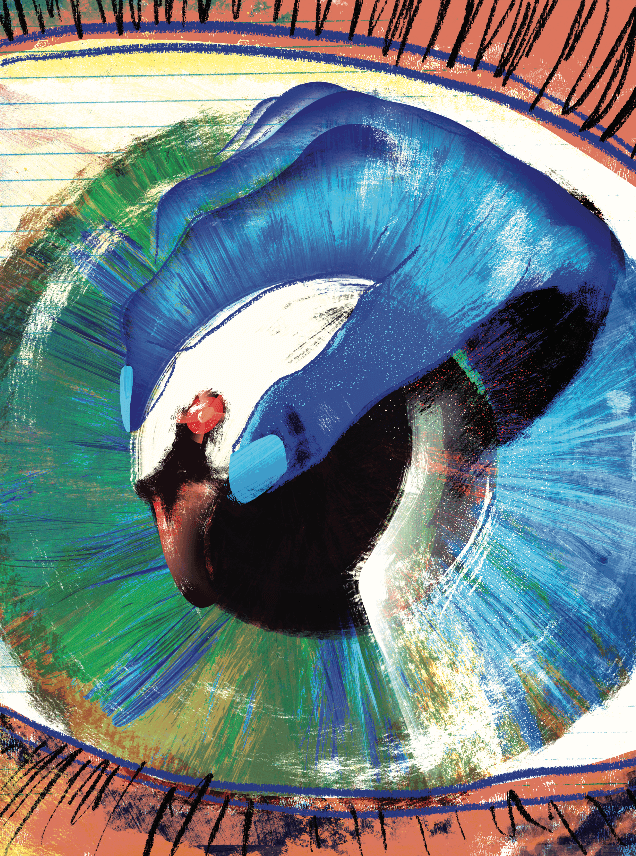 There was a knock on the door. Mum didn’t answer it. Maybe she didn’t hear it. I heard it. But I’m not allowed to do more than look through the screen.

I was only left alone twice or three times. One of those times someone knocked on the door and it was a big man. He asked, “Is your mother home?” and I said “no” and he asked, “Is your father home then, please?” and I said “no.” I remembered that I should not have said no but I couldn’t say yes so I fixed it by saying, “My big brother is home but he is busy.” But I don’t have a big brother. The man went away.

Later there was a knock on the door and I didn’t answer it in case it was the big man again. My mum didn’t go and see who was there because she didn’t hear it. I know because I waited on the stairs until the person went away. I went into the kitchen and asked, “Mum did you hear someone was knocking on the door?” and she said, “Oh? I didn’t hear it.” Then she went to look through the screen and no one was there.

My big sister asked me to tell her a story so she could sleep and I told her “once upon a time there was a knock on the door.” She said, “Ooh good beginning” and I kicked my feet together because I do that when things feel good. It was becoming morning and I tried to open her curtain to look for strangers but my sister said “dark.” I said, “It doesn’t smell like vodka this time,” because her favourite is vodka and tomato juice and she told me no it was whiskey and I should tell the story or get out of her room.

I said, “Once upon a time there was a knock on the door” and she said “good.” I said, “But nobody answered.” She said, “I don’t like that. I want to know who it is.” I was nervous she would kick me out but I still said, “No, no one answered it but I will tell you about the man who it was.” My sister closed her eyes and said, “Okay” and I pretended in my mind I was laying down a picnic blanket, because that’s what it feels like to start a story.

“Once upon a time there was a knock on the door, but nobody answered it. The man at the door was a big man. He had a cane but he didn’t need to use it. It was his dead grandpa’s and his grandpa was rich so the cane made him look rich, he thought. The cane had the face of a swan for a handle and red rubies for eyes.”

I was happy about the way the cane came out, because it sounded very nice. I have rubies in a ring for my birthstone, but they aren’t real.

“But the man leaned on the cane anyway so people would think he needed it at least a little.”

“It made him look dignified,” said my sister.

“What was the man’s name?” my sister asked but I told her she’s not allowed to know that yet and it’s my story. My cheeks got hot because really I couldn’t think of a name. I was still smoothing out the picnic blanket. She said “okay okay okay sorry” in my face and then I could tell I’d remember the whiskey smell for next time.

I said, “The man was the type who does bad things.”

“Well, he had love in his heart for people but he would also maybe smash a bottle on their heads to get their money from their pockets.”

“He would call the ambulance after, sometimes. He wasn’t a bad man.”

My sister’s stomach made a sound of trapped toots.

“He didn’t use the cane to smash their heads because he loved the cane a lot. He would never sell it or break it across something. He didn’t have a family any more but family was his utmost priority.”

I’ve heard my mum say that to my dad, “Family should be your utmost priority.” My sister made an ooh sound when I said it like making fun but also impressed.

“When the man knocked on the door of the house—it was a house like ours with people in it like ours—he wanted a lady to come to the door and for no men to be home. He knocks on a lot of doors hoping that.” “

But no one answered,” said my sister.

“No. There was a lady home but she didn’t hear the door because she was in the kitchen humming and staring at the oven door. But her kid heard the knock.”

“No, my age and stuff but different.”

“Her kid hears the knock.”

“Can you get me some water?”

I was out of there fast. I love getting my sister water or whatever she asks for because she lets me stay longer when she feels in debt to me. My mother said to Mr. Carlson, “I am in your debt” and he said, “Then I’m a lucky man.” It was because he brought her a bottle of wine, and she told me you say that when someone does something nice for you and you feel like you should do something nice back, but you aren’t going to.

I was downstairs pouring water into a glass with a sailboat on it because it’s the glass that holds the most water. I did my trick which is: I put in three ice cubes and then stirred it with a knife really fast until the cubes were nearly melted so the water was cold. I made sure to hold the knife a very straight way where it wasn’t clinking too loudly against the sides of the glass. No one likes it when you make that much noise. Like forks on teeth, stomping when you walk.

When you put a knife only in water it’s still clean and so I put it back in the drawer.

My sister drank the water in one gulp, and some dripped down her cheek and was nearly at her neck before her sleeve got it. She made a loud sigh when the water was gone and looked happy and then upset.

“Oh my god I have a fucking ice cream headache,” she said and I told her to make the roof of her mouth warm with her tongue and then I waited for her to say okay keep going. She said: “Alright, keep going.”

“The kid hears,” I said, and she said, “Oh yeah sorry the kid that’s you hears. You were saying the man.”

I didn’t tell her again it’s not me because I didn’t know who the kid was yet.

“I was saying the man. He wanted to come into our house, into the house I mean. So he knocked. The kid heard.”

“Whose head did he bash in?”

“That was the other time.”

“With a beer bottle.”

“Not beer. Other bottles. A bunch of guys who were coming from the bank.”

She was not going to be awake after the next thing I said. I would have to make it a really good thing for her to stay awake. I remembered what I had practiced that day and I said my sister’s name and she opened her eyes and really slow I blew a big bubble with just my spit. She closed her eyes again before the spit popped.

“Maybe the kid does answer the door.” I could feel the room changing like when I listened to a recording of a heartbeat and suddenly everything became heartbeats. My sister’s eyes were closed and my feet were kicking together.

“Once upon a time there was a knock on the door. The mother was in the kitchen but the kid heard. The kid went to the window and looked through the screen, and – what did the kid see?”

My sister was breathing bigger from her belly.

“The big man,” my sister said.

“The kid saw the big man. He was even bigger now. If there was sun behind him there wouldn’t be sun anymore.” “

“Big,” I said and I was feeling good. “In the shadow of the man the kid saw the rubies in the eyes of the swan and wanted to touch them. The man knocked again.”

“Answer the goddamn door.” My sister turned onto her side.

“The kid pulled the door open and the man filled it up. The man asked, ‘Is your mother home?’ and the kid said ‘yes’. He asked, ‘Is your father home?’ and the kid said ‘no’ and the man said ‘good’. ‘Let’s go and see your mother,’ the man said. The kid said, ‘Yes, I think you two will get along,’ and they went into the kitchen. The mother was humming but she stopped when she saw the big man. She asked him did he want some tea. He said, ‘Chardonnay, two glasses.’”

Her sideways mouth was smiling. That’s a joke my mum makes.

“The mother felt like the man had love in his heart and she was right. She made the kid some tea and got the bottle and two glasses. They all sat. They were very happy together.

“The kid’s dad came home from the bank. He had too many bills stuffed in his pockets. He walked in the door and he said to the kid to do the trick with ice cubes to make cold water, but also not to clang the knife. Then he saw the big man sitting at the table emptying the bottle into the glasses. He put up one hand towards the ceiling, meaning, what kind of a man are you that you are drinking my wife’s joke with her? He put his other hand up too, and moved it quickly, and bills were falling out of his pockets. But he didn’t go any closer to the man.

“The big man stood up and smiled at the father. He took the bottle from the table and gave it to the kid. He lifted the kid gently up on a chair, and the kid smashed the bottle on the father’s head.”

My sister was asleep. She drooled and her top lip was like a baby thumb. My father was lying on the floor and then he was gone. The man was standing but in the house the shadow wasn’t so bad as when he was standing in the sun. Mum said, “I’m glad you didn’t use your cane, it would be a pity to break it.” The big man said to her, “Oh yes, it is very special to me.” The big man held up the cane and said to me, “Some day, this will be yours. Thank you for letting me in.” He let me stroke the swan’s face and touch the ruby eyes.

Ann Ward is Senior Poetry Editor of Cosmonauts Avenue and Co-Curator of Springhouse Magazine. For eight years she helped run the Summer Literary Seminars in Kenya, Lithuania, and Montreal. Her work has appeared in Washington Square Review, GlitterMob, Stroboscope, Matrix Magazine, and CV2.