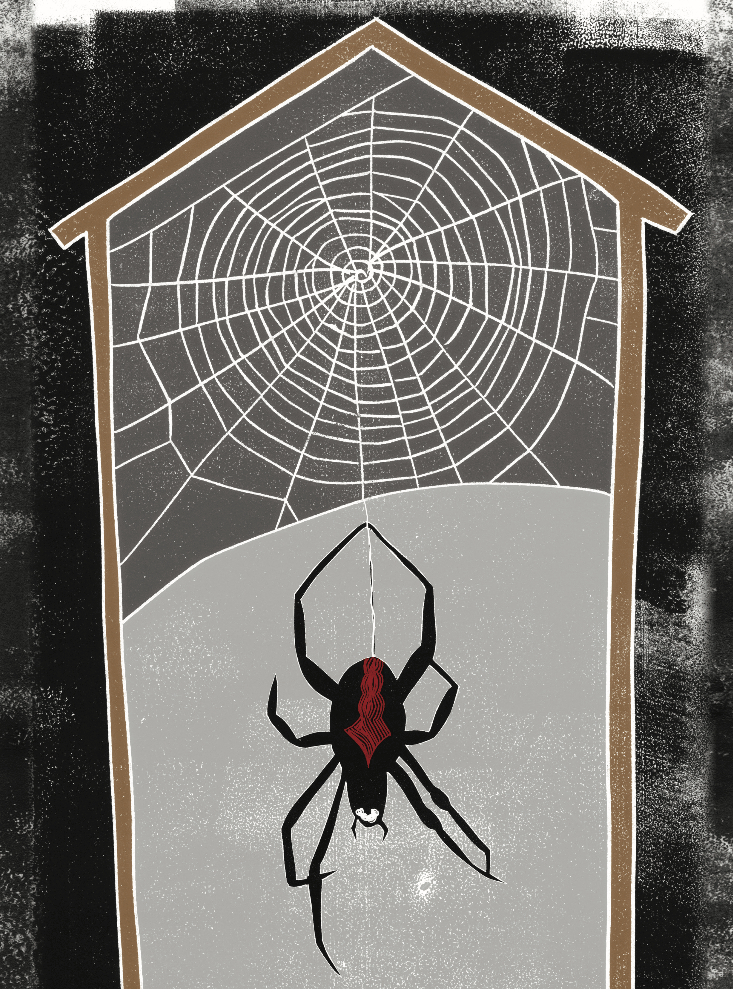 A life-hack I read on the internet told me to avoid landlords who are late for the first meeting. If I had followed the life-hack, I wouldn’t be living where I live now, which is in the sewer. So that’s another lesson I had to learn the hard way.

I was waiting for a potential landlord who listed a decent basement bachelor on Kijiji. It was 2:23 pm and our meeting was for 2:15 pm. I thought I’d give the potential landlord the benefit of the doubt. I thought the best course of action would be to text the landlord with something like, “Hey, I’m here to look at the apartment when can I expect you?” A little nudge, you know? I didn’t even get the chance to send that text because right as I was considering sending it I got a text that said, “Look at your feet.” I looked at my feet. What I saw was a black spider the size of a quarter hopping on the keyboard of an iPhone 4S. Typing. I saw it type the words, “Don’t freak out: I’m the landlord.” Then I got another text from the same number. The text said, “Don’t freak out: I’m the landlord.” I put two and two together.

“You’re the landlord?” I asked.

I was afraid of spiders.

“Are you afraid of spiders?” my spider landlord asked.

“Great. Then everything is fine. My name is Selby, by the way. Let’s go take a look at the place.”

I followed Selby to the basement entrance, which was at the side of the building. She told me to follow her and then she scuttled through the gap between the door and the floor. I opted for the more traditional open-door-and-walk-through-it method.

The first few days were great. But things stopped being so great when my girlfriend Dakota came over to visit for the first time. I was excited have her over to the new place, but I didn’t want to admit right at the outset that my landlord was a spider. I figured she might not like that. I didn’t think it was a big problem—I just thought the situation was abnormal and so it might be better to ease into. I wanted to wait a little bit, wait until she said, “The apartment is perfect!” before I said, “Yeah, there’s just one thing and it’s totally cool but my landlord is a spider.”

“I squished it with my shoe.”

“I picked it up with some toilet paper and threw it in the bowl.”

“I didn’t want to flush twice,” she explained. “I hate the sound of flushing. Floosh flanananana gaga gaga GLUNK aaaahhhh,” she said, impersonating a toilet, shuddering at the end. “I hate that sound. They should make silent toilets, I’d buy one.”

“There’s something urgent I need to tell you,” I said.

I explained to her the whole deal: spider landlord, etc. She was freaked out at first, but calmed down quickly. I fished the spider out of the toilet, sprawled its lifeless body on the white tile floor and took a good look to see if I could recognize the body as Selby’s. Inconclusive.

“So how’d your landlord get transformed into a spider? Was it a curse?”

“She’s always been a spider,” I said. “I think so, at least. Either way, you shouldn’t assume those who are different than you have been cursed.”

“Whatever. Is this her?”

I got out a magnifying glass for a second look, but all I saw was the same thing but bigger.

I thought I’d bring the question right to the source: Selby my spider landlord. I didn’t want to text her “are you dead?” though, because that would just introduce more questions on her end. Instead, I did the classic fake-text-to-the-wrong-number trick.

“Hey Rodney,” my text to Selby began, “you still up for a movie tonight?”

“Wrong number,” Selby texted back. “This is Selby, your landlord.”

“That settles it,” said Dakota. “Now, let’s watch a movie or something.”

“What? No, we still have to deal with this,” I said, pointing at the dead spider lying between us on the floor.

“We did deal with it,” said Dakota, pointing at the text message.

“But what if it’s her daughter or something?”

“Spiders die all the time,” said Dakota. “Flush it and move on. I heard Inside Out is on Netflix now. We should watch Inside Out. On Netflix.”

“Yeah, Sloane told me it’s great. She said she watched the other day and bawled her eyes out.”

“I mean about not further investigating the identity of this spider.”

“That’s what you do with pee and poo, not individuals,” I replied, attempting to sound harsh.

I bent down and picked up the spider, put it on a piece of white paper, placed an inverted glass on top of it, and then lifted the whole thing to my kitchen table. Dakota said I was being overzealous. I told Dakota she needed more empathy. She told me I needed to be practical. I called her a murderer, which is not something you should say to someone you love unless you really, really mean it. We had a big fight. She said I was worthless, that my apartment was a dump, that my life was a dump, and that she wished she had squished and killed me instead of the spider. After that she stomped out of my apartment and whole life.

I felt a wave of depression hit me like that time I was at the wave pool as a kid and was sad about it. This was supposed to be a romantic night with my girlfriend in my new apartment and now it was ruined. I considered chasing after Dakota, apologizing to her and telling her that I loved her. But in that moment, I realized I didn’t love her. She killed a spider and didn’t care about it. She also didn’t care that I cared about it. And with all the things she said about me and my lifestyle, it sounded like she didn’t care about me either. I was hurt. I wanted to wallow, but I had some loose ends to tie up: I still had to find out who this dead spider on my kitchen table was. I texted my landlord, “There’s been an accident.”

Selby came over immediately. She walked right in, underneath the door. I thought that was kinda rude, but it may have been easier for her than knocking. I pointed her to the upside-down glass on my kitchen table, a museum exhibit of a dead spider. I took the glass away so Selby could have a better look.

“That’s my cousin. Her name was Louise. She was a good spider,” Selby said.

“It’s a tragedy, a real tragedy.” Selby began to wrap Louise in webbing. “I’m really going to miss her,” Selby continued sombrely, as she began to eat her cousin. “Yum,” she said, after she’d gulped the whole thing down.

“Did you just eat your cousin?” I asked.

“But aren’t you sad or anything?”

Selby rolled all eight of her eyes.

“Spiders die all the time,” she said. “If I spent my time feeling sad for all my family members who get squished, dismembered by sociopathic children, or swallowed by sleeping adults I’d never get anything done.”

“I thought that swallowing in sleep thing was a myth.”

“Tell that to my parents.”

“Was that all then? Are there any lightbulbs for me to switch for you? Any leaky faucets?”

“Well, thanks for dinner,” said Selby. And then she scuttled away, back to her apartment in the floorboards between the second and third floors.

So there I was, alone again. It turns out Dakota was right: it wasn’t a big deal that she squished the spider. The big deal was how I reacted to it. Dakota didn’t want to dwell on the incident—all she wanted was for me to spend time with her, and I exaggerated a minor incident into a relationship-ending one. Our relationship had been flushed down the toilet, and now I had to move on. But that wasn’t enough. I was upset at Dakota because she didn’t respect my life, but the truth was that I didn’t have anything worthy of respect. If I really was going to learn and grow from this experience, I had to start things new. I stepped into the toilet and crammed my feet into the hole for balance.

And I flushed myself down.

Jordan Moffatt is a writer and improviser living in Ottawa. His writing has appeared most recently in Bad Nudes, The Feathertale Review, (parenthetical), Potluck Magazine, and is forthcoming in Matrix Magazine. He was shortlisted for the 2016 Lit POP Award.