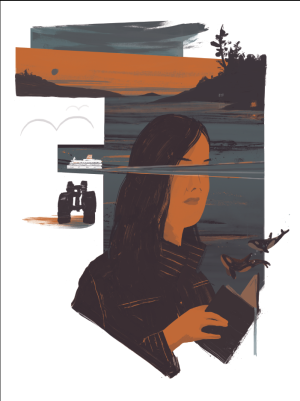 1.
What on earth did she want from him? From them? Approval? She
was embarrassed by how little she knew, or would own, of her own
motivations.

She was also too hot in her heavy wool coat, and damp, wet really,
hair like feathers stuck to her brow. Add frustrated to the list. After a
decade of intense discipline she found herself suddenly wanting to
smoke, to have random sex, or at least to have distracting fantasies
about these things: she had drifted off into trysts on the airplane, at
the hotel, in the rental car below deck.

The ferry entered Active Pass, a moment of transition she always
loved, and she stepped out onto the deck. Turbulent water churned
cutlery, dinner plates, champagne glasses and bottles tossed off of
boats, tumbling and softening them so they foamed up decades later
on beaches, common as periwinkle and sand dollars.

Shorelines sliced through the fog like cream. She scratched notes in a
hand-sized journal. Tiny illuminations like the lit cabins on the treed
shores where some old part of her still longed to live.

2.
Harlequin ducks carved in Thailand or Bangladesh lined the gift
shop shelves. Local books in racks. The clink of teapots, a cash register.
Horn blast. All the old comforts laced with their irritations. She
recalled hearing Aritha Van Herk read a story set on a ferry years ago
when she was a creative writing student at the university. The local. It
was crass in fiction. Stories were supposed to be set in New York, or
London, or at the very least, in a suspended non-descript place that
resembled the interior of an Alice Munro character.

That week someone had stolen her backpack and she found it hours
later stuffed in a garbage bin on campus with nothing but a personal
letter, her diary, and a packet of photographs taken.

That was the sort of thing that happened in Victoria.

3.
There had been a pod of whales on the previous crossing. People
stared out hopefully even after they left the strait. She stood next to
a Kurt Cobain look-a-like on his way to Botanical Beach. He was a
baker he said, lighting a cigarette for her, he liked to bake scones, she
inhaled deeply, but she did not smoke and quickly felt light-headed.

She left the baker to a rack of younger lambs and sunk into a deep
blue chair, thinking of her stolen diary. How numb she had been. Later,
when he chastised her for being so elusive, so withholding in class,
she knew he had taken it.

As painful as it had been, that loss had been a blessing. She had not yet
understood that she had been lying to herself, even in her own diary.

4.
Gulls hung ghost-like in the air. Another horn blasted. The fog refused
to lift. A woman, tall and sweet as meringue, moved past her, so slow
and heavy that she followed her up to the observation deck. Safe up
here, she thought, six stories off the water, but the plywood-covered
window reminded what a rogue wave could do. She considered pushing
the woman against the door and biting the back of her neck, but
her cell phone rang and she was momentarily jolted back to Toronto.

5.
When she lived in Victoria those many years ago, she lived in a house
on Meares. Her flat was on the second floor, a corner unit with a
large south-facing window. She used to listen to soundtracks—The
Mission, Room With a View—far too loud, and Ellen Smythe, author of
several unpublished Harlequins that needed proofreading, was often
up to complain. She was big bosomed, sixtyish (though it occurred to
her that she was probably only 40), short, hair dyed blond, face like
powdered linen, and very, very hungry. She had been there that first,
exhilarating, day, knocking quickly.

A laugh, unexpected, set off car alarms three blocks down. Her landlady
blushed at her standing in a T-shirt and turned without asking
whatever it was she wanted to ask. She went back to her bedroom and
there they were, like hungry, doting parents, urging her back to bed.

6.
He suggests they walk to Cadboro Bay, and so they do. The air was
warm, but it was windy and they were almost sideways, against it.
Everyone talked about the weather in Victoria, but no one mentioned
the persistent wind. He loped ahead of her like a much younger man,
slipping down a trail with too many logs, round and slippery as oil
drums. She was wearing the wrong coat. The wrong shoes. Staying
upright demanded all of her attention. They had two children, he said,
rolling his eyes, and yes, he had published several books since. She
had noticed, she said, waiting for a comment on her own work. He
took his binoculars out from under his jacket.

You see, he said, the Harlequins are there. And they were, chestnut
and slate, the male a slightly off Tao. They roiled in the rockiest point
in the bay; tumbling where the waves crashed and currents shifted
quickly. They mate high in swift mountain streams, he said. They nest
in crevices. From where they stood they could not hear the squeaks
and whistles of joy as they wrenched mussels and barnacles, crabs
and crustaceans.

7.
It would have been better to meet indoors, she thought. Here it was
though he was made of rubber and feathers, drifting on stilts, absolutely
free of any memory of her body, any obligation of mind. And
yet he was the one that started it with her. He, who on one of their
post workshop outings, had slipped his hand between her legs under
the table as he regaled the class with having met Carver. She found
his audacity, his control, thrilling. You have to meet my wife, he said,
brushing her breast with his arm, she will love you.

8.
He asked how she was, and he listened and nodded. He kept his body
at an angle, an elbow between them.

She knew by then that she had been one of many. Everyone knew:
each year a new affair proceeded in a startlingly similar fashion. She
had merely been a sheet of excitement, a shimmer of lubricant they
penetrated each other through. That’s what mentorship looks like for
women, someone said.

The day, drawing to a close around them, felt as turbulent as it was
the day she left well over a decade ago. She had not told anyone she
was applying to another program and this turned out to be a great
convenience.

9.
And how is Di, she asked finally. He pointed to another cluster of
ducks as if he couldn’t quite hear her, and it occurred to her that he
hadn’t told Di that she had contacted him. Triumph is overrated, she
thought. That she had moved so far along in her career, that she had a
partner, that she was happy, successful, none of this shielded her from
the stab of this omission.

He stopped suddenly, facing her directly. Were you always a lesbian,
or did you just not know at the time?

Why, she said, would that be breaking the rules? She stopped herself
from saying something cruel about how she had never cared what he
thought of her. That it had always been about his wife. That Di was
delicious, like trying to find a single strawberry in a bowl of whipped
cream. Surely he must know that.

There will be a small gathering after the reading, he said. Come. He
walked on, binoculars at the ready, sure and quiet, as if he was leaving
a trail of crumbs.

SINA QUEYRAS is the author of MxT and Autobiography of Childhood,
both from Coach House.