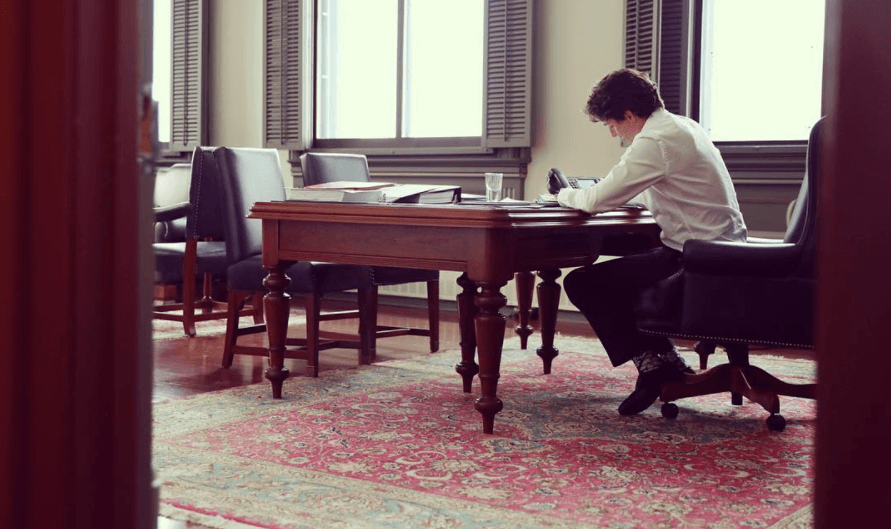 Stephen Harper didn’t hide what he thought of working people. His government waged attacks against collective bargaining. They tried to force unions to develop overly bureaucratic measures to make their finances public to non-members. They resisted and dismantled social programs that help people, even if they had few or no benefits through their work. And they oversaw changes to the Temporary Foreign Worker Program that threatened the livelihood of as many as 70,000 workers.

When he was elected in 2015, Justin Trudeau promised a new era of cooperation with workers. He has been friendly with labour leaders. He has tried to show that he can work with business and labour. He has gone to union conventions to promote his party’s agenda. His reception has been generally positive.

But in October, the honeymoon ended. While at a young workers’ conference, Trudeau faced his first, direct protest.

As we say good riddance to 2016 and look forward to 2017, Trudeau’s approach to workers will help voters gauge just how feminist, progressive, and worker friendly he really is. Will he keep his promises to working people? Here are five issues to watch for 2017.

When Harper cut door-to-door mail delivery in 2014, he sent a signal to Canadians: public services, even long-standing ones, can be eliminated. Shrouded in a discussion about modernization (even though the corporation continues to be profitable), the Conservatives used Canada Post as a proxy to wage an attack on good jobs and collective bargaining.

The Liberals promised to restore door-to-door mail delivery. They negotiated a contract with the Canadian Union of Postal Workers in December 2016, and sent the question of door-to-door delivery to a committee where Liberals members held the majority. The committee recommended expanding Canada Post’s services and agreed that daily delivery should continue. They didn’t recommend postal banking, a service that would offer Canadians basic and cheap banking services. The NDP issued its own report, criticizing the committee for this oversight.

The Canadian Union of Postal Workers has been calling for an overhaul to Canada Post for years. They envision an organization that can undercut the high costs of banking, dispense medical marijuana, and deliver food to Northern Communities, among other services.

If the Liberals are interested in sustainably transforming Canada Post, CUPW’s recommendations should be considered carefully. But their committee report suggests that they prefer to limit the scope of Canada Post’s mandate, which will surely result in more job losses, worse service and even the demise of the postal service itself. What will the Liberals ultimately decide?

The federal government is the direct employer of hundreds of thousands of workers. Due to the implementation of the Phoenix pay system, 82,000 workers have had problems with their pay, in some cases not being paid at all. More than one year after the Liberals took office, there were still 200,000 transactions that had not been completed, and 18,000 workers who still had problems with their pay.

According to the Public Works and Government Services website, as of January 11, there was still a backlog affecting 8,000 workers.

The new pay system was implemented six months into the Liberals’ term. Even though this decision was made prior to their election, the way in which they’ve handled it has been a disaster. How much longer will workers have to manage with these problems?

On October 19, the Liberals introduced legislation that would amend the Pension Benefits Standards Act, called Bill C-27. It would give employers the option to not fund employer’s contributions for pension plans. This opens the possibility for employers to reduce benefits, even retroactively.

The change would apply to Crown corporations and federal public sector employers. The Canadian Labour Congress called the legislation “a betrayal,” that “was even rejected by the Conservatives.”

Removing the legal requirement that corporations fund their pension contributions would threaten billions of dollars in pension money. That’s money that older Canadians rely on to buy food and pay for housing costs.

During the 2015 election, the Liberals rejected the NDP’s plans to create a national childcare system. Instead, they implemented individual fixes, such as offering families more money through a universal child benefit.

Of course, when there’s no childcare available, more money available for families doesn’t quite fix the problem.

In late December, a Canadian Centre for Policy Alternatives report showed that childcare costs are climbing and families are increasingly desperate. When parents can’t find childcare, their ability to hold a full-time job is threatened.

The Liberals have promised a pan-Canadian framework, but work hasn’t yet started on the framework. In 2017, this will be a critical policy area that Canadians should watch. Will the framework create enough spaces? Will there be a cap placed on fees? Will they deliver before the next election, or will the results of this work be put towards voters at the next election?

The changes to the Temporary Foreign Worker Program that were brought on by Harper’s Conservatives are only now coming to bear, and how Trudeau and his ministers reform the program will have important implications on hundreds of thousands of workers and their families.

As most of these workers fall under provincial labour jurisdiction, the big question is: will Trudeau allow more of these workers to immigrate to Canada and work here as citizens? How will they reduce exploitation?

Already, they’ve scrapped a rule that forced Temporary Foreign Workers to wait for four years to come back to Canada after having completed a four-year work period. As they campaigned to “fix” the program, ensuring that workers can find paths to permanent residency or citizenship will be critical.

Nora Loreto writes about labour issues for This.