Our July/August Third Annual Summer Reading Issue is on newsstands now! To celebrate our literary history in our 50th anniversary year, this summer we’re also re-publishing a bunch of archived poetry and fiction. This week, we present “Lee Marvin, at your Service,” a short story from our longest-serving Literary Editor Stuart Ross, published in our January/February 2013 issue. Stuart has brought many great writers to the pages of This Magazine, and we’re thrilled to feature one of his own wonderful short stories! We hope you enjoy “Lee Marvin” as much as we did and stay tuned for more great writing from the archives! 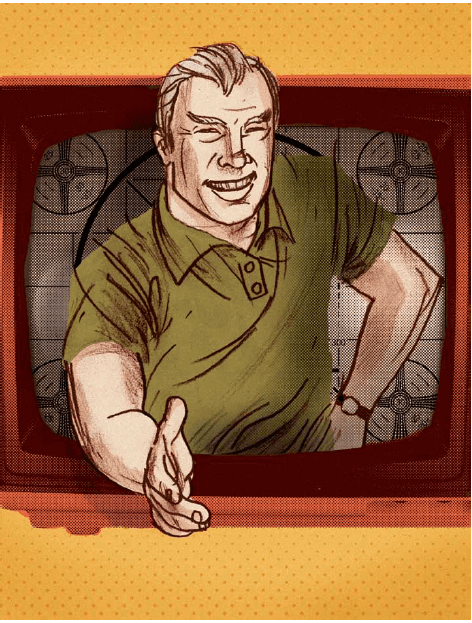 Lee Marvin, at your service

There was a time, and it feels like yesterday, but really it was an era of Cold War paranoia and black dial phones and colour-TV-as-novelty, when it seemed like everywhere you went, every corner you turned, Lee Marvin was there, ready to give you a hand.

You would flood the engine of your car, and you’d sit there in your driveway, still pumping away at the pedal, and a song by Paul Revere and the Raiders would be squeaking out of your tinny radio speaker, and there’d be a knock at your window. You’d crank the window down, that’s how you did it in those days, you’d crank your window down and peer up into the sunlight, and a tall figure would blot out the sun like there was some goddamn eclipse or something. And before you could say, “Are you Ray Walston from My Favorite Martian,” the giant silhouette with a brush cut would say, “Lee Marvin, at your service.” And within minutes, seriously, you’d be picking up your date and you’d both go five-pin bowling.

Maybe your father would die, or no, your grandmother who lived in the family room and didn’t know any English, only spoke Russian, but she made a great snack by frying up chicken fat and onions, and the whole family would sit in front of the Marvelous Invention of Colour TV and watch Laugh-In while dipping into the greasy bowl Grandma had prepared. And now she was gone, and you’ve all just come home from the funeral, and Solly says, “We’d better cover all the windows,” and Sarah says, “No, we have to take the pillows off the bed and paint Jewish stars on all the mirrors,” and Dad says, “Everyone take off your shoes and put on slippers or flip-flops.” But really, no one had ever paid attention before to what you had to do when you were sitting shiva, because it had only ever been other people’s shivas. And then there was a knock at the door, and when Mom answered, a tall blond man with muscular front teeth would thrust his head inside and say, “Lee Marvin, at your service.” And before you knew it, you’d have all the Jewish mourning customs down pat, and Lee would be leading the minyan in the Kaddish.

Same with if you were in a bank and lining up for the teller and you were confused by how to fill out the deposit slip, or if some skinny thug was robbing the bank, or if two kids in striped shirts were yelling at each other in the schoolyard, or if you were short a few pennies when you were buying a pack of cigarettes or a bottle of cream soda, or if you had trouble making one of those cardboard pinhole viewers when there was a solar eclipse — next thing you knew, before you had even begun to panic: “Lee Marvin, at your service.” That familiar square-jawed grin, the big hand reaching out to shake your own more mortal hand — “Lee Marvin, at your service” — and then he’d do his thing, it would only take a second, and everything would be better and you’d be on your way and the grilled-cheese sandwich wouldn’t even have gotten cold yet, if there was a grilled-cheese sandwich involved in the situation.

But it’s not like Lee Marvin didn’t have his own problems. Lee Marvin had plenty. Just ask Jane Fonda, or Jean Seberg, or John Cassavetes. Or, if you don’t like people whose names begin with the same letter as Jesus, ask Angie Dickinson. Anyway, this all happened so long ago, it’s like it was another lifetime. I’ve put on weight, my hair is white now, and when I get my picture taken, it always looks like I’m lying in a coffin, like when Polly, our Ukrainian cleaning woman, showed us a photograph of her husband back in the Ukraine, and he really was lying in a coffin. We caught Polly stealing some of Mom’s jewellery, and that was the end of Polly in our home. She wasn’t very good anyway — sometimes we’d find cobwebs up near the ceiling after she left.

Our next cleaning woman was Clara, and Clara was from Argentina, and she never stole anything, not even if we deliberately left something out to test her. That’s the difference between Ukrainians and Argentinians. Also, when Clara found my Playboy collection hidden under my bed, she didn’t tell my parents. She just put the magazines in order by year and month and straightened out the stack. Bruce Jay Friedman, who is a very good writer — I’ve read four of his novels — used to always write for Playboy. I always noticed his name at the top of his articles — it was such a Jewish name. It surprised me to see people with Jewish names writing in a magazine with nudie girls. My favourite Playmate was a lady from Hoboken, New Jersey. I think she’s selling real estate now.

The thing about selling real estate is you have to really love what you’re doing, because it’s only genuine enthusiasm that is going to compel someone to fork out the kind of money necessary to own their own house. And you have to be able to look at the bright side of things — you have to always find the rainbow in the goddamn bug-infested swamp. If you lose your excitement about selling real estate — like, if you were really good once but now there’s no challenge left — it’s time to do something. People who don’t think positively can’t be in the real estate business. Sure, they might be able to sell a ramshackle bungalow here and there, but they could never be really successful. They should go into a business they can be more passionate about, like owning a hardware store or testing makeup products on animals.

The best Bruce Jay Friedman novel, according to me, is Stern. The former Playmate from Hoboken, New Jersey, is Janet Lupo.

May I suggest that you schedule an appointment with a career counsellor? These are people who come in all shapes and sizes, and they can make a genuine difference in your life. They may not be able to guarantee you a job, but they can help steer you towards the kind of professional pursuit that you are qualified for, and that you would find meaningful. Something you can really get behind.

Some think that a meaningful job is one that affects a lot of people, such as coming up with an important and complex theory like Einstein did, or being a prime minister, or becoming a police officer in a bad neighbourhood who really connects with the young people and encourages them to get meaningful jobs instead of being hoodlums and layabouts. A meaningful job might only be meaningful to the person who has the job, but that is enough. Meaningfulness is not measured by quantity. Being a meaningful job means being meaningful to the person who holds the job: it gives them self-respect and a purpose in life. It might just be playing a particular chord on a pipe organ once a year on the same date. It might be laying pipe for the delivery of oil. It might be sitting on a porch in a pioneer village smoking a corncob pipe like you were from the 1840s.

Early in 1840, the first issue of the American magazine Electro-Magnetic Intelligencer was published. It appeared on January 18. On the same date, but in 1961, the lie detector was first employed in the Netherlands. Another interesting fact about the Netherlands is that one in three Dutch people belong to a sports club, plus approximately 300 castles in Holland are open to the public. These are “fun facts.” You will find many more “fun facts” sprinkled about in other stories that I have written.