January 31 2016: Over $600 was raised for the Silence is Violence Legal Defense Fund; I met the group’s founder Mandi Gray in person for the first time; it was the one-year anniversary since Gray says she was raped; the night before the first day of her ongoing trial; and my 30th birthday.

Like many women, I connected with Gray over similar experiences of trauma. When the Silence is Violence Legal Defense Fund went online in December, I thought the timing worked perfectly for a January fundraiser. 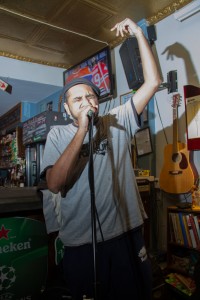 Dave’s… in Toronto was packed the Sunday night of the fundraiser. The bar’s management, all the entertainers, prize donors, photographers, and musicians replied quickly when I reached out and, without question, volunteered their time and energy to the cause. The Rough Go, Mohammad Ali, Wayne Kennedy, and Jen Unbe were the evening’s musical performances of the night and prize donors for the silent and live auctions included FloralManifesto, Dani Crosby, Sera Rootlet, Gnarly Art, Carlton Cinema, Jane Doe, and, of course, my Gender Block home, This Magazine.

Many involved with the event shared their own stories of sexual assault and/or rape and, naturally, their experiences with victim-blaming and thoughts on the rape culture that allows so many people to be hurt in these ways.

I connected with Gray over a series of well-timed coincidences this past fall. I snapped a picture of a Silence is Violence (SiV)  poster hung on a wall in the sociology department at York University in the fall as a reminder to add the group to the feminist resource directory I had recently launched, FIRE- Feminist Internet Resource Exchange. When This Magazine started researching on campus activism for an upcoming alternative university guide, I thought of SiV: feminism is kind of a big deal to me and the poster was pink, so I was attracted to the prospect of learning more.

The morning following the fundraiser I joined Gray and 40 of her supporters in court for three days. Again, experiences were shared. In spite of our relentless rape culture and a society that ignores this culture’s existence and instead turns to victim-blaming, Silence is Violence has connected victims and survivors (we all identify differently and that is OK!) nationwide, on campuses, court rooms, and in a bar on a Sunday night.