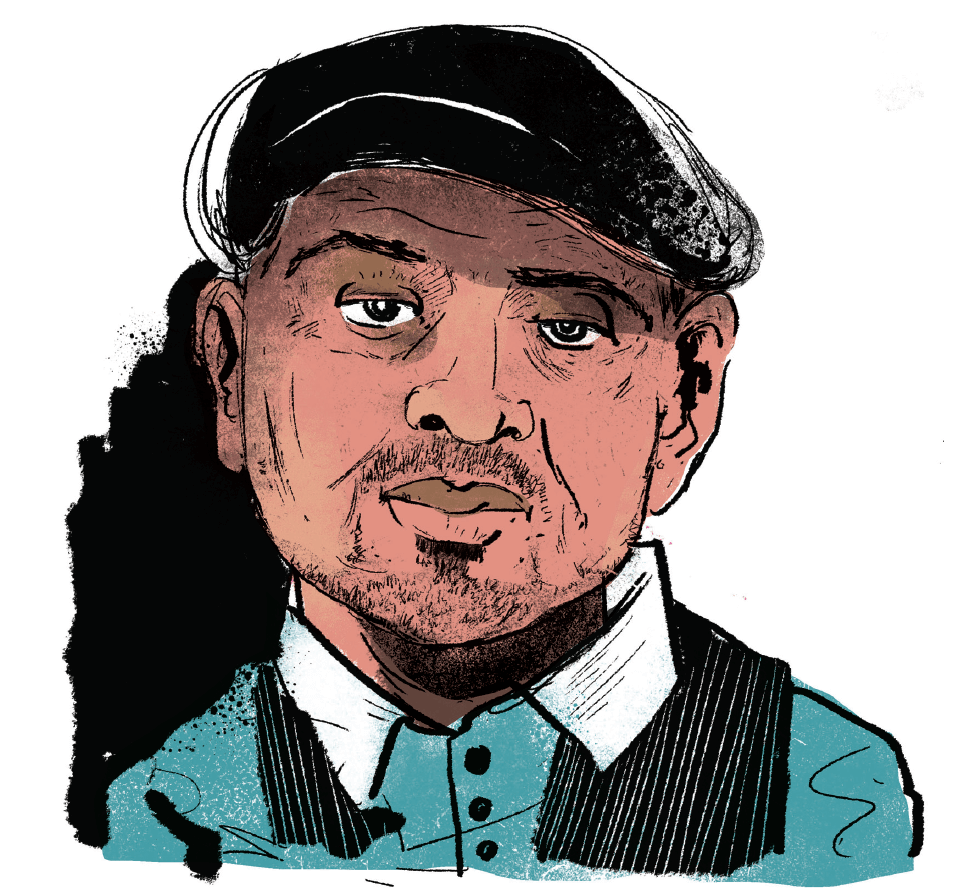 IT’S MARCH 2015 and the Toronto crowd is rallying to protest Bill C-51. There’s excitement in the air. With every new body comes a greater sense of solidarity. Speakers file on and off stage. The crowd is committed, but human: there comes a point when attention wanes and distraction takes over. The energy starts to lower. Mohammad Ali Aumeer, better known in activist circles as the “Socialist Vocalist,” is backstage. He knows the crowd needs its energy back. And he’s just the person to do it.

Aumeer has been filling notebooks with lyrics for nearly two decades. He was inspired after reading the words of Noam Chomsky and Che Guevara, among others. In fact, it was after reading Guevara’s Reminiscences of the Cuban Revolutionary War that Aumeer chose to move to Havana, Cuba, at the age of 25, where he lived on and off from 2004–2005. “We were living in post-reform Cuba,” he says. “People would be rapping in Spanish, and at the end I would come in and rap in English.” The crowd’s excitement and cheers inspired Aumeer to continue performing in Canada. He decided: “I’m going to make political music.”

Back in Toronto in 2006, while browsing the (now closed) World’s Biggest Bookstore, he spotted someone holding a copy of Chomsky’s Manufacturing Consent, a book that examines how the elite classes disregard human rights. The two started talking and, by the end of the conversation, Aumeer was invited to a War Resisters Support Campaign event. The War Resisters organization formed to help U.S. military personnel who refused to participate in the Iraq war and came to Canada seeking asylum. When Aumeer connected with the group, he saw a well-run organization with a solid PR campaign, and, more importantly, an opportunity to stir up youth engagement.

Aumeer started touring university campuses with the War Resisters, performing social justice-themed raps and talking to audience members. The team-up was engaging, he says, to the point where even the hecklers in the audience would be on-side in the end. Next, he expanded to play the wider activist circuit. Between 2007–2010 he toured Canada, from St. John’s to Vancouver, rapping about human rights and social justice issues. He gained a reputation for hyping up crowds at rallies. One day after performing at a CUPE convention in 2013, he told himself: “If I’m going to be an artist it can’t be on the sidelines, it needs to be a full-time thing.” As an activist, he helped organize the rallies, now he wanted to be the fire behind their energy.

Fellow hip hop artist Red Menace introduced Aumeer to Roshin of Notes to Self. The two were natural friends, both obsessed with rap battles, politically aware, and into Magic: The Gathering, a trading card game. The two have big plans. Their album, pending release, isn’t just about changing minds, but, as Aumeer describes it, also giving activists something to which they can relax—even if it’s more likely to awaken something revolutionary inside of his listeners. As his music evolves, it’s now less about persuading the conservative right, and more about connecting progressive voices and people.

The same outgoing personality that pushed Aumeer to approach a stranger in a book store has helped him find other opportunities, including a spot on CBCs The National with Peter Mansbridge. “Opportunities are less frequent for progressive artists. But when they come they are big,” he says. He urges independent political artists to drop everything to make these opportunities happen. Aumeer and Roshin are now building a strong international network of indie political artists. Aumeer wants to set a new standard: polished videos, like the ones he has on his YouTube channel, including “Precarious Work,” a song about organizing, student’s rights, and worker’s rights. The project also includes using the work of talented local artists. This plan involves having Son of Nun, of Firebrand Records (Ryan Harvey and Tom Morello’s label) perform, as well as setting up an Ontario tour with artists from Hamilton, Toronto, and Ottawa performing together in the three cities.

In the last two years, Aumeer has also taken on a new role as a father. He says his daughter, Ameerah, who is nearly two-years-old, forces him to take breaks from work. Before we part ways he shares some of his work. They’re words we should all hear: “This for Ameerah, my first born/This for my ancestors, I talk to ’em/This for Prashad his words of wisdom/This that karma of brown folk living … Rock Trayvon’s hoodie/Rock Malala’s hijab.”