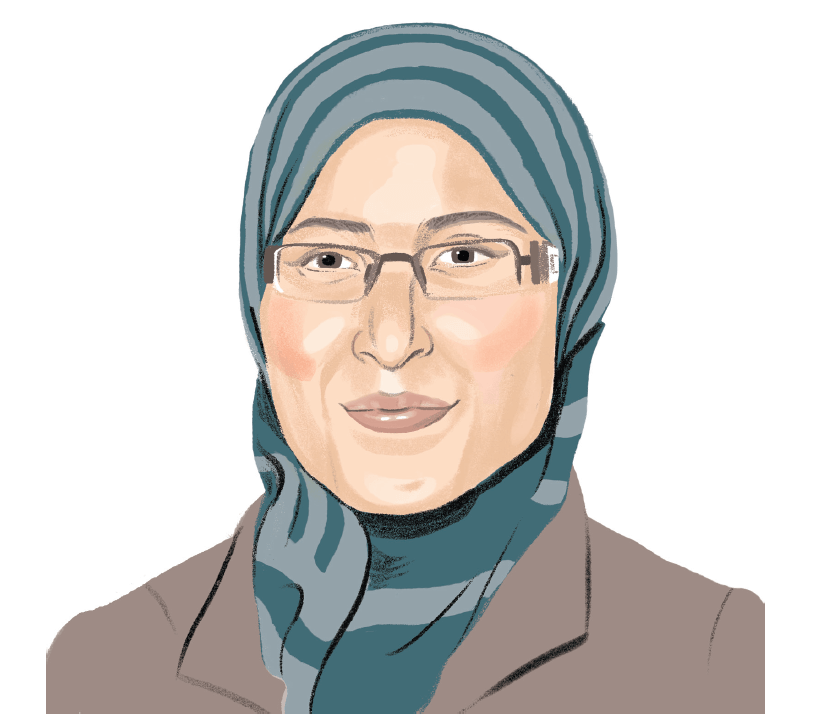 “WHY DO YOU HAVE TO WEAR THAT THING HERE?” “Why don’t you just go back to where you came from?” That these kinds of remarks are ever voiced might seem far-fetched, almost cartoonishly so, but they are actually common enough that many Muslim women in Canada who wear the hijab hear them at some point in their lives—some even routinely.

In this case, it was at a long-term care facility in Ottawa in the mid-2000s. A older man and his ailing sister followed Amira Elghawaby down the hallway, hurling xenophobic comments at her for wearing a headscarf. Elghawaby was visiting her mother, who had multiple sclerosis, something she had done for years without incident. “My mother lived at that hospital. That was like my home … I had so many happy memories in that space,” she says. “I can’t emphasize enough how hurtful it is when it is addressed to you. It really does hurt—a lot.”

A decade later, Elghawaby works at the National Council of Canadian Muslims (NCCM). It’s a non-profit dedicated to addressing human rights issues that affect Canadian Muslims, including discrimination. A small shop of two full-time employees in Ottawa and three part-timers there and elsewhere, it is the premier national agency combatting anti-Muslim sentiment in Canada. Elghawaby is NCCM’s director of communications—an extension of her earlier journalism work and interest in social justice issues. One of her main roles is to ensure that Canadian Muslims are heard from directly—especially as the spotlight increasingly focuses on this diverse community.

Much of Elghawaby’s job is about holding the press accountable—she wants the media to discuss Muslims in a way that doesn’t cast a pall of suspicion over the entire community. But with terms such as Islamic terrorism, jihadism, and Islamofascism used liberally, both politicians and the press often contribute to the growing suspicion of Muslims. As a 2012 Royal Canadian Mounted Police report “Words Make Worlds” notes, these incorrect terms “succeed only in conflating terrorism with mainstream Islam, thereby casting all Muslims as terrorists or potential terrorists.” It’s partly why hate crimes against Canada’s one million Muslims have risen even as they fall for all other religious groups. NCCM launched a hate crimes tracker in June 2015 to empower Canadian Muslims and to “name it and shame it.” Representatives from the LGBTQ, Black, Jewish, and Sikh communities turned up in solidarity at the press announcement.

That’s just the routine stuff. Then there are these incidents: “Islam is a criminal enterprise seeking to enslave the world. A Muslim who is not a terrorist is a bad Muslim,” reads one letter to the editor in the Barrie Examiner published late October 2015. NCCM responded by pointing out that “had someone said the same about Judaism, Christianity, Buddhism or any other faith, there would have been an outcry.” Elghawaby plans to follow-up further by requesting an editorial board meeting with the Examiner. Freedom of speech is important, she says, but it’s hard to imagine someone could write a letter criminalizing any other community and see it get published: “So there has to be that sensitivity.”

Beyond media outreach, part of Elghawaby’s work is building bridges between Muslims and other Canadians. A 2013 Angus Reid poll showed that 54 percent of Canadians held a negative view of Muslims, up from 46 percent in 2009. But this changes, she notes, as people actually get to know Muslims. “So it’s about increasing that contact,” she says.

It’s been a busy few years for the NCCM. Concerns about terrorism have given a license for many to express xenophobic views, keeping the group on the defensive. To offset this issue, the NCCM recently launched a Stronger Together campaign and will wrap up its 2015- 2016 Empowerment Tour in May. The respective goals, Elghawaby says, are to create civic engagement teams in every major city that can advocate key issues like amending or repealing Bill C-51, and to offer training to community activists on tackling anti-Muslim sentiment. (NCCM already provides guides and kits for educators, employers, and journalists. More are in the pipeline.)

To be sure, the official tone toward Muslims has changed for the better since the Harper Conservatives were voted out on October 19. “What a difference a day makes,” wrote Elghawaby, for the Globe and Mail. Yet assaults on Canadian Muslims have since risen—one mosque in Peterborough, Ont. was set aflame the day after the Paris attacks on November 13. Prime Minister Justin Trudeau has said he was “deeply disturbed” by the arson and has urged Canadians not to turn to “acts of hatred and racism.”

For her part, Elghawaby says now is not the time to take a “breather.” She plans to continue holding the media (and public officials) to account, and to step up NCCM’s efforts to build a grassroots network of activists and civic leaders. In the end, her goal is a basic one: to ensure that anti-Muslim sentiment, she says, “is seen to be on the same level as all other hatreds.”

ADAM RASMI is a journalist. He was previously based in Beirut, Lebanon (2012-2015) and his writing has appeared in the Economist, Foreign Affairs, London Review of Books, VICE, and other online and print media.