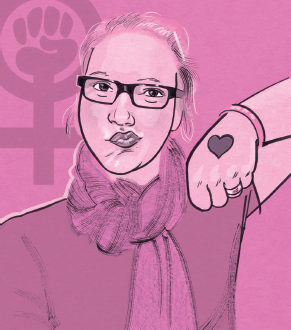 ATTENTION SEEKING FEMINIST. Extraordinary Franco-Ontarian. Award-winning feminist buzzkill. Both good and bad, Julie Lalonde has heard it all—this is how she knows her feminist action is effective. “The resistance we face to our work is real and palpable,” says Lalonde. “To be a lifelong feminist requires an incredible amount of tenacity.”

It’s this kind of drive that helped Lalonde co-create a coalition that pushed for a university-funded campus sexual assault centre at Carleton, a six-year battle that ended successfully in 2007. “Nobody was talking openly about sexual assault on campus then,” she says. “Not like they are today. We were really alone and pushing up against some huge obstacles.” Lalonde has continued to push through those obstacles since: In 2008, she helped get women and gender studies classes into Ontario’s high school curriculum; in 2011 she launched the Hollaback! movement in Canada; and in 2012 she founded the pro-abortion rights group The Radical Handmaids, a satirical street theatre group that raises awareness on how the government polices
women’s reproductive rights.

I’m not surprised when, right away, Lalonde confesses: “I’m juggling a lot right now.” The 29-year-old is also a freelance writer and has a part-time job supporting rural survivors of sexual violence through the Sexual Assault Support Centre of Ottawa. She regularly discusses sexual violence in Ontario schools and talks feminism through Ottawa radio airwaves on CHUO 89.1FM with her show The Third Wave. It’s not always easy, she says, especially considering the current attacks against outspoken feminists, particularly through social media. “I get a lot of backlash, threats and harassment,” says Lalonde. “But I can get up in the morning and keep going because I have a track record of getting the job done.”

Lalonde attributes a lot of this to her time spent at Carleton while earning her masters in Canadian studies and women’s studies. As the first in her family to attend university, she was expected by her family to use the privilege afforded by a post-secondary education to better the world: “My parents busted their humps to be able to put me through school. I am eternally grateful for their sacrifices and definitely feel the weight of the responsibility that comes with it.”

Lalonde grew up listening to the Spice Girls and Alanis Morissette. In high school the Catholic school dress code served as what Lalonde describes as an awakening to how brutally sexist the rules were, forcing girls to have no option, other than skirts—even in a Northern Ontario climate. It was around this age she read and re-read Margaret Atwood’s The Handmaid’s Tale. An ex-nun who, “clearly saw my budding feminism” gave her the dystopian novel. Growing up Catholic, Lalonde
once toyed with the idea of becoming a nun—it was the only career she knew of where she could help better the world. But, “I hated religion and going to church, so quickly realized, being a nun wasn’t it.” Her a-ha! moment arrived during class discussions in her women’s studies classrooms at university.

Today, Lalonde manages the sexual violence prevention campaign, draw-the-line.ca, through which she gives Ontario-wide presentations regarding sexual violence and bystander intervention. Knowing students are not only engaged with the issue of sexual violence but want to know more on how to prevent it, Lalonde hopes this information can be valued in the education system as much as calculus or reading CanLit. In addition to schools, Lalonde also speaks on military bases and even at Parliament Hill.

The activist is passionate about her work and making sure its message is received by the masses, while also making it accessible to everyone. And though she’s faced backlash, her work has also been positively received. In 2013, she was presented with the Governor General’s Award for her work to end sexual violence against women—unaware she was even nominated until after she got a call from her former colleagues at Status of Women to let her know she won. In 2011, she won a Femmy Award, given by peers in the Ottawa Gatineau area, for her work fighting violence against women.

Lalonde isn’t worried about people identifying as feminists. Rather, she encourages people to do feminist work and live by a feminist politic: “bell hooks nailed it when she declared that feminism is for everybody.”