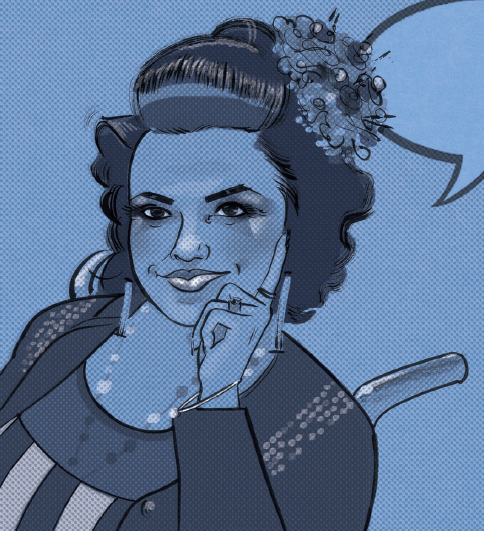 WORDS HAVE CONNECTED THE DOTS of Jewel Kats’ life, keeping her company throughout. She describes writing as a passion that churns from within and comes out by the ink of her pen. An award-winning children’s author and comic strip writer, Kats has penned titles such as Cinderella’s Magical Wheelchair and What Do You Use to Help Your Body? Her goal is to create identifiable and relatable main characters for children living with disabilities. As an advocate, Kats is also the self-titled Original DitzAbled Princess—a reference to her autobiographical comic strip series. “I’ve been affectionately called ‘ditzy’ more than once, twice, thrice,” she says. “I decided to empower this adjective, and stuck ‘abled’ behind it.”

Knowing her close connection with books and reading, I was surprised to learn Kats didn’t understand a word of English in kindergarten. Living in an inter-generational home, she primarily spoke Hindi and Punjabi. Luckily, she says, her love for picture books saved the day. “I would stare and stare at the text and illustrations of picture books until my eyes were ready to pop out,” she says. She was especially enchanted with the illustrations in The Berenstain Bears and Dr. Seuss. “I started piecing English together by recognizing words that I was learning in ESL through the recorded narrative of stories,” she adds, “and began associating words with drawn items—regardless of whatever artistic medium was used.”

As the words accompanying the artwork made more sense, Kats became a bonafide bookworm. By age nine, she was already disappointed with school’s scant book offerings. Itching for a good read to cozy up to on a particularly chilly winter night, Kats convinced her mom to drive her and her younger sister to the bookstore at their local mall in Scarborough, Ont. En route another vehicle crashed into Kats’ passenger door and drove off. “Eventually, someone returned,” she says, “Until this day, we don’t know if it was the same driver or not.”

When the ambulance later arrived, Kats didn’t feel anything wrong—at first. While her mom and sister were largely unharmed, Kats soon realized she couldn’t move her right leg. She was an inpatient at Toronto’s SickKids Hospital for six weeks before being sent home in a body cast. Despite being stuck in bed and having to lay flat on her back, Kats found a familiar escape in reading, particularly Archie Comics. Yet, though the characters of Riverdale would keep her entertained for hours—“I was always drawn to the colourful illustrations and guaranteed punch lines”—she could never fully relate to them. Everyone, she says, was able-bodied and that no longer included her.

As it turned out, many years later, Kats herself would get a chance to fix this. It was like something out of storybook. As an adult Kats had graduated from avid reader to accomplished graphic novelist with the DitzAbled Princess series. While exhibiting her work at Toronto’s Fan Expo in 2013, fate interceded and Kats met one of the Archie Comics’ powers-that-be: Dan Parent, who is easily one of the series’ most prolific writers/artists. “I was pumped beyond belief,” Kats says. “After all, I had a bone to pick with him.” Wheeling up to her once idol gone peer, in her trademark hot pink wheelchair, Kats looked him square in the eye: “Why isn’t there a character with a disability in Riverdale? How is that even possible?”

Parent didn’t have an answer, but he invited Kats to keep in touch, which she did. Like many, Parent was inspired by Kats’ passion and advocacy—so much so that shortly after their meeting a new girl came to Riverdale. Harper Lodge, an advice columnist who uses the pen name Jewel and has a punky fashion style that doesn’t stop at her hot pink wheelchair. The character was on the cover of the comic’s 656th issue, her debut.

This is only one example of Kats acting as inspiration; there are many. At a two-day event at Buffalo, New York’s Museum of disABILITY History, which was held in Kats’ honour, fans of her work told her that she made them feel cool. It took her aback—she’d never even thought a disability could take away from someone’s cool factor. Coming from Kats, this seems genuine. After all, when Kats wanted a character to identify with in Archie Comics, she made it happen, and when she wanted a word search book full of fashion and glamour, she created it. The aspiring fashion designer sees her wheelchair as an opportunity to showcase the highest, sparkle-covered platform shoes, and makes sure all children of all physical abilities can relate with fairy
tales. Her confidence is as contagious as her smile. She is a woman who doesn’t self-impose limits.

“People have found inspiration from my real-life story,” she says. “I’ve personally triumphed over a childhood car accident, sexual abuse in my teens, anorexia, depression and divorce in my adult years. I’ve never let anything or anyone stop me. I refuse to give up.” Kats believes kids pick up on her upbeat vibe and assurance there is always a light at the end of a tunnel, if not a rainbow. “One reader read Cinderella’s Magical Wheelchair so many times that she had to tape the pages together!”

Now living in Etobicoke, Ont., Kats sees all the positive feedback and attention as an illustration to how much her work is needed: “Some call my work innovative, others have called me a pioneer; I beg to differ. People with disabilities have existed since the beginning of time. We were here yesterday. We are here today. We will be here tomorrow. I just happen to be recording stories that need to be told.”