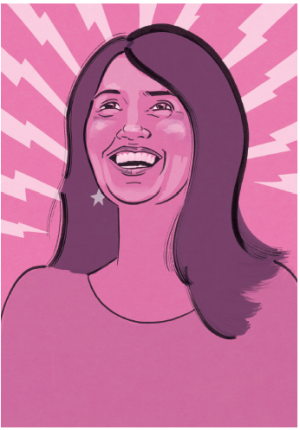 No matter what she does, anti-violence activist Farrah Khan is all about collaboration and women’s empowerment

ON INTERNATIONAL WOMEN’S DAY IN 2008 there was a massive blizzard. Thinking the self-defense workshop she was scheduled to facilitate would be cancelled, Farrah Khan curled up in a blanket, hoping to pass the snowy night with some cartoon watching. The group of South Asian women and children she was supposed to teach, however, were not about to let a ferocious blizzard stop them. They called Khan to let her know the workshop was still on. She trekked to the Toronto-based mosque expecting a small group, but the room was packed. When Khan asked if they wanted their children to leave since she would be talking
about violence against women, one woman just shook her head: “They need to listen to this.”

What was supposed to be a one hour self-defense workshop turned into a three hour extravaganza, with grandmothers practicing how to get out of a wrist hold alongside their granddaughters and everyone shouting their loudest “NO!”

This story is what Khan’s work is all about: women empowering other women. The 35-year-old is currently a violence against women counselor at the Toronto-based Barbra Schlifer Commemorative Clinic and the coordinator of Outburst!, a movement of young Muslim women against gendered violence. But her activism started long before adulthood.

Born in Scarborough, Ont., then moving to Burlington at around age six after her parents divorced, and then finally to Toronto at 19, Khan spent most of her adolescence in a generally homogenous, mostly white environment. Her father is a South Asian Muslim and her mother, a Dutch Christian; still, even with her light skin, Khan stood out.

By Grade 6, she was reading about environmental activism, listening to political hardcore rock music, and reading a book called The Fragile Flag by Jane Langton. It’s about a young girl who marches to Washington for nuclear disarmament. “As a racialized Muslim person coming of age in a Catholic school that was made-up of majority white students,” Khan says, “how could I not notice injustice around me?”

As an outspoken survivor of child sexual abuse, Khan’s activism was a way of coping with and understanding the traumas and violence in her own life. When she was 12, she first told her family and a teacher at school about what was happening, as well as calling the Children’s Aid Society, which she says did nothing. So she decided to take matters into her own hands.

At 16, she began campaigning to raise awareness against sexual violence. Khan says many people assumed the person who had abused her was on the Muslim side of her family—playing into the Islamophobic perceptions of Muslim men. In actuality, it was her Dutch Christian maternal grandfather. At indie rock shows, Khan would take to the stage and speak to crowds of young people, sharing her own story to bring light to the many stories of sexual violence happening to women everywhere.

“From being bullied for having facial hair, called a Paki, to seeing our mosque be attacked or my own personal experiences of violence in the home by my maternal grandfather,” says Khan, “there was never a question that I had to address violence in many of its forms.”

Khan is especially dedicated to addressing violence within the South Asian and Muslim community. As a self-identified Muslim feminist, she seeks to learn from young Muslim women and hear their stories. The common Western narrative is that of the oppressed Muslim woman, unaware of her rights. But Khan shatters that myth. “Many Muslim women are exhausted of being asked ‘How do you reconcile being Muslim and x?’ as if the religion is rigid, static and can be our only social location,” says Khan. “There are many ways to be Muslim as there is to be feminist.”

As a queer Muslim woman, Khan adds, she’s consistently asked how she can be all she is, as if people like her are mythical creatures, like unicorns. That’s obviously not the case, says Khan, adding there are many queer feminist Muslims. She co-facilitates a yoga program for queer and trans Muslim youth, for instance, and has seen how many young people are surprised to see that they’re not alone in how they identify.

Along with her job as a counselor, coordinator of Outburst!, and co-facilitator of a yoga program, Khan also engages in different artistic projects like HEARTBEATS: The Izzat Project, a graphic novel by various South Asian women about persevering through violence. She also co-founded AQSAzine, a series of grassroots zine publications inspired by the disappointing media coverage of the 2007 Aqsa Parvez case.

There is simply no typical day for Farrah Khan. Khan’s job is more of a lifestyle based on her ideologies as an intersectional feminist: from counseling survivors to fighting for a survivor of sexual assault’s right to wear a niqab while testifying in court to creating short films and prose.

Despite all her accomplishments, however, Khan insists she is not a leader of a movement. For her, activism is about being collaborative, working with and learning from one another. Toronto-based artist Vivek Shraya sees that collaborative aspect in Farrah. “What is particularly unique about Farrah is that is she isn’t motivated by celebrity but rather community,” says Shraya. “In the time I have known her, she has been primarily dedicated to a myriad of community projects to ensure that other marginalized voices are heard and other stories are shared.”

I see this in Khan, too. For her, there is no perfect survivor, or perfect activist leader; only groups of women who work together and learn from each other. Later, during our interview, when I ask her what advice she would give young girls of colour, she responds with a smile: “I think it’s what they tell me.”