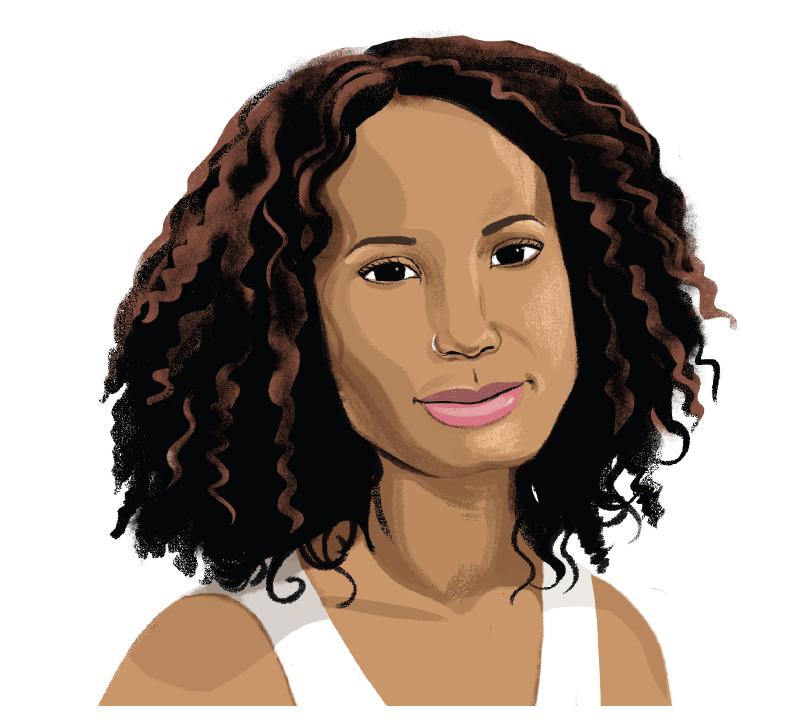 YOU DON’T EXPECT the word “amazing” to come out of someone’s mouth so often when they speak about difficult issues every day. Splitting her time between New York and Toronto, Kim Katrin Milan is an an educator, writer, artist, yoga instructor, and activist. She does so much that a casual viewer would be forgiven for thinking her website is about a collective group, not one person. But Milan does it all herself—and with a positive attitude. All her work is purposefully connected: when speaking about social justice with one community, for instance, she may spend the first half of the workshop doing yoga. Everything she does covers the same themes of activism, leadership, equity, and justice.

These themes have always been part of Milan’s life. She intentionally surrounds herself with diversity. Her work itself allows her to be good to the people in her life. Take her studies in transgender issues, for example, says Milan. Her husband, Tiq, a writer and activist, is also a transgender man—Kim says her work allows her “to be a better partner and a better support” for him. Milan speaks about her community often, but what she really means is communities, plural: the LGBTQ community, the feminist community, the Black community—she wants them all to have support and equality.

When Milan was 17, she worked at Transition, an organization for students leaving high school. It was then that she realized how many people need support. Later, in her early 20s, she launched the People Project with Natalyn Tremblay, an independent artist whose work explores identity. The organization provides alternative education, mostly in Toronto, to various communities and uses art to help those communities speak about difficult subjects in creative ways. In 2015, it launched the Pride Community Mural Project and invited queer and trans newcomers, immigrants, refugees, and non-status people to contribute to the mural, showcasing the diverse challenges of those who are new to the city.

Independently, Milan runs workshops all over North America. People and organizations reach out to her when they want to speak about difficult subjects, like racism and sexism. She recently ran a workshop at McMaster University with her husband on the politicsof desire and consent. She likes to open each workshop by speaking broadly about a subject (How do we work across difference?) before narrowing her focus to specifically address her audience (What are some examples of ways people are changing the world?). Often, she’ll look at a specific social or political culture, such as rape culture, and eventually build toward breaking down systems of oppression on a smaller scale—and confronting how to “interrupt those systems.”

After her recent workshop with Tiq, a 17-year old boy approached Milan to admit his realization that sexism played a big role in his cultural background. Listening to her, he had decided to talk to other men and challenge rape culture. This is one of the many times Milan has seen her work make a difference. She wants the people she speaks with to know that they can affect change, even on a small scale. She still keeps in touch with the student and says he kept his word to open conversations with other men.

For Milan, it’s important that she continue to connect with youth—no matter how big her work or her profile become. She wants “that 16-year-old gay boy in Ohio who sends me a message to still feel like he can” and “that young girl in Indonesia who is queer and just coming out to still send me a tweet and know that I will hit her back and be like: ‘I got you.’”
She speaks excitedly about her part ownership of the Glad Day Bookshop, the oldest LGBTQ bookstore in the world, adding that she is the daughter of a librarian. She is currently working on her own book, which she thinks will help take her social justice work to a new level.

Creativity is the string that runs through everything Milan does. It especially shows through in the art and performance shows she curates—like with “Fan the Flames: Queer Positions in Photography,” which was at the AGO in 2014. She wants to educate people, but in an artistic way. “It’s like people don’t know that they’re learning things but they really are,” she laughs, “and they have a really beautiful experience at the same time.” This year at Pride in Toronto, Milan hosted the Cipher Cabaret with the Buddies in Bad Times Theatre. They used fast-paced presentations on the topics of queer culture through theatre and technology to “spark some conversations and connection” and to “re/define queerness for the 21st century.”

When asked how she does it all, she responds using hummingbirds as an analogy; Milan has them tattooed on her wrist. When she was young, she had conversations with her grandmother about the way the birds flap their tiny wings so hard that at the end of the day “they almost have a heart attack, they are going so intensely—but that’s just how they’re made up.” She is, she believes, the type of person who excels by doing many different things. She adds that she loves the people she works with and doesn’t look at it as a job. To her, it is a calling.

Still, she’s incredibly busy. During one week, she did a TEDx Talk in London, Ont., then flew to New York for the Out100 Awards, then held meetings with new colleagues, and finally did a workshop on social entrepreneurship and women’s leadership. “Every day,” she says, “is profoundly different.” But it is all part of her lived experience.