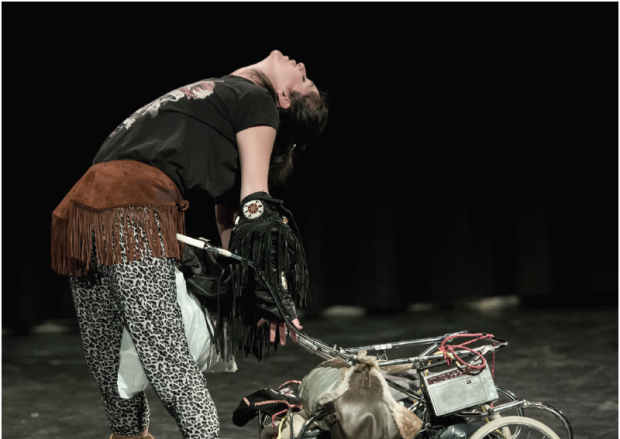 As calls for a public inquiry into the many cases of missing and murdered aboriginal women in Canada go unheard by the federal government, Montreal choreographer Lara Kramer’s most recent piece, titled NGS (“Native Girl Syndrome”), could not be more timely.

“Native Girl Syndrome” references a term Kramer came across as she researched her first dance piece on residential schools (a compulsory education system notorious for its abuse and assimilation of aboriginal children in Canada). The term refers to the likelihood of aboriginal girls who, upon leaving residential school, enter abusive relationships or prostitution. Too often,  these women also end up on the streets or in jail. “I thought the name was really potent,” says Kramer, “so I held on to it. It really helped shape the piece.”

NGS explores themes of addiction, cultural disorientation, and alienation, all in relation to the Canadian aboriginal experience. Performed by Karina Iraola and Angie Cheng, it unfolds against a backdrop of street and urban culture. Kramer says the initial inspiration for the work was her grandmother, who moved  from her remote community of Lac Seul in northwestern Ontario to live on the city streets in Winnipeg.

The piece is not, however, a depiction of the one specific story of her grandmother, adds Kramer. Rather, NGS offers comment on street life, the addiction of two women—and something larger.  Kramer’s characters have a history. “NGS looks at the aftermath of cultural genocide in Canada, the whitewashing of native people in this country and its effects,” Kramer says, “When I see the vicious cycle of addiction and prostitution of First Nations women, I feel it’s part of something bigger.”

Since it was first performed last year, NGS has toured to Montreal, Vancouver, and Edmonton, among other cities. Kramer has designed the piece to be accessible to an audience beyond contemporary dance enthusiasts—she straddles the line between dance and theatre to be as realistic as possible. No background in dance is required to understand the themes and messages.

In this regard, NGS is characteristic of Kramer’s approach to movement and the body. She didn’t want to use the body as an abstract form, says Kramer. “I wanted to go from a realistic approach,” she adds, “so a lot of my approach to the body is giving the performer time to investigate the environment.”

Although Kramer’s roots, ancestors and much of her family are from the Lac Seul First Nation community, she was born in London, Ont. She has been dancing since she was three years old, eventually moving to Montreal, Que., to study dance creation at Concordia University, graduating in 2008. In 2012, she founded her company, Lara Kramer Danse, to support the research, creation and production of her work and community projects, such as offering school-age children an opportunity to connect with theatre and dance. Her work has become more politically charged with time and now focuses around human rights issues affecting aboriginals in Canada, which earned her recognition as a human rights advocate from the Montreal Holocaust Memorial Centre.

Next spring, Kramer will start on the creation of a piece titled Tame, which deals with the themes of restraint on self-expression and the boundaries between normalcy and creative expression, which she expects to be ready for fall 2015. Although no performances of NGS are scheduled at the moment, Kramer is planning some for the coming months, notably in the U.S.