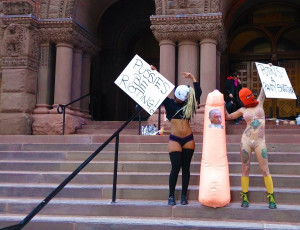 This past Saturday, February 22, anyone passing by Old City Hall in downtown Toronto would have noticed two ladies in nothing but their skivvies and balaclavas a-la-Pussy-Riot. The choice in wardrobe wardrobe was a nod to the legal restrictions our sisters in Russia will be facing—lace panties will no longer be an option as of July 1. Standing outside on a winter’s afternoon— this winter being quite possibly the second coldest in 25 years—was an intentional painful part of this performance arts demonstration.

“This isn’t a protest, where we are being aggressive and pushing our views onto people,” explains Jazmine Carr, half of the performing duo. “This is performance art, to make people stop and ask why we are doing this.”

Women’s bodies have long been cause awareness tools; FEMEN’s “sextremism” is a recent example, as is Toronto’s SlutWalk. Whether one is in the camp that these methods show that women are reclaiming their bodies, or are of the belief that the message is lost through women flaunting their bods, it is known that the woman’s body is a guaranteed attention-grabber.

Lace 4 the Race! Was organized by the self-identified Nerdy Stripper, a.k.a. Twiggy. “I wanted to continue the conversation on what is happening to our brothers and sisters in Russia,” Twiggy says, referencing what the Facebook event page describes as, “Putin’s anti-gay, anti-speech, anti-lace panties atrocity to human rights.” The message was, “Injustice anywhere is injustice everywhere.”

A handful of photographers joined the event, while many a passerby stopped to snap their own shots or ask the gals what they were up to, including a pair of Toronto police officers who seemed to be genuinely concerned for the ladies’ well-being—the temperature outdoors being below zero degrees and all. “I personally think the event went well,” says Twiggy. “I was asking a lot [people to show up in underwear], it was -8 C out.”

After a few whisky shots, and some dancing to lady-vocal tunes such as The Distillers, both performers were warm as they braved through the early afternoon.