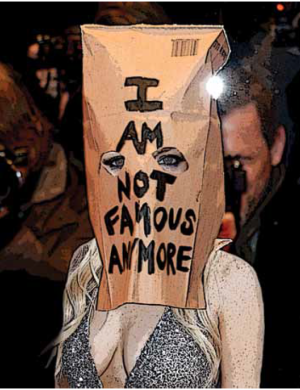 Charlie Sheen took thinking outside the bun to a whole new level in July when he drunkenly wandered around a Taco Bell drive thru greeting fellow fast food visitors with “Sorry I am so fucking hammered.” Video of the incident soon made the rounds and the winning warlock was once again making headlines. As it did with the actor’s well-publicized 2011 meltdown, media covered Sheen’s bad behaviour like it was a sitcom—wondering what hilarity and hijinks he would get up to next. Then and now, his substance abuse problems, anti-Semitism, and responsibility for making #winning happen were largely swept under the rug. Little mention was made of his history of violence against
women or his lacklustre parenting record. Instead, Sheen landed a 2012 Rolling Stone cover and made several prime time appearances. He earned reported $1.8 million (U.S.) per episode of Two and a Half Men.

It doesn’t take long to see the double standard when it comes to celebrity meltdowns: Compare coverage of Sheen’s meltdown to that of Drake-lover Amanda Bynes or an umbrella-wielding Britney Spears. At the same time Sheen was gracing the cover of Rolling Stone, Lindsay Lohan appeared on the cover of Vanity Fair in a piece that painstakingly detailed Lohan’s substance abuse issues and legal troubles. It also made frequent reference to her haggard appearance and questioned whether she would ever, ever get her once-promising career back on track. The verdict: no. Sheen #winning. Lohan #tragic.

For bad boys like Sheen being bad is good for business. Not so much for Lohan. Her last film The Canyons was largely panned before it even hit theatres. Reviewers seemed unable to separate the Lohan they saw on the big screen with the Lohan they saw on the TMZ small screen. Lohan is definitely not the worst thing about The Canyons, but almost every review focussed on her performance and never missed an opportunity to refer to her as “embattled actress Lindsay Lohan” or “troubled starlet Lindsay Lohan.” Chris Brown is always just Chris Brown not “Rihanna beater Chris Brown” or “violent misogynist Chris Brown” or “serial douchebag Chris Brown.”

And then there’s Shia LaBeouf. Where do we even start? If you’re just joining the LaBeouf crazy train already in progress: he’s been arrested for disturbing a theatre performance (he didn’t care much for Cabaret); chased a homeless men around Times Square; plagiarized people; punched people; and just generally behaved bizarrely. He announced his retirement from acting—how very 2010 Joaquin Phoenix of him—and then appeared at a film festival sporting a paper bag over his head with “I’m Not Famous Anymore” scrawled on it. It turns out this was all part of a performance art piece called #IAMSORRY. Media coverage of the piece focussed on LaBeouf’s eccentricity and his valuable contribution to the dialogue around performance art. One media outlet even gathered a panel of performance artists to discuss LaBeouf’s work with one going so far as to say: “He’s starting a broad cultural discussion that needs to be had.”

Following his recent booze-fuelled NYC meltdown, the media speculated on whether LaBeouf would head to rehab. He was photographed carrying an AA book which was enough to satisfy bloggers who didn’t question whether LaBeouf was really serious about recovery or if the book was just a PR prop. There was mention of his mental state, but not nearly the coverage of say a 2007 head-shaving Spears. The consensus was that LaBeouf ’s career would recover—just maybe not as a theatre reviewer. Compare this to the seemingly endless column inches devoted to whether Lohan’s career will ever bounce back and speculation that the mean girl now uses her talent to trade blowies for blow.

Media rarely commented on LaBeouf’s appearance, despite the fact that disturbia could be used to refer to one of his films, as well as his approach to personal hygiene. Media coverage of Bynes’ meltdown focused largely on her physical appearance, commenting on what she wore and how much her appearance had changed—and not in a good way. The media regularly updates us on Sheen, while Bynes has received little post-meltdown coverage. Redemption stories
only get coverage when there’s a male protagonist. And while the Bynes story has a happy ending—post rehab she is doing better and has not once asked Drake to murder her vagina—that’s not always the case. If Lohan or Bynes were to die, they would get a media circus of Whitney Houston proportions, not the respectful coverage afforded Philip Seymour Hoffman or Heath Ledger.

I hope it doesn’t come to that, and that Lohan’s actually been punking us all this time. Soon she’ll announce it’s all been one big performance art piece. If she did, the media would no doubt accuse her of stealing LaBeouf’s paper bag and he’d be arrested for disrupting her show.

Lisa Whittington-Hill is the publisher of This Magazine, and like
Shia, she doesn’t care much for Cabaret.