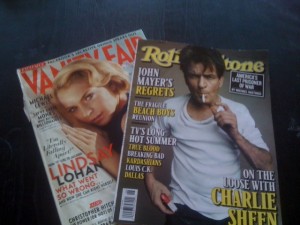 Oh god, not this joker again. These are the first words that enter my head when I see the new issue of Rolling Stone on the newsstand. The cover features a haggard Charlie Sheen. He looks like a cross between a chain-smoking bobble head and a contestant vying for first place in a Keith Richards look-alike contest. It’s certainly not pretty.

The story promises me “a week on the edge with Hollywood’s last wild man.” Haven’t we already been on the edge with this guy? For what felt like way, way longer than a week? Who can forget the wild man and all his tiger blood and torpedos of truth and goddesses and winning. Was he back? Please, no.

The story starts out with a lovely anecdote about Sheen drinking and hitting on a girl who previously auditioned for the role of his 15-year-old daughter on his new show. The classy train continues on to the station from there. The story updates us on what Sheen’s been doing since his much publicized warlock-themed meltdown in 2011, which started with Sheen taking on CBS and ended with him setting a Guinness world record for Twitter followers, and negotiating merchandising and licensing deals before embarking on a concert tour.

The Rolling Stone article doesn’t do Sheen an injustice, in fact quite the opposite. It mentions his failure to get a “conventional grip on his personal life” and downplays his many violent attacks on women. He’s referred to as a “ruthless negotiator” whose actions could be considered “heroic.” Someone who has never made excuses for what he’s doing. Seriously, Rolling Stone? The magazine even goes so far as to credit his crazy catch phrases like “tiger blood” and “warlock” to his love of films like Apocalypse Now and Jaws. Wait, he’s not crazy! He’s just a lover of film.

But it seems Rolling Stone couldn’t build their summer douche bag special issue around Sheen alone so they also included an interview where we get to go deep with John Mayer and his regrets. Referring to ex Jessica Simpson as “sexual napalm,” making really racist comments, breaking Taylor Swift’s heart, unleashing “Your Body is a Wonderland” on an unsuspecting world; it seems there’s a lot for Mayer to apologize for. Not to worry, Rolling Stone gives him ample column inches to apologize and talk about what a changed man he is.

The interview left me with the sense that I should feel sorry for Mayer and his shutdown Twitter account. So misunderstood. So remorseful. So changed. I half expected to turn the page and find a piece celebrating the wonder that is Chris Brown. Oh wait, that’s what the Grammys are for.

It’s certainly not news that there’s a double standard, especially in Hollywood, when it comes to men and women behaving badly. The same week the Rolling Stone issue hit newsstands Lindsay Lohan was all over the media again for crashing her car, allegedly attempting to cover up crashing her car, and for paramedics being called to her hotel room when it was feared she was unconscious. She was really just asleep and didn’t hear people knocking on her hotel room door. Thank god that in real life paramedics don’t show up every time someone hits the snooze button a few too many times. If that were the case, paramedics would be at my house every morning.

Was she unconscious from drugs? How long until she drops dead? Will she ever get her career back? Surely she can’t think a Lifetime movie about Elizabeth Taylor is going to resurrect her career? What happened to the cute girl from Mean Girls? What a mess Lohan is! How many different ways can we find to talk about what a mess Lohan is? It was the usual TMZ-style reporting which might as well have been sponsored by the Lindsay Lohan Celebrity Death Watch Commemorative Calendar.

When Sheen goes off the rails (cocaine or otherwise) he’s a rock star who is speaking the truth and sticking it to that evil Hollywood machine—the same machine that made him the highest paid sitcom actor for wearing ugly bowling shirts and playing a really, really, really thinly veiled version of himself.

When Lohan goes off the rails (cocaine or otherwise) she’s the little girl lost, the, pardon my French, fuck up, with no hope of ever getting her life or her career back on track.

The media delights in watching Lohan fall further and further—and helping her to do so—without ever giving her the same shot at redemption that a Sheen or a Mayer get. In October 2010 Vanity Fair ran a cover story on Lindsay Lohan—entitled “Adrift.” Nine months later they ran a profile on Charlie Sheen—entitled “Charlie Sheen’s War.” The Sheen story was newsworthy for several reasons, one of which being that Sheen wanted to be paid a million dollars and have final story approval. He didn’t get either, but he really didn’t need approval because he doesn’t come across all that bad in the piece. Sure it talks about his love of porn stars, his 1998 cocaine overdose and his role in the Heidi Fleiss trial, but it also talks about how he “redefined the internet,” how he helped actor Tom Sizemore with his addiction and manages to never delve too deep into Sheen’s history of misogyny and violence against women. Let’s not forget this is the man who once threatened to put his wife’s head in a box and send it to her mother. Oh, that zany Charlie! What antics!

Compare this to the Lohan cover story which spends the opening paragraphs describing how crappy Lohan looks before descending into questions of “what went wrong?” and “is it too late?” Again and again in the piece Lohan has to defend herself with the writer never seeming to believe her or offer a shot at redemption. It repeatedly mentions how her reputation is in tatters and tries to find answers to why Lohan is so, well, adrift. In Sheen’s war there’s still the prospect he could win. Lohan, well, she doesn’t stand a chance.