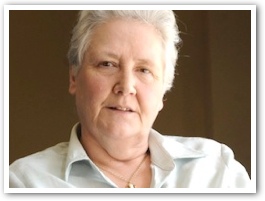 On March 22, Pope Francis created a commission—of four men and four women—that will directly advise him  on policies regarding sex abuse. This has been done a year after Pope Benedict requested Catholic Church authorities around the globe create national guidelines on how to protect children in the Church by the end of May 2014.

One commission member in particular is getting extra media attention—Ireland native Marie Collins. She was abused by a Catholic priest, while she was in the hospital at the age of 13.

When she reported the sexual assault to church authorities, she was blamed. Since the abuser was a priest, she was told, he could do no wrong. She told the Vatican Insider, “When I left the hospital I was not the same child who had entered. I was no longer a confident, carefree and happy child. Now I was convinced I was a bad person and I needed to hide that from everyone.” With time Collins began speaking out, and hasn’t stopped.

Collins told the Toronto Star, “I’m going in there determined to speak up for what is needed. And I won’t be intimidated.”

This statement is easy to believe: it has been proven that Collins is a pushing force for change. After speaking in front of 100 bishops and 40 religious superiors at a 2012 symposium, telling them in graphic detail the abuse she suffered, it was clear her message was heard. RTE News reported that after the event, an African bishop approached Collins saying, “he never regarded the issue as a problem, but having heard Mrs Collins’ testimony, he had changed his mind.”

The Marie Collins Foundation is a U.K.-based organization created in 2009 in order to equip agencies “with the knowledge and understanding they need to respond to children who have been abused via the internet and mobile technologies.”

In her book, Seeking Wholeness, Catholic Bishop Marie Bouclin explains how many women feel after being sexually abused in the Church:

“They feel it was all a misunderstanding, not a case of deliberate abuse of power. They tend to forgive immediately, because, after all, Jesus forgave and the Gospels command us to do the same.”

She continues to write that these women are reluctant to seek any kind of therapy, because it may mean consulting someone who wouldn’t understand their religious beliefs.

Arguably, years of Church conditioning play into the fear of reporting assaults. On top of that, the majority of sexual assaults, in and outside of the Church, go unreported— despite the fact that over half of the female population has experienced some form of sexual abuse.

The Church has been gaining attention about pedophilia committed by clergymen for years, and it the crimes have gone on even longer. “Historically, the Church has typically addressed abuse as an internal matter,” reads a Public Safety Canada report, Sexual Abuse in the Catholic Church. “Abusive priests received sanctions and treatment from specialized Catholic service agencies, with relatively few of the offending priests becoming involved in the criminal justice system.”

Roman Catholicism is the largest Christian religious group in Canada, and our country’s priests are not immune to these crimes. Joannes Rivoire, a former Iqaluit priest now hiding in France, refused to speak with The Canadian Press about his warrant for four reported incidents of sexual abuse.

Collins, and others working to widen the Church’s blind eye to its in-house crimes, will make it harder—ideally, impossible—for those like like Rivoire to run away.