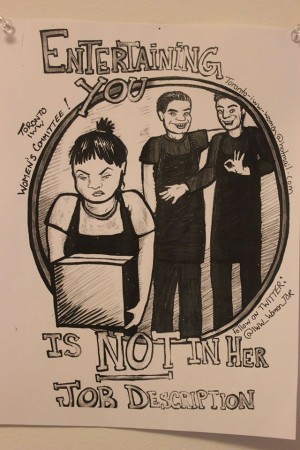 Since the Labour Day weekend new posters have been popping up throughout Toronto. They read messages like “Strength in numbers” and “Entertaining you is not in her job description.” The Toronto IWW Women’s Committee adds their Twitter handle to the posters, inviting questions and thoughts and encouraging dialogue regarding the harassment women face in the workplace as well as on the street (Other posters saying, “Don’t catcall us, creeps!”)

According to Canadian Labour Relations, a business resource on Canadian labour laws, “Equal pay for equal work is a major issue in many industries and areas of business.” Indeed a woman will make 74 cents to their male counterpart’s dollar—but that isn’t the only problem women face when going to work. Whether she is high up on Bay Street struggling to prove her worth or serving drinks across the street while being grabbed, or even being followed home after finishing a late night shift, a woman often faces discrimination and harassment in the workplace. Like Canadian Labour Relations points out, some employers’ fear women may not be as dedicated as men in the same job because women will be too family -focused, or not tough enough.

Though the site says there is no evidence proving women are too soft at work, there is evidence to the contrary: “In fact some studies show that women in positions of power are forced to be more cut-throat in order to keep the respect of others and to be considered one of the boys.”

The resource page also says women make up the majority of victims of sexual harassment in the workplace; the offenders, according to the site, could be supervisors, fellow workers, customers, suppliers and vendors.

“The struggles women face within the workplace is some of the most subtle, often ignored and over-looked ones,” says IWW women’s  committee chair Summer (who asked we not print her last name).  “Harassment in the workplace is such a common occurrence and we need to bring these issues to the fore-front.”

The committee’s meeting spaces are inclusive to all woman identified and gender non-conforming people. Though it is encouraged, a committee member does not have to join Industrial Workers of the World, a member-run union open to all workers.

“When we form committees of women we create a space for sharing our struggles with each other and more importantly, producing solutions together,” says Summer. “We allow ourselves to make demands with our collective action and, hopefully, get results. Strength in numbers, right? I believe women’s committees help strengthen the labour movement as a whole.”