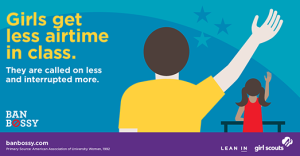 Just yesterday I was laughing at how all of my daughter’s friends seemed to be just as bossy as her. They are all about six years old; very sure of who they are and what they want. At first, I thought it was a compliment. But then I thought: Why the need to point these attributes as bossy? Would I have done this had my nephew and his friends behaved the same way? Through some more research, I came across a project that points out that the “bossy” adjective, is a loaded one.

“Calling a girl ‘bossy’ when she asserts her voice—a word we rarely use for little boys—sends the message that girls should not speak up,” reads Leadership Tips for Parents by LeanIn.org and Girl Scouts of USA. The downloadable PDF is part of an initiative by the two groups: Ban Bossy.

When telling our children that girls who speak up are bossy, this foreshadows the unnecessary future dilemmas for these children as women: don’t be too assertive, keep your voice down, stop being so sensitive. In other words, it teaches that leadership roles are not for girls and women. If speaking up is equated with bossy, and bossy is bad, the message becomes: don’t be bossy; don’t speak up. We see this play out in school all the time: the hands of girls stop going up in grade school, and sentences begin to start with, “I’m not sure, but.” Statements are posed as questions, so as to not appear too confident—too bossy—in what is being said.

As adults, we need to be careful with pushing this mindset: it is already promoted enough in the media, and we can’t be everywhere the kidlets are to fight against these stereotypes.

Gloria Steinem is quoted in saying, “If you and I [women],  every time we pass a mirror, downgrade on how we look or complain about our looks, if we remember that a girl is watching us, and that’s what she’s learning.”

This applies by how we speak and act as well. Women should not be afraid of asserting themselves: saying no to that extra volunteer project that there is no time for, sending bad food back at a restaurant, telling someone how they feel, asking questions.

The men in a young girl’s life are just as important. Ban Bossy’s booklet advises that dads and granddads be aware of their own words and actions: “They matter. Show respect for the girls and women in your life and in hers to help her develop high expectations of other men. Speak out against cultural messages that tell her to value her physical appearance above all else. Let her know you value her for who she is inside.”

International Women’s Day just passed, and we gave deserved nods to the women who fought for our rights and to give us the push to continue future work. By teaching our girls progressive values—letting them know they are valued—we are investing in a stronger future for women.