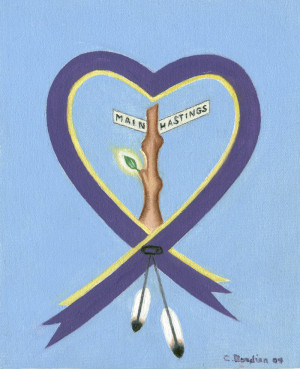 Starting in Vancouver after a 1991 murder of a Coast Salish woman in the Downtown Eastside, Canadian cities have participated in the Annual Women’s Memorial March, to honour the lives of missing and murdered women, every Valentine’s Day.

“This event is organized and led by women in the DTES [Downtown Eastside] because women—especially indigenous women—face physical, mental, emotional, and spiritual violence on a daily basis,” the Feb 14 Women’s Memorial March Committee writes on the march website.

The site describes the January 1991 murder on Powell St.  as a catalyst that moved women into action. The victim’s name is not shared out of respect for the wishes of her family, who will attend the Vancouver event at the Carnegie Community Centre Theatre on 401 Main St.

According to “The Tragedy of Missing and Murdered Aboriginal Women of Canada” a 2011 report by the Vancouver Police Department and the Women’s Memorial March Committee, though Aboriginal women make up only four percent of the Canadian female population, they also make up the majority of missing or murdered women.

“Out of this sense of hopelessness and anger came an annual march on Valentine’s Day to express compassion, community, and caring for all women in Vancouver’s Downtown Eastside, Coast Salish Territories,” reads the February 14 event description. “Twenty years later, the women’s memorial march continues to honour the lives of missing and murdered women.”